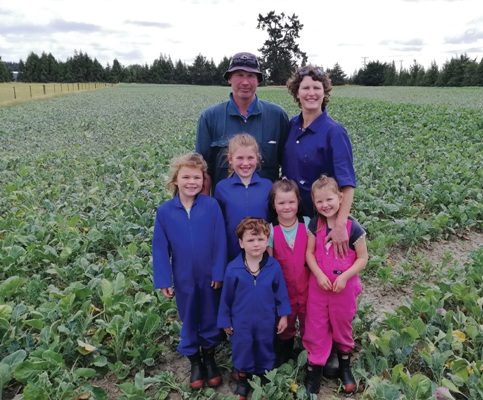 The herd was fitted with high-tech smart collars in 2018, which monitor a cow’s health and issue an electronic alert when she’s on heat.

The Semex ai24 collars and data transmitters cost the Forsythes almost $120,000 to install.

“The collars have resulted a huge improvement in the reproductive performance of our two-year-old heifers. They’re getting in-calf earlier,” Hugh says.

“Previously a heifer with an undetectable silent heat wasn’t being picked up when we monitored pre-mating heats.

“Consequently, we’d assume she hadn’t cycled, and we’d give her a CIDR (controlled internal drug release) insert to bring her on heat.”

Half of the couple’s two-year-old heifers were receiving CIDRs prior to the herd being fitted with smart collars. The figure’s now just 10%.

“That was a significant cost. Across the entire herd we would have used up to 250 CIDRs a year. It’s now less than 80,” Hugh says.

The Forsythes expect the collars will have paid for themselves by the end of next season.

“There are no more missed heats, we don’t have to buy tail paint and other heat detection aides – or bulls, plus I no have to be in the shed every milking during mating.”

Prior to the start of milking, the ear tag numbers of cows identified as being ready to inseminate are manually entered into Protrack.

“Currently the ai24 system and Protrack aren’t compatible with each other. It would be a big time-saver if they were,” Hugh says.

The Forsythes milk year-round, meaning they mate and calve twice a year.

The couple’s best 200 spring-calving cows are mated with sexed Holstein Friesian semen from Semex. The rest of the herd is mated to a beef breed.

“We’ve been using sexed semen for five years. We use it purely for faster genetic gain,” he says.

“We only want to keep replacement heifers from our top cows. It helps avoid the frustrating situation of good cows having bull calves.”

The mating window for a cow receiving sexed semen is more precise. She has to be inseminated between 16-20 hours after a standing heat.

“That’s another area where we’ve found the smart collars invaluable. They can pinpoint when the heat ended. It’s helping us achieve conception rates of 60-65% with sexed semen.”

The Forsythes do artificial insemination twice a day during mating.

The beef breeds they have previously used include Wagyu. Last year, meat from one of their animals won the World Steak Competition in Ireland, for a marbling score of seven and above.

They now use Hereford and Speckle Park sires.

“That’s a major benefit of having Holstein Friesians. We can make massive money off our beef calves,” Hugh says.

“I’d hate to be a 50/50 sharemilker with a Crossbred or Jersey herd because the majority of their unwanted calves end up as bobby calves.”

The Forsythes do one round of artificial insemination on their yearling heifers using Holstein Friesian semen. They’re tailed with bulls.

Prices for beef calves are lower in the South Island than the North Island. They sell Holstein Friesian bull calves for $100 and Speckle Park calves for $200.

“The rearer who bought the majority of our Speckle Park calves last spring has already placed her order for this year,” he says.

It means from a herd of almost 700 cows, the business is only producing 30-40 bobby calves a year.

Empties and late-calving cows are milked through the winter, along with 120 cows which calve in the autumn.

“We have a 95-hectare run-off about 1km down the road. The herd is dried off in groups based on calving date and wintered on crops there,” he says.

Kale and fodder beet are grown on the dairy platform to supplement the milkers’ feed ration during the winter. The farm does not have a feed pad.

“We put a custom blend through the in-shed feed system. It changes depending on the herd’s dietary requirements,” he says.

The Forsythes work with a company called Ruminate, which tests pasture and crops regularly, and the cows’ blood four times a year.

“Minerals and trace elements are blended with the dry feed as its flows into the milking shed. Proliq is squirted on to the ration to make it more palatable,” Hugh says.

“The cows are drinking significantly more since we removed minerals from the water supply.”

The Forsythes’ ideal Holstein Friesian is one with good capacity, teat placement and feet, that’s highly fertile and will live a long time.

The sire they’re most impressed with who has left his mark on the herd is Mainstream Manifold.

“I have used Manifold semen for the last eight years. If I could have an entire herd of Manifold daughters I would,” he laughs.

“When I heard he’d died, I bought an extra 150 straws. His daughters are exceptional.”

“We’re keen to start getting those animals scored for traits other than production and classified. It will help us refine our mating decisions.

“Using sexed semen means the number of bulls we have access to, is limited.

“But we work closely with Semex and buy semen as it’s being processed overseas, which gives us access to a bigger pool of sires,” he says.

The couple moved to South Canterbury from the Waikato in 2014. Their farm is irrigated with centre pivots.

“In our first couple of seasons here this region was hit by the worst drought locals could remember,” he says.

“There was no water for irrigation. It ran out. It was a shock. But our experience with droughts in the Waikato meant we could manage our way through until it rained.

“When it gets dry farmers in the North Island have access to more alternative feeds, like apple pulp or vegetables, we’re quite limited down here.”

Hugh and Jennifer are now in their sixth season on the property where they live with their five children Tilly (8), Isla (6), twins Maeve and Olive (4) and Quinn (2). They employ one full-time staff member Sören Thiess and permanent relief milker Karen Walker.