Sheep farmers are riding the back of a boom in ewe sale prices. AgriHQ analyst Reece Brick finds little for red meat farmers to complain about this season.

Remember back in early spring when everyone was freaking out about the country going dry? Spring rains hadn’t shown, forecasters were talking about an El Nino and everyone was getting ready to destock.
Well, fast-forward to early 2019 and the situation couldn’t be any further from expectations. We are in one of those rare positions where sheep, beef and deer farmers have very little to complain about, which is especially unusual mid-summer.
I could focus on a number of different aspects which illustrate this situation, but the main beacon of confidence is coming from the breeding ewe market.
Various ewe fairs through the lower North Island have reported very heavy competition for what’s available, underpinned by very strong mutton schedules and a confidence in the lamb job last seen more than half a decade ago. 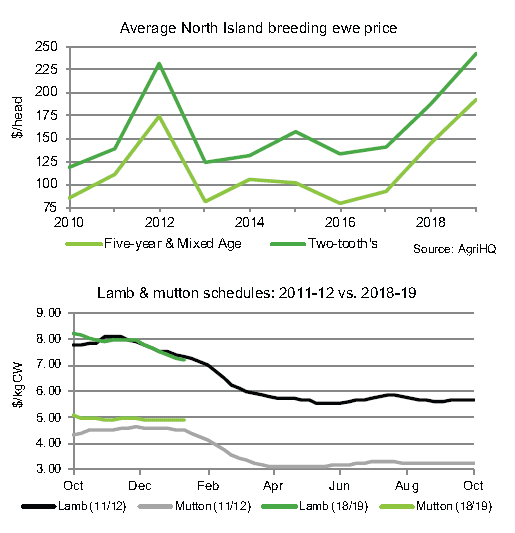 As an example, almost 13,000 two-tooth ewes were sold between the Matawhero, Stortford Lodge and Dannevirke ewe fairs in early-January at a very impressive average price of $245/head. In the five years prior they’d averaged $145, last peaking at $230 in 2012.
While this is very good news for vendors, it is quite a gamble for buyers. A few buyers back in 2012 definitely went on to rue buying ewes for the amount they did quite quickly when lamb schedules went on to collapse that year.
So what’s the risk this time?
Both schedules and European lamb markets are following quite a similar pattern to back then – the former slowly falling back and the latter attempting to pull values down from record levels. However, there is one key difference this time – China. Back then NZ was only beginning to gain traction in China, whereas now they dominate the market for lower-value lamb cuts and mutton.
Some people are sceptical about whether Chinese interest should be reason enough to be confident, which is understandable when it’s proven a volatile market in the past. With that said there are two key reasons to at least have some faith.
First, interest is underpinned by traders with a history of trading sheep meat, unlike other years where opportunistic commodity traders were looking to make a quick buck.
Secondly, China is managing an outbreak of African Swine Fever. To cut a long-story short, massive numbers of pigs are being culled, limiting pork production, and pushing consumers towards other meats such as lamb and mutton.