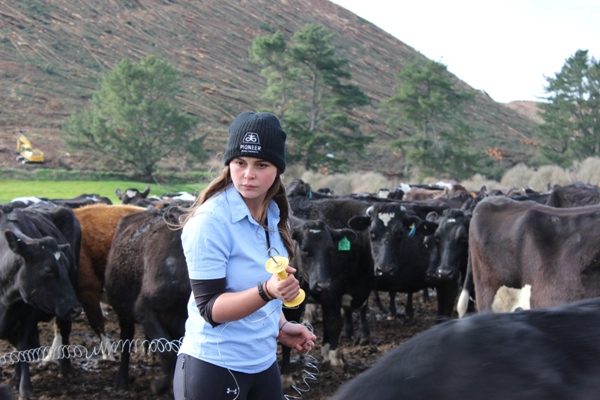 When Alexandra Lond began studying English Literature in 2012, the thought that, seven years later she’d be in Reporoa, New Zealand, managing an 800-cow herd would never have crossed her mind.

English woman Alex’s route into farming began while studying at Reading University. She befriended agricultural students during hockey practice, after hearing all the farming chatter “made me want to know more.”

A friend put her in touch with Sally Manford, of Hinxdon Farm, in Kent, and volunteered her way into a job.

“I spent two months shadowing the milker, working for free, before heading to my day job in town,” she says.

“I literally had no idea what I was doing, I just watched and learned, and after a while I was milking on my own. I like the fact that I can achieve so much in the three hours before I’d normally get up for an office job,”

In a short time Alex was well and truly bitten by the dairy bug and, in September 2016, her flights were booked to the other side of the world to try her hand dairy farming in NZ.

Alex arrived without a job or any connections in the industry. But, with a strong drive to learn about the more outdoor-style of dairy farming, within a month, she had found a job as a farm assistant on a 550-cow farm in Reporoa.

“I love that dairy farming is all outdoors here – we really utilise the land. I also love working outside from sunrise to sunset – waking up at 4am never gets any easier but seeing the sunrise every morning makes it worth it.”

After a stint as 2IC on Tirohonga Farm, Alex returned to Reporoa to manage her current farm, Harlaw Downs.

Harlaw Downs has 800 mostly Kiwicross cows on 271 hectares and their targeted milksolids this year will surpass 300,000kg/ha. The farm calves in spring and has 180 R2s calving a few weeks before their cows. They are aiming to rear 150 replacement heifers. Harlaw Downs is a system 2-3 farm, growing maize, barley and grass silage on-farm and for the first time last season they fed kiwifruit.

“It was an extra treat for the cows and helped maintain production at the end of the season.”

They also winter some of their cows on swedes.

This is the largest farm Alex has worked on and it’s a challenge she is thoroughly enjoying.

“I’m doing big-scale farming to learn, to throw myself in the deep end. My ideal herd would be 300-350 cows. I’d also like to see how they dairy farm in the different regions of New Zealand. Eventually I’d like to get into contract milking.”

The owners of Harlaw Downs, Glen and Paula Crafar have been hugely supportive of Alex in both her work and other agricultural pursuits such as participation in local discussion groups and entering the Dairy Manager of the Year Awards.

Alex is also involved in her local Young Farmers as co-vice chair. “Our Young Farmers is very involved in the local community,” which is what attracted Alex to Reporoa, along with the discussion groups in the area.

Alex and the rest of Reporoa Young Farmers are in the midst of arranging and hosting the district final for Young Farmer of the Year which is keeping them busy.

Not one to shy away from a challenge, and as tough as the Dairy Manager of the Year awards were, Alex says she’ll enter the Dairy Industry Awards again next year.

“It really boosted my passion for the industry, realising there are so many people in the same boat as you,” she says.

“It was great, but it also made me realise I still have a lot to learn. My goal is to win it next time.”

Alex also credits her time with the judges as invaluable, learning from their different specialties was something she especially enjoyed.

“Although, my favourite part of the competition was basically the personal stuff, what got you here and talking about your passion.”

The enthusiasm Alex has for agriculture is evident. As someone who didn’t grow up farming, looking at the industry from a different perspective has given her a hugely positive outlook.

“I’ve met so many amazing people that love their job and that’s the most important thing I’ve learned coming here. You’ve got to love your job and I’m so fortunate that I’ve found my passion in dairy farming and I want to keep working in the industry and progressing for as long as I can.

“No one realizes how smart farmers are until you’re actually farming. They don’t realise all the different skills you need every day”

Although Alex grew up in a rural village in England, her interaction with farming before the age of 23 was minimal. Which is impressive considering her current role.

“I think the biggest shame is agriculture isn’t taught at schools at home in the UK. If you’re not from a farming background, you don’t find out about it until you get a job of your own. You’re never taught about the opportunities – and that needs to change.

“I have struggled to understand why farmers are continuously victimised when they are all working to provide food and necessities to the entire world. How anybody could ever think that we would ever survive without them?”

“Even now after calving loads of cows, I still enjoy the feeling as you literally bring life into the world and help both calf and cow to thrive afterwards.”

At the other end of the spectrum, she says she feels helpless when she has done everything she can to help, and sometimes it’s still not enough.

Most enjoyable has been competing in last year’s Dairy Industry Awards and making it to the final for the Manager of the Year for the Central Plateau region.

“Actually realising how much I knew was a bit of a surprise and being able to compete against people as passionate as I am who were all so supportive of one another was an amazing thing to be able to do.”

She says the most difficult thing about dairy farming is when she struggles with the changing of season/time of year.

“I worry about how much I should be feeding and when to speed up or slow down feed.

“I am lucky the farm owner is on board and helps me out when I need it, and I also use a lot of the DairyNZ online tools to help determine feed requirements/round lengths at different times of year.”

“I have the Primary ITO Level 4 in Dairy Farming qualification here in NZ – I passed that in June of this year and would like to do the Level 5 in the far away future.

As to the English Literature degree? Well, she doesn’t regret it.

“I am still glad that I did my degree, and feel it still helps me every day as I enjoy a lot of the bookwork involved in managing a farm, and fill up as much of my spare time as I can (that is, when I can stay awake doing so) reading up about all the different methods / new approaches to dairy farming.”

She also enjoys reading about the good old-fashioned ways of farming.

“I recently finished ‘Up with the Lark’ by Joan Bomford and I recommend that everybody interested in any type of farming reads it.”

“I also like the idea of one day having a column myself, to write about dairy farming and my own experiences day to day on farm.

“If I was still in the UK, I would no doubt be in an office job, maybe something to do with publishing or writing articles for a small magazine somewhere (while relief milking either side of my 9-5).”

“More than anything else (besides my friends and family) I miss a good old English pub! There really is nothing better than a dog walk ending up at a pub, where you can enjoy a warm, flat local ale and a good book while the English rain falls relentlessly outside.”

(We can help with some of that. Alex is going to start writing a Milking Platform column in 2020 – watch out for her take on farming and life in Reporoa. Now we just need to find her a good Reparoa-based Rubbity-dub… The Pig and Whistle? The Kings Head…the Plough and Sheaf…? Ed.)