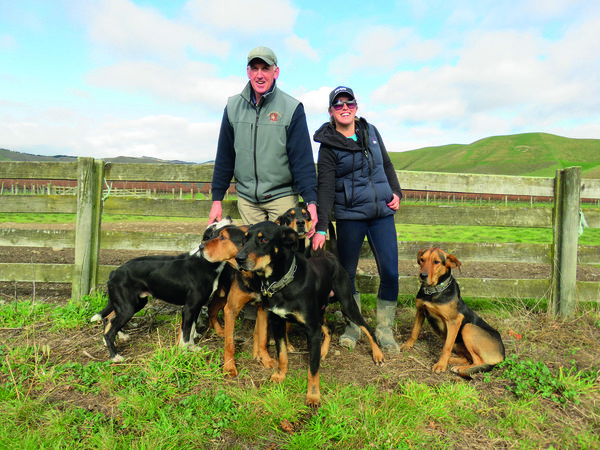 As with many aspects of farming, many more women are becoming involved with dog trials. Annabelle Latz caught up with a father and daughter team. Photo: Annabelle Latz.

For Roger and Steph Tweed, competition between them does not feature in dog trials.

Their competition is the sheep, and the desire for their dogs to work well.

“Because the dogs aren’t always good! They can be naughty, and some are naughtier than others!” Roger says while competing at the National Sheep Dog Trials at Meadowbank, Marlborough, at the end of May.

“And the cool thing about this sport is that you can be competitive at any age, and what happens today could have happened 40 years ago.”

As their teams of dogs played at their feet, you could tell the love for the sport is genuine.

Roger is based at the family farm at Waitahuna, South Otago, and Steph, 26, is block manager at Mt Cass, North Canterbury, where she has 10 dogs of her own.

“I always try and carry an extra dog; get them going, and flick them on.”

They’re members of the Waitahuna and Omihi collie clubs, respectively.

Roger has always known Steph had an exceptional knack with working dogs.

“When she was little, I couldn’t even tell her when I was picking up a pup, because she’d keep bugging me. ‘When are we going to get that pup?”

Steph attended her first National Dog Trial competition in 2013, in Geraldine, and at 21 she was one of the youngest competitors, and certainly one of the few females in the sport.

“Things have changed, there’s now heaps of us,” Steph says, counting on her fingers about 15 or 20 females regularly on the dog trialling circuit.

Since Steph was about 12 years old, Roger has handed over dogs of his to her, ones he hasn’t been able to gel with.

“These girls, they have a nice kindness with their dogs. Steph has trained a few young dogs that I wasn’t getting on too well with.”

“Second-chance dogs,” Steph says, who started dog trialling when she was about 15. When Steph finished school she went straight to Waipori Station near Lawrence, with her two dogs at the time.

Getting into the short head runoff last year with her dog Flirt in Warepa, South Otago, in the South Island final has been the highlight so far.

A standout moment for them both was collectively dominating the top spots in all four courses at their local Waitahuna dog trials, just a couple of months before the Nationals.

Roger took out the long head, short head and yard, and straight hunt, while Steph took the honours in the zig-zag, in which Roger finished second, and finishing second to his daughter made the day even more special.

“It’s your bond. You get really attached to your dog. And the bond between you and them to compete, it’s a real thrill. Your dog works well for you, and you win, or whatever, or successful, it is a real thrill, it gets quite addictive,” Roger says.

His first involvement with dog trialling was in his early twenties at his local club, his job was liberating sheep. He slowly picked up bits and pieces about the sport by watching others.

“My whole life I’ve just listened to my peers and learned off them, you pick up bits off all of them.”

Dog ‘ammunition’ has been a mitigating factor in their success and fun. Between them they’ve bred some quality dogs.

Heading dogs must have a nice approach to stock, a huntaway must have adequate noise, and even as young pups Roger and Steph can see ability.

“You’ve got to have something good-natured, something that’s easy to have around and not going to drive you nuts,” Steph says.

Straightness is important, and a nice head, Roger says.

“But a lot of ugly dogs do well in these things too.”

Some things have certainly changed; the relationship with their dogs has softened, there are training days for all abilities, and the flow of advice and support is much better.

“Every year I put another page in my diary, I’m always learning,” Roger says.