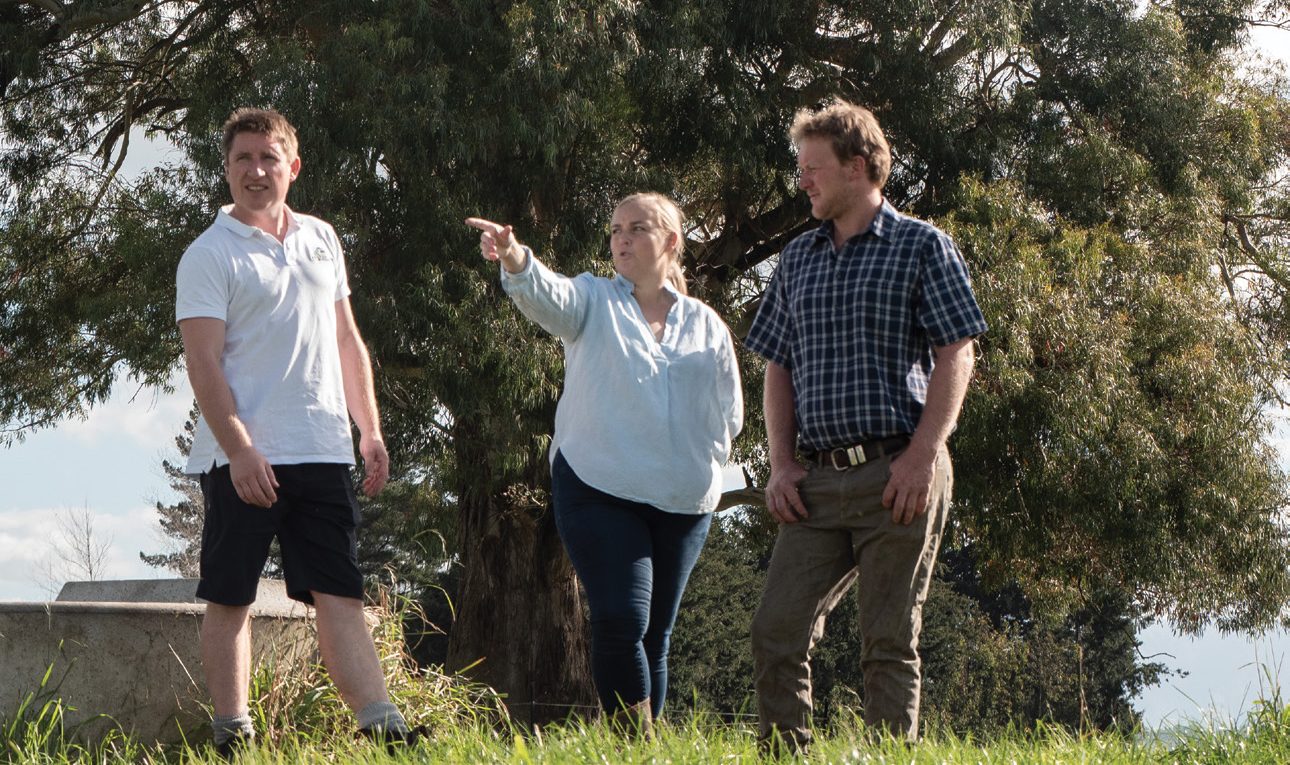 Pareka farm has gone through a significant change in farm system this season with the aim of cutting nitrogen losses and methane emissions, paving the way and creating learning opportunities for others. Anne Lee found out how they got on.

It sounds easy – at least to the critics and some who write the rules – cut cow numbers and all will be well.

You will lighten the load on the planet and your reduced costs and improved per-cow performance will help hold up your profit.

That’s the theory, and as others such as Lincoln University Dairy Farm have shown it can be done but it’s not necessarily easy.

Southern Pastures’ Pareka farm is coming to the end of its first season putting the theory into practice.

For experienced dairy farmers but first year contract milking Pareka farm, Stu and Amy Vanderweg, it’s been a year of learning not only the new farm but the system and all during a season that’s created its own challenges.

A reduced stocking rate has helped them stay closer to budgeted production than many others in the region and importantly they’ve been able to manage the changes so that significant reductions in both methane emissions, nitrous oxide emissions and nitrogen loss have been achieved.

The 286-hectare property at Te Pirita near Hororata, Canterbury, is a relatively new conversion, moving from partially irrigated sheep and beef country to fully irrigated dairy in 2016 with the advent of Central Plains Water (CPW).

While its nutrient loss budget comes under the immediate auspices of CPW, as part of the irrigation scheme’s nutrient discharge consent requirements and regional council regulations Pareka was facing a 30% reduction in nitrogen loss from baseline losses by 2022 – this year.

James says that while that created an imperative to make changes, the farm had been set up and run very much within Southern Pastures’ ethos of sustainable dairying.

Two of the farm’s six centre pivots have variable rate irrigation, soil moisture probes are installed and used for scheduling irrigation, effluent storage capacity is beyond what’s required and effluent is spread on 70% of the farm area through the pivot irrigators.

Pareka’s need to reduce nitrogen loss was taken as an opportunity rather than a burden.

“We wanted an example for our own farms within the group of how we can make a systems change, lowering stocking rate and farming with less inputs.

“We can take what we’ve learned and share it with our other farm teams.”

James says the farm was set up to milk 1050 cows but even though it was just six years ago the pace of change means it’s operating in a different environment now to what it was then. “We were focused on limiting nitrogen loss but there was no synthetic nitrogen cap then and there’s also a much stronger backdrop of greenhouse gas emissions now.”

The changes had been developed using feed budgets with the aim of creating a low nitrogen production system. 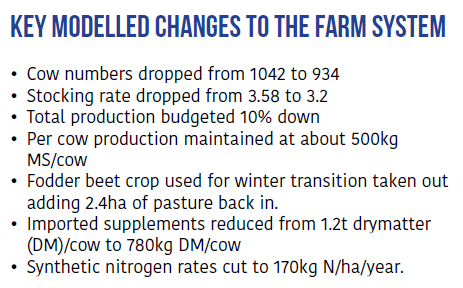 Stu and Amy have been farming together for 11 years, starting their farming career under Amy’s father where they gained large herd experience – up to 3500 cows through two farm dairies.

They’ve also been equity managers on a 500-cow farm and still retain their shares in that farm.

Because this is their first season on the farm, they came in with a contract based on the current stock numbers and farm system.

With more farmers lowering stocking rates the issue of renegotiating contracts with contract milkers and sharemilkers is a consideration, James says.

In retrospect the past season has been one of the more difficult pasture growth seasons in several years with many farmers across the district reporting drops in production of 5-7% due to poorer grass growth.

“We had a false start to the spring – growth started well then it stopped then it started and stopped again.

“We had multiple periods right through into January where grass was trying to run to seed head,” Amy says.

“Managing surpluses and keeping quality was probably the most difficult thing we faced in this lower stocked system,” Stu says.

The couple say although the lower stocking rate gave them more square meters of pasture per cow it tended to magnify rather than ease the impact of the stop-start growing conditions.

“We reacted quite aggressively in shutting up the surpluses in spring but then we couldn’t get contractors here because they were facing labour shortages due to Covid and also battling with the weather.

“Then when they came the weather cooled down again and we fell into a feed pinch,” Amy says.

That timed with mating and the six-week in-calf rate suffered.

“I think next year we’ll call in the contractor earlier for smaller areas – waiting and taking out larger areas is riskier and harder to recover from if something goes wrong,” she says.

James says data from across the farms shows pasture production is likely to be down by about 0.5-0.7t DM/ha this season across the district.

Lower nitrogen rates will have had some effect too although hard to quantify amid the seasonal effects.

Predictions are they will come in just under the 15t DM/ha harvested figure they were aiming for and they’ve managed to keep bought-in supplements very close to budget.

They use 260kg/cow of barley over the season and use maize silage as well as pasture silage.

The maize has a positive environmental impact and helps cow condition through autumn.

It’s also more difficult to source grass silage at guaranteed quality specifications than it is for maize.

Stu and Amy say by early May they had put on 140kg N/ ha as fertiliser so would come in well within the 170kg N/ha budgeted.

Less nitrogen was applied on the fronts of paddocks – equating to about 10% or 1ha of each paddock, with fertility maintained by the cows through nutrient transfer given they spend more time in that area.

The large effluent ponds were cleaned right out with the heavier, more solid effluent spread by a contractor using an umbilical cord and injectors.

Tests showed those effluent applications were equivalent to 70kgN.

On the paddocks where it had been spread, they were able to skip two rounds of urea.

Taking out fodder beet, which had previously been grown to transition cows ready for wintering, reduced nitrogen loss numbers in the Overseer budget.

To manage that change, earlier calving cows will be dried off sooner so they can transition onto fodder beet at the wintering block.

“There is an element of feeling like you’re just transferring the issue but we’ve used methods like sowing oats and an annual into those areas on the milking platforms to try and limit losses but it’s very dependent on weather and soil conditions as to getting it in,” James says.

“It does mean we start spring with 100% of our effective area in the rotation if we’re not growing crop here,” Amy says.

Like so many other farmers they’ve also had to deal with extra mouths on the farm with culls staying into May.

Fertiliser, feed, fuel and labour costs have all risen dramatically this year squeezing the margin although the record payout will help soften the squeeze little.

“Profit is our focus but we’re all vulnerable to compliance and regulation risk. Now we’ve worked through this season we can see what we’ve been able to achieve in terms of our environmental goals – and that’s been significant.

“We can also see how managing the change has looked for us – we have information now and experiences we can share with others,” Amy says.

“It’s been a tough season to implement something like this and make comparisons with previous years because it’s been quite different.

“We’re happy with what we’ve achieved, though – an 11% drop in methane and coming in, meeting the nitrogen loss requirement, it is a significant achievement.

“What will be interesting is how this looks next season with the learning everyone’s done bedded in, ” James says.