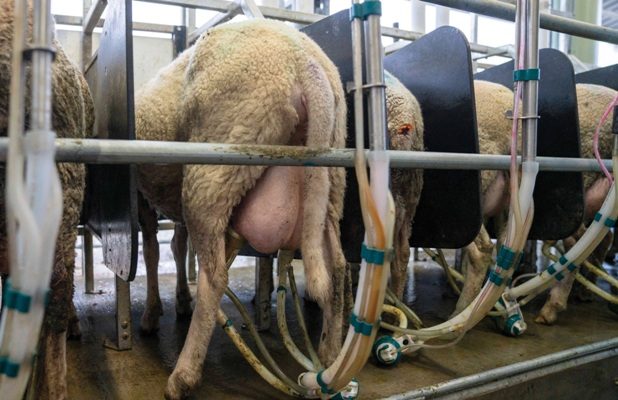 Production on Spring Sheep’s dairy farms is ramping up as the genetic gain increases. The company’s two pilot farms in the Waikato are proving a viable option for conversion. Sheryl Haitana reports.

Converting a small dairy cow farm in the Waikato to milk sheep could be a better option for farmers than to try and deviate into non-dairy land uses, Spring Sheep Milk Company business manager Thomas Macdonald says.

“This is an option where farmers can take their skill set across versus growing asparagus for example.”

An outdoor sheep farm will leach about high 20s to low 30kg N/ha in the Waikato dairy soils, he says.

It’s a key driver for why a dairy farmer could opt to switch their cows for milking sheep to ensure they have a sustainable and profitable business within land use change regulations.

Spring Sheep is looking for three suppliers to come on board in 2020 and a further three or four in 2021 from within the Waikato region.

The milk is one of three income revenues for sheep milk farmers. They also get a significant portion of annual income from their livestock trading each year. Farmers can rear both ram and ewe lambs and sell surplus stock. Generally, a milking flock will lamb between 150% and 180% meaning there are still surplus animals for sale after ensuring healthy flock replacement.

They also get an income from their wool, albeit minimal at the moment. The sheep are shorn twice a year. Spring Sheep have a converted shipping container set up with a three-stand shearing stand that farmers book as required for their farms.

Most important with any conversion is the support and technical knowledge available throughout the early years. Spring Sheep will work closely with new suppliers to ensure they have the support and knowledge they need, based on its own three farm operations, Thomas says.

“It will work like a plug and play system.

“Because we are in a position where we don’t need every single farmer in the Waikato we are looking for partners that fit with Spring Sheep’s strong consumer focus which extends to the farms, farmers who are proud to be producing a great product, respect the environment and have high animal welfare standards.”

Spring Sheep’s pilot farms in the Waikato are aimed to be a guide for future suppliers who convert to milking sheep.

Spring Sheep lease both their pilot farms, Monavale and Tauwhare. Monavale, is the high-specification hybrid farm system with an indoor feeding and lambing barn.

It was built from scratch on a former maize block and cost about $3 million for the new barn, dairy parlour, fencing, vehicles and machinery.

The Tauwhare farm is an all-outdoor pasture system and was converted from a former cow dairy farm. The conversion cost was about $600,000, which included extra wires on the fences, all new concrete, plant, yards and vat in the existing herringbone.

The conversion of a former cow dairy farm can cost between $300,000 and $800,000 depending on the quality of existing infrastructure, Thomas says.

While both systems are operating above expectations, Spring Sheep sees strong potential for the outdoor system as it is more aligned to current dairy cow systems.

Spring Sheep Milk – owned 50:50 by Landcorp and a number of independent NZ investors – is the industry partner of a Primary Growth Partnership (PGP) programme with the Ministry for Primary Industries (MPI).

“Every year we are seeing a significant increase in yield, from both the farm system practices and genetic improvement.

“It’s a very exciting journey, we are starting to see some of the benefits of the research and development and the genetics in the system.”

The replacement rate at both farms is 50% with the milking mob consisting of 50% hoggets each year.

“The genetic gain is so powerful with first milking hoggets are out-producing their mothers from year one,” Thomas says.

The genetic gain every year for yield is phenomenal because it is so quick, Thomas says.

The lambs are mated and are in the farm dairy being milked in one year.

The ewes produced 265 litres/sheep last year in a 225-day lactation, the team had to dry off early for more breeding work so the target is above 300l/sheep this year on both farms.

Having such a high replacement rate means Spring Sheep will be able to supply a flock to incoming suppliers without them having to breed their own.

Monavale is a hub for research and development for the sheep milking industry, where all lambs are recorded and DNA tested. All sheep are weighed, and body condition scored three times a year, they have milk meters in the farm dairy to measure daily yield. These measurements are coordinated by Spring Sheep’s genetic development manager and ensure new suppliers will have access to the best possible sheep.

The hybrid system at Monavale is the best of Europe and NZ combined, with the sheep indoors and grazing outdoor on pasture, Thomas says.

During the busy spring period the sheep spend most of their time inside the barn, grazing the paddocks between the morning and afternoon milkings once lambed. Lambing all ewes indoors ensures higher lamb survivability.

The grazing system is switched around in summer where the sheep enjoy the shade of the barn between milkings and are grazed outside at night.

From the end of lactation and the start of the new season the sheep spend the entire time outside.

With all animals wintered on the farms it means they must ensure they have sufficient feed going into winter, Thomas says.

The sheep’s daily diet is 3.0kg drymatter (DM). During lambing they eat about 0.5kg pasture and 2.5kg of total mixed ration (TMR). At their peak they are eating 1kg pasture and 2kg TMR.

They eat a mixture of grass silage, whole-maize grain and DDG.

They are aiming to grow 18 tonnes drymatter (DM)/ha and harvesting about 15.5t DM/ha on the Waikato farm, Thomas says.

The 55ha is split into grazing 1ha paddocks and cropping paddocks which they harvest for grass silage four times a year.

With sheep the silage must be a higher quality so they have to ensure they are harvesting silage at the optimum time and storing it well, he says.

The sheep are on a 25-day round during the peak and they are strip-grazed using a two-wire break fence.

At Tauwhare, the sheep are outdoors all year round and their pasture diet is supplemented with grass silage and 0.5kg meal in the farm dairy each day

Monavale is also the learning hub for the ideal farm management system for milking sheep in Waikato conditions.

The sheep have adapted to the system well and they just have to whistle at the gate and the sheep come into the farm dairy, John says.

“The sheep are very quiet and compliant in the parlour.”

They run the hoggets through the farm dairy for a few weeks before lambing to get them used to going through and eating meal.

The sheep are pretty easy to teach and are similar to dairy cow heifers to train, Scott Davis says.

Scott, 24, has milked cows and goats and says the sheep milking industry is a great option for the next generation.

“It might be a way to drag some young people back to the industry,” Scott says.

“It’s more environmentally friendly than cows, it’s cheaper to set up than cows, and a lot of people seem to be interested.”

They are still dealing with all the typical sheep ailments and it is a learning curve for staff. The benefit of milking sheep is they get to see the sheep twice a day and can pick up any issues quickly and treat them, John says.

The sheep walk through a foot bath once every week or two weeks depending on the time of year. White line is more of an issue rather than footrot, John says.

The barn is a great tool to be able to stand the sheep off when it is particularly wet underfoot.

Facial eczema is still a challenge and they use zinc bolus, minerals and spray the paddocks to manage spore counts.

Mastitis, however, is one of lowest animal health issues they have to deal with, John says.

At Monavale all ewes are lambed indoors to increase lamb survivability and lambs stay with their mothers for 24-48 hours before being taken to the lamb pen.

At Tauwhare, ewes and lambs are put into holding paddocks for two days before the ewes are taken into the colostrum mob.

Lambs are fed adlib on automatic feeders with powdered milk. Each lamb will consume 14kg milk powder in the six weeks until they are weaned. They are also given hay and meal.

All ram and ewe lambs are reared meaning there are no bobbys and no wastage. They are sent to other properties to be finished.

Spring Sheep Milk will be selling sheep milk powder in NZ from October. Kiwis will soon be able to receive the nutritious benefits of New Zealand’s own grass-fed sheep milk, with the launch of Spring Sheep Full Cream Sheep Milk Powder. It will be available this side of Christmas through select stores, which will be listed on their website; www.springsheepnz.com

Farm dairy: 24-aside highline double up