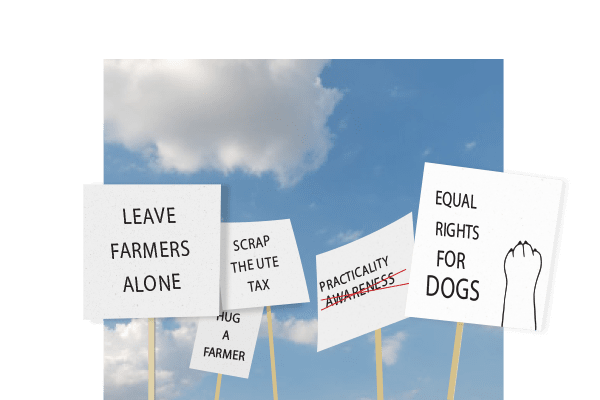 Charlotte Rietveld is feeling bewildered by the Government’s changes but realises there is no going back.

Fancy us coming out in protest. The silent majority, who play by the rules and don’t wish to make a fuss. The beloved rural Karens and stale, pale males. The tax paying backbone that keeps on keeping on. All fearing death by a thousand autonomy-robbing cuts. Pushed so far we’ve finally realised it’s time to shift into low range and dig in. Nurses, teachers, port and freezing workers? They’ve got protesting down pat. But farmers out there brandishing baling twine as the mud tyres squeak past Four Square? Now I’ve really lived.

However, let’s not confuse what is being protested. I suspect I was not alone in feeling 90 years old when realising with alarm I was “hm m”-ing in agreement with Winston’s latest popular but pitiful attack on everything. Oh, how I miss the snappy ol’ silver fox. It was classic Winston and so like Trump, whose harnessing of the US Rust Belt’s dissatisfaction makes more and more sense. Welcome to the world of being a low-value voting group. Labour has little to lose from farmers – we are political capital to be burned at the altar of philosophical change. And right now NZ is in a phase of phenomenally fast change.

Like so many, I hate change. But cringe all you like, NZ has very trendily ‘pivoted’. Jacinda is flat-footing fifth gear with autonomous vehicle-gas in the tank. We are now all about indigenous prioritisation, climate changing environmental evangelism, worshipping well-being, gender diversity, equality everything, cancelling anything, Te Reo Maori everywhere and hate-speech nowhere. Practicality has been trumped by awareness; the majority-rules approach of the past is making way for a more compromising society keenly aware of the vulnerable.

Rest assured you are not alone in feeling drained and bewildered by all this. It strains eyes and ears so much I no longer even begrudge our household’s pre-schooler-owing inability to tune in to radio or TV. Like it I do not, but I am well aware fundamental change is happening for good reason.

Much like my Winston-hmming, the political right-wing will make headway ridiculing this ideological transformation. But no future government will be able to back-peddle on this, our culture is evolving. And it needs to. There has been too much pressure building, too many people are struggling. Struggling not just financially, they feel unrecognised, trapped enabling other people’s lives, with very limited options for their own. The corrective trajectory is undeniably daunting but the ‘road to Zimbabwe’ that Winston once warned of is ideally being averted not advanced. This is a revolution to avoid a revolution.

The key thing for me is differentiating this culture shift from the socialist shafting agriculture is receiving. Neither rests easy with me, but while the cultural changes will eventually be a win for our country, the rural regulatory barrage could go either way.

It’s clear increasing oversight is here to stay and in accepting this, I welcome rural rules. Farming regulations can be held as a badge of environmental honour, useful for both promotion and protection. But hard and fast rural regulations being formulated on the fly are well worthy of protest. All too many policies appear based on slanted science, with imminent deadlines despite impossible alternatives. It’s all stick with not a carrot to be seen.

While unworkable rural regulations are on the protest placards, I suspect it is the combination of these changes that is aggravating farmers into action. A steady stream of environmental policies has coincided with a blistering shift in societal culture. The result is farmers feeling utterly indignant. The hard daily graft to get this country to the prosperous place it is now is being ignored, instead we are the privileged who have ruined the environment. All prior onfarm environmental efforts have been belittled, hastily replaced with voter-pleasing short-sighted showmanship. If we want to be heard and make headway for our farming future, it is this and this alone that we need to be protesting.