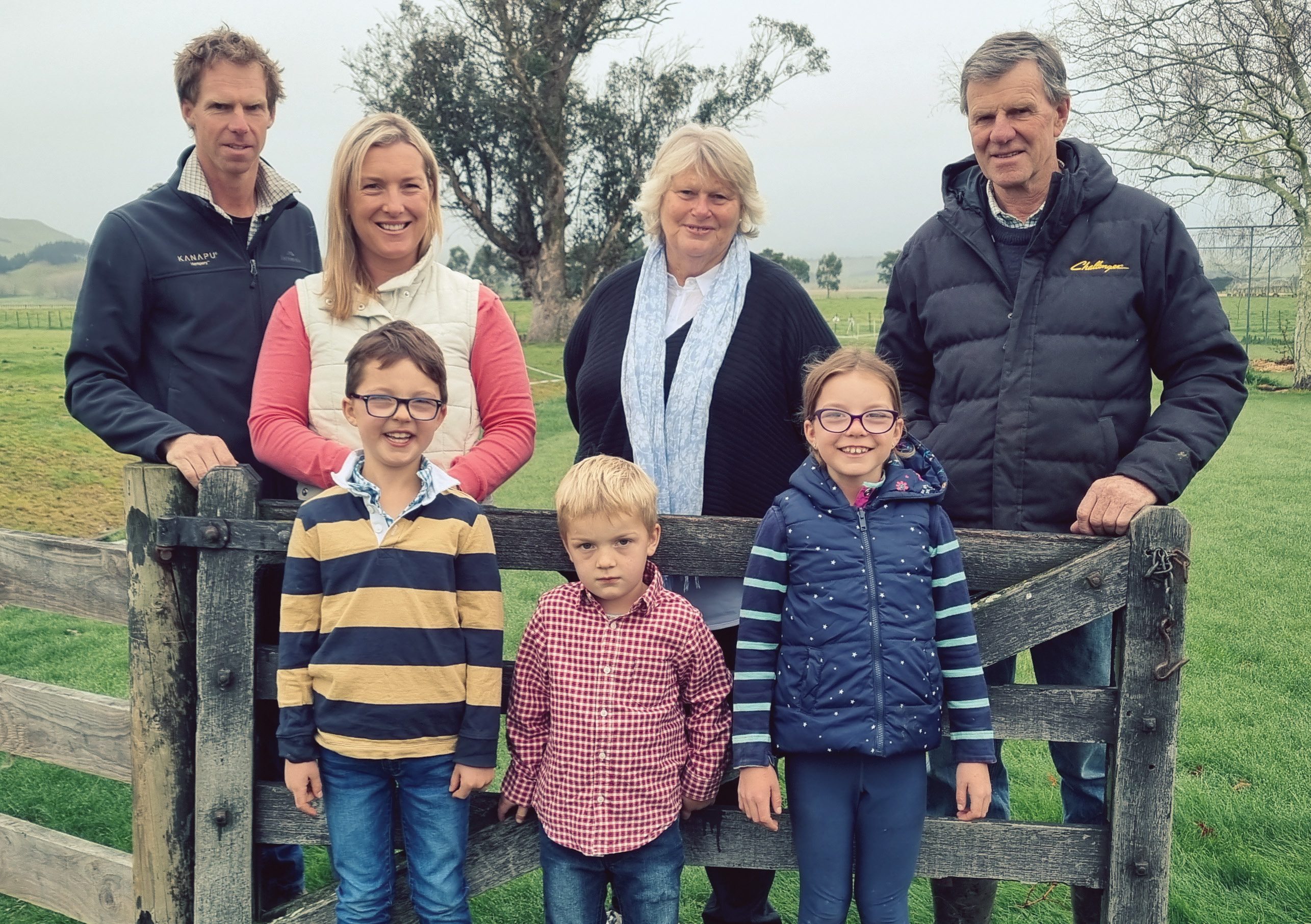 Running a profitable farming business and diversifying with off-farm investments is a Central Hawke’s Bay family’s key to succession.

Simon and Lou White and their three children – Millie, 8, George, 6, and Oscar, 4 – live near Otane, south of Hastings. Trading under the Ludlow Farms Trust, Simon and Lou lease the 665ha home farm from Waireka Family Trust, set up by Simon’s parents, Neil and Gwen.

Getting the right advice is a big part of a successful ownership transition.

“Dad and I had a plan and kept the rest of the family informed starting with a full family meeting, even though it was a bit of a moving target; our plan changed half a dozen times with developments and other blocks coming on the market. Our lawyer gave advice and helped write up things, including Mum and Dad’s Memorandum of Wishes, a copy of which everyone in the family has. We’ve kept them and our accountant and bank manager up to date; they all have good ideas from talking with other people and can bring new suggestions to the table.”

For Simon, the timing was good.

“I had a bit of money saved when I came home from overseas, so we set up the farming company (Ludlow Farms Ltd) straight away and I bought a percentage of shares.

“Ludlow Farms Ltd started leasing the land from Waireka Trust from here. Over the next 12 years we were profitable, so the money the farm made was invested back into the company, which bought me more shares.”

“The more shares we owned the quicker we got to our goal of owning Ludlow Farms Ltd out right. It took us eight years, 2018, for us to own it 100 per cent.”

“It was a good way to do it; it gives a young guy an opening and the further in he gets, the more vested he gets, and the more understanding he has about the business.”

The original 120ha Ludlow Farm was bought in 1960 by Simon’s grandparents, Eric and Tiny White, before being taken over by Neil and Gwen when Eric died unexpectedly. Simon says he appreciated his father’s willingness to allow him to also take responsibility early.

“After his dad died suddenly, he was chucked in the deep end; he came home and knew nothing about cropping farming.”

“He gave it a nudge, saw how it worked, and they’ve been great farmers, winning some accolades along the way.

“It was tough when he first started, with death duty tax and through the ‘80s with high interest rates, but he had the opportunity to do what he thought was best with no questions asked.”

“The farm used to have breeding ewes and big cattle and he transitioned it to cropping and was an early adopter of no tillage and other technology.”

“I’m grateful he gave me the same opportunity to find my way. When I first came back and wanted to change things, I had to prove it would work. He was the boss for the first 12 months and then the decision making was up to me, but I still had him there as a teacher and a mentor, especially with financial details. That was another strength, being able to bounce ideas off each other, two minds thinking together. Having a good relationship with your parents is vital with succession.”

Simon’s older brother Daniel worked on the home farm first but is now farming a similar property in Canterbury with his wife Tash (as part of her family’s succession plan).

Their sister Anna and her partner James manage Erewhon Station on the Napier- Taihape road.

“The main thing was for the farm to stay profitable to help other members of the family with any opportunities that arise, and to make a smooth ownership transition to the next generation,” Simon says.

Part of that profitability is two other income streams on the farm, beef and lamb; the farm buys winter trade lambs in autumn, which are sold by before cropping starts in October, and R1 and R2 Friesian bulls are finished as the market and season allows.

Four large dams also mean 400ha are under irrigation. The Whites have a range of speciality small seed crops, as well as wheat and barley, grow peas, sweetcorn and beans for McCain Foods, squash for the Japanese market, and hemp (on other properties as well) for Kanapu Hempery.

Lou wasn’t involved in the original succession discussions, as she arrived on the scene a few years after Simon went back to the farm.

She has her own succession happening in the background with brother Richard running her family farm in Wairarapa with parents, Mike and Roz.

“Lou and I have our own family trust, which is set up to benefit both of us and our children. So, if something ever happens to me, there’s still the potential for them to carry on if they want to in the future. At the end of the day, we are leasing the farm, but we’re paying down debt and paying interest on the mortgage on the farm, plus all the development we’ve done over the past 10 years.”

Simon and Lou also have two lease blocks, 180ha each, to help utilise the farm’s machinery and to generate cash by finishing cattle and lambs and cash cropping over the summer. The couple have also used off-farm business and property investments to diversify their portfolio and start the ball rolling on future succession and the transition of the next generation.

“I believe the earlier you start the conversation about succession and have a start plan in place, the greater the capacity to find a solution that caters for every family member’s best interest, while keeping healthy and happy family relations.”