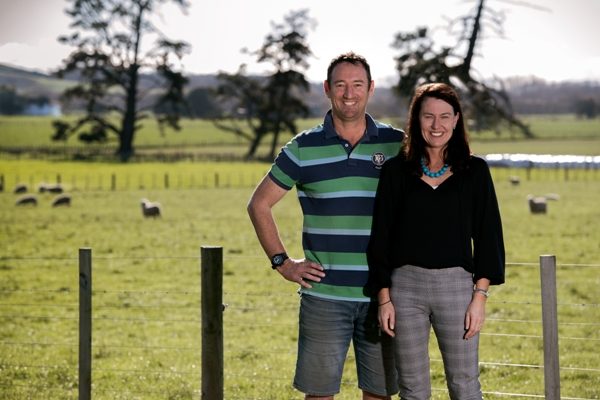 A central Wairarapa farming couple are doing all they can to maximise production on farm, but not at the cost of their natural resources. Cheyenne Nicholson reports.

Mick and Karen Williams have farmed in the Gladstone area since 1999 when they bought their first 64-hectare block. Over the years they have added to the farm three or four times – which runs as a 224ha arable and lamb finishing unit.

The couple were the supreme winners for the Wellington region 2013 Ballance Farm Environment Awards and were strongly praised for their willingness to try new things as well as keeping their natural environment top of mind. At the time, their cropping business was hugely varied, growing wheat, barley, ryegrass, peas, red clover, onion, mizuna lettuce, coriander, carrot and celery.

‘We are a bit different to South Island cropping farms that are autumn-sown and don’t tend to have a pasture phase. We are spring-sown so every year that paddock is going back either into a forage brassica or annual grass for the winter and getting grazed by livestock.’

Since then, the farm has been simplified with many crops cut out of the system. Now, their focus is on feed barley, malting barley, milling wheat, feed wheat, ryegrass for seed and red clover for seed. They also grow a selection of forage crops for lamb and cattle finishing.

“The crops we have are chosen for both the availability of contracts and what we are experienced with. A big part of it is also having crops that will help in our effort to look after our soil.”

Onion seed was dropped out from rotation. With planting in May compaction was a major issue as was the multiple interrow cultivations.

There is no fixed rotation for the crops, Mick likes to keep the system reasonably flexible in order to take advantage of where the markets are sitting and maximise on them.

“We are a bit different to South Island cropping farms that are autumn-sown and don’t tend to have a pasture phase. We are spring-sown so every year that paddock is going back either into a forage brassica or annual grass for the winter and getting grazed by livestock.”

This helps to break the disease cycle and allows the paddock to go straight back into a cereal crop after its pasture phase. The clean pasture means the worm burden is low, and therefore, animal heath intervention is low.

Although the flat land and great access to water for irrigation make growing crops easier, their location in the North Island is a challenge. The range of contracts is limited, with most seed companies located in Canterbury.

“There isn’t really the infrastructure up here for it either.”

The addition of a new 300-tonne silo brought up their total storage capacity to 600t, meaning they are now able to store about half of what they harvest, allowing them to hold on to stock and sell it when the prices are right.

Looking after soil is top priority for Mick and Karen. They are 100% no-till. This increases the amount of water that infiltrates into the soil, the soil’s retention of organic matter and its cycling of nutrients making the soil more resilient.

“With no cultivation after establishment we get a savings in labour, fuel, but for us it’s about looking after the soil. Cultivation damages the soil structures and biology.

“We spend a lot of time in spring with a spade going around checking soil conditions so we can get the timing just right.”

They are self-contained for everything other than baling so are able to run to their own schedule for sowing. Timing is critical for any crop but even more so for no-till cropping.

“Cultivation allows you to manipulate soil conditions for timings, but we don’t have that option.”

Because the farm has been added to over the years and new paddocks created there are variations in soil fertility. Grid testing is carried out before each crop is sown and specialty mixes of fertiliser for the crop type and soil needs putting on after sowing. Their effort in correcting soil fertility and ensuring the preservation of the soil’s biological health means their fertiliser use and costs don’t make a huge dent in their budget.

“We try and avoid just applying slug bait as a matter of course. We monitor and apply when necessary. The same for cereals and aphids, when they reach a threshold that we determine intervention is needed. That threshold will depend on the growth stage of the plant.”

Two hard hose gun irrigators delivering 43 litres/second is supplied by a category A bore delivery system which covers 160ha. In a dry year they might use up to 140mm/ha.

“We went with guns as we have limited water and it enables us to water different parts of the farm when required. With our established trees and wetlands we weren’t going to sacrifice those for pivots.”

For the past four years Mick has been yield mapping which has given him enough data to start doing prescription maps for target nitrogen (N) application for crops.

“This will help reduce our inputs and obviously has really a great environmental benefit as well.”

The data is collected via cells in the harvester.