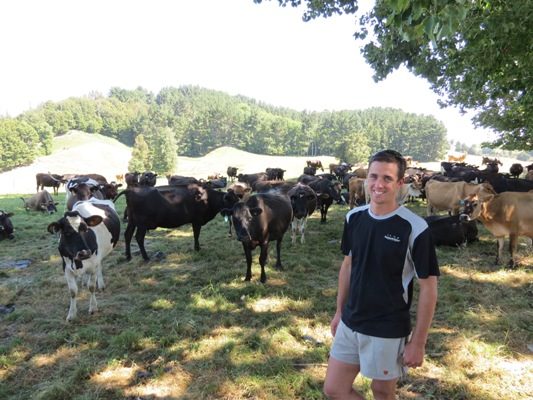 Piriaka Farms has a farm policy that keeps discipline around onfarm decisions and keeping focused on pasture and profitability. Robert Ferris talked to Sheryl Brown about sticking to the plan.

Pushing pasture first and keeping a positive margin on the cost of production is the enduring farm policy for Piriaka Farms.

General manager Robert Ferris says their focus has changed in the last five years to being profit-driven rather than production-driven.

They are focused on pasture, people and profit, and production is a by-product of getting that right, he says.

Robert spoke at the inaugural Pasture Summit in November last year on his journey to becoming more pasture and profit focused.

‘When I did get off my high horse and stop listening to the naysayers, what I found out was quite amazing. Not only were these farms financially very profitable, they were also some of the best-run farms in every other aspect of the business.’

“I enjoyed being surrounded by the best pasture farmers in NZ and some of the best industry experts, like John Roche, Mark Neal and numerous others.

“It gave me more confidence that we are on the right track. The message around pasture was the same all the way through the conference.”

When Robert used to hear about all-grass farmers he pre-judged them as having poor per cow production and thought all other aspects of their business must be suffering from the same fate.

“Through arrogance and ignorance, I had never really bothered to actually listen and find out for myself how these farmers were operating and what they were achieving.

“When I did get off my high horse and stop listening to the naysayers, what I found out was quite amazing. Not only were these farms financially very profitable, they were also some of the best-run farms in every other aspect of the business.”

Robert studied a Bachelor of Commerce and Administration at Victoria University, where he met his wife, Jessica.

He didn’t dream of heading back to the King Country to be a dairy farmer, but when he graduated the global financial crisis was in full force and jobs were scarce.

His parents discussed the opportunity to move home and expand the family farm if Robert and his brother Marc were willing to commit. It provided not only a job but a business investment which Robert was keen to pursue.

Since then the farm has expanded from 420ha to 1100ha, milking 2200 cows, with another 1000-cow dairy farm at Mamaku. Robert is the general manager of the dairy business, while Marc looks after the dry stock.

Both brothers have become equity partners in Piriaka Farms in the last two years, with Robert and Jessica aiming to increase shareholding year on year.

Three generations are now living on the farm with Nana, Dulcie Ferris, still being involved and always interested in what’s going on. Dulcie’s husband Graham Ferris died in 1998 the year the home farm was converted from sheep and beef to dairy.

When Robert first moved back to the farm, he learnt how to be a good grass farmer from the ground up. However, between droughts and chasing high payouts, the farm had started to slip into a high DairyNZ System 3.

They were at the crossroads between investing in meal feeders for the farm, or going back to a more simple pasture system, he says.

The catalyst for deciding to go back to a DairyNZ System 2 was when they reflected on their financial performance from the 2012/13 and 2013/14 seasons.

In 2012/13 the milk price was $5.84/kg MS, followed by a peak payout of $8.40/kg MS. Both seasons involved dry summers where they needed extra supplement, drying off in March the first year, compared to buying in a lot of palm kernel to milk through to make the most of the record payout.

Comparing the cost of production and the profit margin across those two years showed the reality of the margin made off buying in supplement, Robert says.

“We didn’t understand marginal milk at that stage, but we were able to work out the costs associated with that milk.

“At $8/kg MS we thought we can’t dry cows off so we fed 1.2 tonnes/cow of supplement that season. We were too worried about the $1 we may miss out on and not looking after the $2 we had already made.”

When they looked at the actual figures, however, their margin in the record payout year after buying in extra supplement was only 10%.

They worked out their true costs, from the price of the supplement, through to the extra labour of feeding out supplement, the wear and tear on machinery, depreciation, cost of diesel, and any other cost associated with that milk during that time.

They worked out the breakeven cost feeding that extra supplement was between $6.50/kg MS and $7/kg MS, which they just couldn’t afford in the majority of years when the average milk price was less than $6/kg MS.

“We just couldn’t see the margin in it, once the payout drops you have a negative margin. With the law of averages, you were going to lose money.”

Sticking to the plan

They sat down and wrote a farm policy which has helped them set goals and stick to their plan, rather than making reactionary onfarm decisions.

An example of sticking to the plan was putting all 2250 cows on once-a-day on December 20 this season, despite the grass growth at the time.

They put one herd on OAD last year before Christmas and they were only 6% and 11% behind the other two herds in that same period, Robert says.

That small drop in production was made up for by being able to have cows in better condition going into calving and being able to give staff more time off over summer.

“The difference wasn’t as much as we thought, and we don’t have to feed as much in winter to get cows in condition, the margin of TAD through that period appeared be to negative vs OAD.”

Their production goal is 1000kg MS/ha which they have been achieving for the last four years since they’ve stuck to a grass system.

All budgets and farm decisions are based on reaching that 1000kg MS/ha goal, Robert says.

Their longer-term target is to harvest 15t DM/ha so they are working on soil fertility to reach that figure.

They still feed out supplement during the winter if necessary, or in any serious events.

“Our farm policy is to only feed lactating cows where it will have a dramatic effect on the season, for example a drought in December, or in a feed shortage in October leading into mating.”

In normal feed pinches, they will exhaust every other option first, culling cows, going on OAD before drying off light and young cows, then eventually the rest of the herd.

The home dairy farm is split into three milking platforms with a farm manager on all three dairy blocks. One of the managers also acts as an operations manager role overlooking the three farms. Each block employs another two full-time staff and they employ relief milkers on the weekends.

Cutting back to a simpler system has given staff a better work/life balance and creates a good team culture, Robert says.

“Nobody enjoyed the extra work, feeding palm kernel out in trailers, – the guys were working really hard, and the more complicated you get the more risk of failure so you’re trying to be out doing more yourself.”

Their staff now enjoy working fewer hours during summer, to be able to spend time with their young families. Their staff work about 82 hours every fortnight in January and February and are home by 1pm or 5pm on a full day.

Staff work 11 days on and three days off roster throughout the year, with the aim to be finished by 8am or lunchtime at the latest on a Thursday so they can have a long weekend.

“It’s a simpler system, we don’t get as many phone calls, there is not as many complications onfarm.”

They have considered growing summer crops, which would have been perfect this year, but the last three years they haven’t needed them, Robert says.

“We just have to suck it up this year and stick to the plan.”

Crops along with feeding out palm kernel adds complication and are also more work for staff when they’re trying to pull their hours back.

A copy of the farm policy is kept in all the sheds – so the staff know what’s going on and know what’s coming up.

The mating plan, animal health plan and dates for round lengths are all part of the farm policy.

“The dates are set for the round speed, the plan might change by a day or a week, but everyone knows what’s coming.

“For example the balance date is September 20, and we are on a 25-day round. If we make silage it needs to be cut in November, any surplus from December or we slow the round and push that grass forward.”

Cutting cost out of the system

Fertiliser is their biggest farm working expense, spending between 60 and 70 cents/kg MS. In the downturn they didn’t drop their fertiliser spend, they just redistributed it into higher priority areas, Robert says.

“I enjoy the numbers side of things and I really enjoyed those low-payout years because it gave you an excuse to really look at everything and break everything down.

“We learnt a hell of a lot about what we actually need and what we don’t. If you save a cent/MS in each column, it adds up.”

Some of the costs they dropped out, they haven’t had to bring back into their system.

For example, they cut their dry cow therapy bill in half, by selecting at risk cows rather than blanket dry cow treatment. They also stopped using any intervention for mating.

Since dropping back to System 2 and dropping some of those costs in the last few years, their animal health has actually improved, Robert says.

They have also managed to drop their somatic cell count and mastitis cases.

They strictly monitor the cows and heifers leading up to calving for mastitis, and cull cows who have had more than two cases of mastitis.

“Low empty rates give us this luxury.”

They artificially inseminate the herd for 24-28 days, before running Jersey and Angus bulls for another nine weeks. They rear their own Jersey bulls and buy Angus bulls each year.

They tail paint the day before the AI technician turns up, so staff don’t get too fatigued during mating. Their nine-week in-calf empty rate was 11% this year and they’ve pulled the Mamaku herd down from an 18% empty rate to 7.5% within two years of owning the herd.

Their priority is to make sure the grass is there and the round length is right for mating, Robert says.

There are still improvements to be made onfarm, but putting pasture first is at the forefront of their future farm policy, Robert says.

Supplement: 150kg/cow palm kernel, 5% of the farm planted in swedes