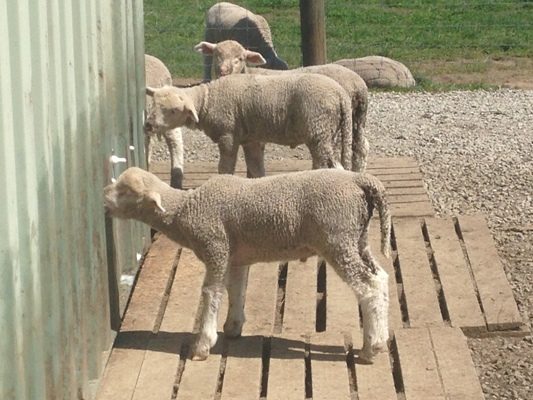 Snow can fall at any time of the year in the Canterbury high country and this extreme climate can make lambing challenging even with the best management.

Paul and Kerry Harmer farm Castleridge Station in the Ashburton gorge and were concerned about the economic loss associated with lamb wastage as well as the animal welfare implications.

Determined to address the issue, the couple have set up a lamb-rearing system – which includes automatic feeders – that minimises lamb losses and generates a profit of $50/head – including labour.

At a recent Beef + Lamb New Zealand Farming for Profit field day in Central Canterbury, Kerry outlined the system and the benefits it has generated to their business.

Ideally the lambs would be fully fed colostrum for three days, but it is not feasible in this system. Instead they have two days of colostrum, two to three-days of whole milk and are then put on to whey-based milk powder.

While they have no problem getting the ewes in lamb, Kerry says the ewes tended to be more focused on looking after themselves in adverse weather and will often leave one lamb behind.

Unusually for high country farmers, Kerry and Paul actively shepherd their lambing ewes, so are well positioned to gather-up orphaned lambs. They used to hand-rear them, but seven years ago invested in an automatic lamb feeder and have not looked back.

“It has been the best thing for the lambs and for us.”

They now have three automatic feeders, two de Laval and one Lely.

The feeder is a simple system, with milk powder going in the hopper at the top. It mixes the powder and water and an element keeps one litre of milk warm.

One feeder will feed 260 lambs and the Harmers have two feeders in the shed and one outside. Last year, 860 lambs went through the shed.

Kerry explained that they do mother-on ewes that have lost lambs and around 300 lambs were mothered on to ewes, although some did spend time on the feeder before being mothered on. A total of 750 were weaned off the feeders, although the costs of the system were calculated on 860 lambs.

Last year, when the lambs came into the shed, their navels were sprayed and they were put under a heat lamp. This year they will spray the navels in the paddock to prevent contamination during transport.

If lambs are weak, they are given a warm glucose solution, otherwise they are given warm colostrum. Ideally the lambs would be fully fed colostrum for three days, but it is not feasible in this system. Instead they have two days of colostrum, two to three-days of whole milk and are then put on to whey-based milk powder.

Because they haven’t had sufficient colostrum, the lambs are given a 10-in-one vaccine and are treated for scabby mouth.

Straw is used in the lamb boxes, which is where the lambs go when they first go into the shed, otherwise they are on a bed of woodchips.

As the lambs get older, they progress along the pens. The lambs have ab-lib access to the milk feeder so they can get as many feeds as they want per day – this means they don’t gorge. They also have access to pea-vine hay and starter mix (meal) from the outset.

Kerry says as the lambs get bigger, they gradually drop the temperature of the milk and from four to five days of age these lambs are given outdoor access and the lambs choose to go outside.

Kerry and Paul have built a lamb shelter but the lambs have constant access to milk and feed which Kerry believes is key to their survival outside. They have installed their third automatic feeder in a shipping container so the lambs are drinking from a metal wall.