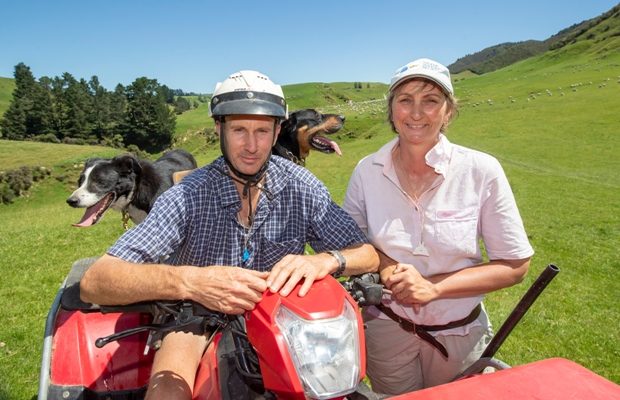 Puketitiri sheep and beef farmers Simon and Melissa Turner are optimistic about the future of wool, and continue to include it as an important selection criteria for their elite breeding flock of Romney ewes. They were recognised with the 2017-18 Wools of New Zealand Grower of the Year award. Rebecca Harper visited them.

Selecting classes of stock that suit the environment and feed demand on their Puketitiri farm, Glenhope, is an important consideration for Simon and Melissa Turner.

Simon grew up next door on the family farm, where his father and uncle farmed in partnership. Glenhope was bought as an additional block in 1986 and Simon and Melissa bought the farm from the family in 2016. The property includes 222 hectares of the original farm, owned by Simon’s great grandfather since 1919.

Their aim is to breed the best stock they can for their environment, with a strong focus on quality and utilising the best genetics possible.

“We try to choose policies that fit our environment and our grass curve, and also policies that allow flexibility as we have pretty long, cold winters up here, but generally good summers,” Simon says.

‘We would rather take a hit head on and not have it impact on production the following year.’

The free-draining Taupo ash-like soils mean they need a good spread of rainfall.

“It drains away so quickly, so the spread of rain is more important than the total. We can go dry very quickly in summer, so we need policies to maintain production, even when the season goes against us.”

Simon says the farm is well stocked for their area, about 10.5 stock units/ha, which means it’s vital to have policies and classes of stock that are flexible and allow them to offload if needed. Sheep are number one, with a sheep to cattle ratio of 75:25%. 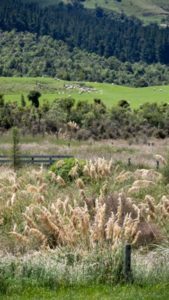 “There’s normally not much growth here from May to September so we’re breeding stock to suit that.”

Their late lambing date of September 8, and late calving – October 1 for heifers and October 15 for cows – is designed to suit the grass curve.

“The cows winter easier and can keep the grass trimmed up for the sheep when the grass goes mad if we get a wet summer.

“The biggest thing is matching policies to suit our farm and environment, rather than getting caught up in what other people are doing. Everyone has good ideas, but you have to be careful about what will actually work for you and what you’re trying to achieve.”

Taking a big-picture view means there is always a class of stock, at any given time of the year, which is not top priority.

“You can’t feed everything well all the time. We want to protect core production and prefer to have triggers – if it gets to a certain date and it hasn’t rained, things have to happen. It’s about being proactive, but not panicking.

“You don’t want to end up in a corner with everyone else. We would rather take a hit head on and not have it impact on production the following year. It’s about how comfortable and confident you are in your decision making, and how close to the wind you’re willing to sail.”

Simon likes to plan ahead so, in an adverse season, teeing up grazing or finding a good private buyer for store lambs are things he organises in advance – in case they’re needed.

Looking after on-going production and protecting capital stock are the most important considerations.

“Our capital stock, we’re breeding them to be able to handle it tough at certain times of the year. Our ewes work pretty hard when they do work, but we feed them well at critical times.” 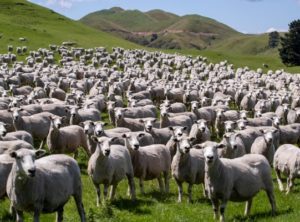 Sheep in the blood

Breeding sheep is in Simon’s blood and, while not a registered stud, the Turners have a recorded elite flock of Romney ewes.

“We had a bigger recorded flock when dad was here and we kept the best of those elite ewes to carry on breeding our own rams. We used to sell a lot of rams, now we sell about 200 a year.”

Simon buys in a sire ram as needed, for an out-cross and to introduce new genetics.

The top 15% of ewes make the elite flock, 75% comprise the commercial flock and the bottom 10% are mated to a terminal sire.

“They’re the ones we don’t want to keep replacements from, and give us a class of lamb that can go in the first draft.”

The Turners are lambing at 165% (lambs docked to ewes mated). Now, it’s about maintaining fertility rather than trying to increase the lambing percentage.

They don’t keep any single ewe lambs or ram lambs – but only about 6% are born as a single. Most surplus ewe lambs are bought by farmers as replacements. “We know they are only purchasing lambs that were multiples, which gives them confidence.”

They are fussy about what makes the elite flock cut and only older, proven ewes are admitted.

“They have to have had multiples every year for at least two years, be a good type and have good wool and conformation. We have a no-drench policy for elite ewes. They have to be top performers and that’s what we are focusing on breeding rams from.

“We’re big on structure, both sheep and cattle, it starts from the ground up, good feet and legs. If you don’t have an animal that can handle your environment, you’ve got nothing.”

All lambs born to elite ewes are EID-tagged at birth and they are big on mothering ability, which is noted.

All surplus male lambs are finished, targeting a minimum of 18.5kg carcaseweight with an average of more than 20kg, and killed through Atkins Ranch. For 2017-18 the average was 20.8kg CW.

There is no hogget mating at Glenhope, another element of their flexibility policy.

“They can be tightened up through lambing, or go off grazing, which means we can feed the ewes well. We’re trying to keep things simple and effective. We have a steep hill block that suits dry hoggets – they’re up there out of the way, but still ticking along through lambing.” 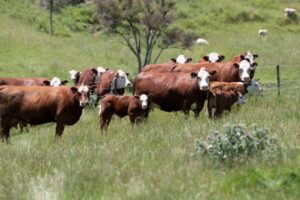 Herefords the cattle of choice

The Turners love their Hereford cattle, though their main job is to maintain pasture quality for the sheep, who are number one.

“We’ve had Herefords back here, over crossbred cows, for about 15 years and we love the breed.”

Bulls are sourced from the Chesterman family at Koanui Polled Herefords in Hawke’s Bay and the McKenzie family at Maungahina in the Wairarapa.

“We feed our cattle pretty well. Cows and calves will follow lambs and steers, then ewes follow behind them, right through the summer, rotating.”

In winter, once cows have been weaned, they get put to work. “We feed them pretty well with calves on, and later calving helps with that.

“We eat grass as it grows through summer, maintaining quality rather than cleaning up roughage.”

The calving percentage at Glenhope is 96%, and they aim to finish all steers by 18 months old to a minimum of 300kg CW. The average for 2017-18 was 325kg CW. Any surplus heifers are also finished.

Winter crops of swedes and kale are generally used for hoggets and young heifers. Steers are finished solely on grass.

“From weaning onwards the plantain and clover gets used as a summer crop for finishing our next lot of works lambs, they go on the crop about three weeks before they go on the truck.”

The Turners remain committed to wool, despite its bleak state, and have been shareholders in Wools of New Zealand (WNZ) since its inception in 2013.

“We like the WNZ concept and vision of trying to get a good direct line from the grower to the end user, cutting out clipping the ticket in the middle. It’s all about the relationship between grower and end user.

“There are good people in there (WNZ), they have their heart in it and are passionate about it – it’s not just a job.”

Until recently, shareholders in WNZ have been required to put their money where their mouth is, contributing to the Wool Market Development Commitment (WMDC) out of their clip every year. The plan was always that the WMDC would cease in July 2018, when the business reached a point it could be self-supporting and profitable, which is what happened. A 100% commitment to the WMDC was one of the criteria for winning the Grower of the Year.

Simon freely admits wool has “never been worse, to be honest”, yet remains confident and optimistic it has a future.

“It is disappointing where wool is at currently, but all these products go in cycles.”

Melissa says they believe in the product, and Simon has always been committed to producing good wool.

“It’s such a great product, sustainable and good for the environment. If you’re doing it, you might as well be putting your best into it, and Simon likes to put his best in.”

Over the years, a lot of work has gone into selecting ewes for wool, as well as fertility, and they feel it is important to continue that. It also means they will be in a strong position, if and when wool comes back up again.

“We have always culled on wool faults and we would rather maintain the wool quality, rather than let it slip and have to fix it later if faults creep into the gene pool,” Simon explains.

Even with the increased cost of shearing, their high quality and quantity of wool means they still get good money for their wool – and it costs the same to cut if off no matter what the quantity and quality, he says.

They have taken advantage of WNZ contracts for lamb’s wool and second shear, as well as using the tender process, which Simon says has worked well.

They supply 100% of their wool to WNZ and use the STAPLE programme, which is the commitment programme growers use to advise their best estimate of annual production, and when it will be available.

Lambs are shorn in mid-January, hoggets in October, two-tooths in March and ewes are done in mid-December, post weaning. Wool production for 2017-18 was 36,573kg, with an average clip of 7.5kg/sheep SU wintered.

“We have good selection pressure, so we’re not sacrificing other traits to keep the wool quality, because we’re selecting replacements from a large pool.

“Fertility gives you power for selection. Genetics is a long-term game and we’re in it for the long haul. We’re not relying on hybrid vigour, we’re relying on locked-in core genetics to give us grunt year in, year out.”

The Grower of the Year award, which is chosen by WNZ rather than entered by the grower, was somewhat of a surprise to the Turners, who say they usually prefer to fly under the radar.

“I was very proud, and proud of Simon. It’s good to be recognised for your work and commitment,” Melissa says.

Simon genuinely likes wool and says he’s always had a bit of a ‘thing’ for it – it was probably inevitable really.

“I grew up watching my mum and grandmother both card and spin wool, and knit jerseys for us. My grandmother used to get us to collect the lichen off the fence posts to dye the wool a green blue colour.

“I used to tag along with dad buying rams and he would always be looking at wool as part of his selection criteria. When I went to Lincoln University I did a wool paper too.”

After university Simon spent several influential years working in the Wairarapa, including for respected Romney breeders, Holmes and Mike Warren, at Turanganui.

“Most guys who buy rams off us still care about good wool, and they care for the same reasons as us.”

Predominantly medium hill country, with some steep and some flat