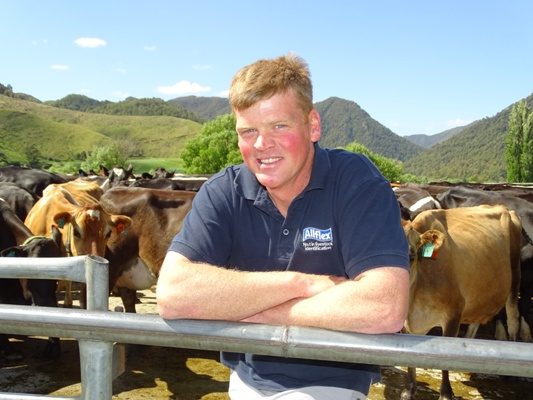 A cow chewing her cud has long been an indicator of cow health. Anne Hardie reports how monitoring collars can help show how a cow’s ruminations are affected by the state of their health.

Information from cow monitoring collars shows Adam McManaway and Kirsten Daymond the changes in ruminations and activity of every cow in their 465-cow herd so they know the state of their health long before an issue is picked up by eye.

Whether it’s calving, cycling, lameness, mastitis or anything that interrupts their usual grazing pattern, it will affect rumination and activity which is revealed on the computer graphs, or in acute situations prompt a notification from the phone app.

The couple are 50:50 sharemilkers 15 minutes north of Murchison in the Top of the South and were a demonstration farm for the Allflex Livestock Intelligence collars for the first couple of years. It was a convincing experiment for them and when it finished a year ago, they invested in collars for the entire herd which was a big financial commitment for a couple who had just taken on their first sharemilking contract.

Information from the collars tells them the optimum time to inseminate each cow which means more chance of getting her in calf earlier. If a cow has a stone in her foot, it will affect her ruminations and activity which will prompt the programme to draft her off before she is obviously lame and the problem can be remedied before it worsens. And it will reveal how much each cow is producing in comparison with how much she is ruminating.

It all revolves around the time spent ruminating which is an indicator of cow wellbeing and health. It’s the process which has the cow regurgitating previously eaten food and masticates it a second time – chewing their cud. A cow will typically ruminate eight to nine hours a day and a drop in the amount of time she ruminates indicates something is happening. A big change means it’s something quite crucial which is why a cow chewing her cud has long been an indicator of cow health. It’s a lot clearer on a graph though which shows just how much those ruminations are changing and when.

An increasing number of herds in the country are now using collars or similar technology to gather information and Adam and Kirsten say it is the way of the future for dairy farming. Their system has recently been upgraded with improved algorithms and they will have the ability to upgrade.

The couple have farmed as far south as Whataroa in South Westland and north to the plains around Lake Wairarapa before arriving at Murchison for a manager’s job initially on Dave and Jane Field’s farm who had moved to Tasmania for a larger dairying enterprise. Dave and Jane gave them the opportunity to start buying cows and leasing them back, which enabled them to build up enough equity to take on the 50:50 sharemilking job last year. Adam says they have been lucky to have supportive farm owners who helped them into their 50:50 sharemilking contract and allowed them to be a demonstration farm for the collars.

At Murchison, they farm both sides of the highway where up to 7,000 cars pass through each day in the middle of summer and an underpass connects the farming operation. On 135 effective hectares they milk 465 crossbred cows with a target this season of 215,000kg milksolids (MS) and 475kg MS/cow. Their top production so far has been 214,000kg MS and they aim to stay within the top 10% for milk production in the Tasman region.

Cows are milked twice a day through to March, when they drop to three-in-two milkings and then once-a-day for the last month to dry off – all depending on the season and supplements. They operate a system three on the DairyNZ production system, with 300 tonnes of palm kernel – PK20 which has molasses as well – added to the 500 bales of balage made on the 75ha support block they lease nearby. It grazes the young stock and winters the cows as well. On the milking platform, K-line irrigation waters 120ha from the Buller River which borders one side of the long, narrow farm.

The collars will read up to 800 metres from the shed and sometimes stretch out to a kilometre, but even when they are out of range, they still collect information and that is downloaded when they get within range on their way to the dairy for milking.

“As long as the drafting gate gets that information while they’re being milked it will draft them in the different directions they need to go,” Adam explains. “At the moment, (beginning November) we draft cows on heat one way and cows with health issues the other way. It will detect all those problems itself and it will draft on its own. So in the morning I’ll go down to the cow shed after they’re milked and the cows in the left pen will be on heat and the cows in the right pen will either have mastitis or lameness. And no-one will have drafted any cows. It will have just done it itself. It’s quite impressive.”

An antenna on the roof of the house enables internet to be sent down to an antenna on the workshop roof beside the dairy, with a few wifi boosters around to get as much coverage as possible. A barcode on the collar is in the system and her information is downloaded when she is within range into their Heatime Pro system, and if needed, automatically drafted into a separate mob.

Looking at a cow’s graph, it shows a substantial change in ruminations and activity at calving, then the effect of recovering from calving in the colostrum herd, the change to the main herd, the first cycle and then the second cycle in time to capture the optimum time to inseminate her.

“If we’d relied on tail paint to inseminate her, we may have missed the crucial time, wasted $28 on insemination and she wouldn’t be in calf. When a cow is on heat, she will have 90% more activity on the day she is cycling than any other day of the month and her rumination drops 30%. It’s just about identical with every single cow. So she will ruminate significantly less and walk significantly more around the paddock.