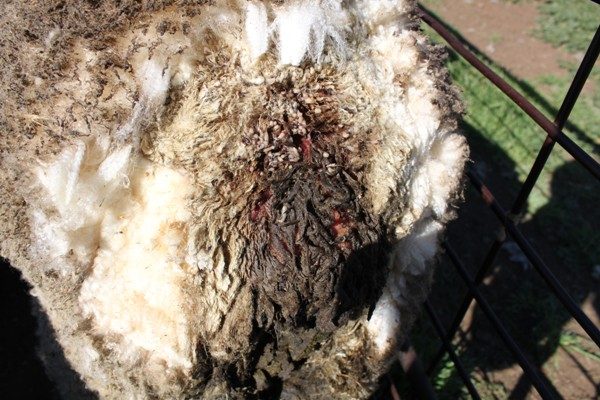 When it comes to flystrike, prevention is better than cure, and there are some practical steps farmers can take to guard against it.

In what could be shaping up as a bad year for flies, farmers should be particularly vigilant in a warm, humid summer, when soil temperatures reach above 12C.

Maintaining regular shearing and crutching, and keeping a close eye on stock are important general practices.

Vet Services Wairarapa veterinarian, Sara Sutherland, says the timing of shearing is an important consideration, as UV rays will destroy eggs and larvae, followed by a preventative fly treatment applied four to six weeks after shearing.

“It’s also about being aware of the weather conditions that bring flystrike on, particularly when it’s warm and humid.”

Sutherland says flystrike is not only an animal welfare issue when stock are affected, but also impacts on fertility.

‘If you do get hit, say the sheep are due for shearing but the contractor has been delayed because of wet weather, try to move them somewhere windy and dry.’

“They can become infertile, which has a financial impact. If they get flystrike in December, they can still be infertile coming mating time.

“If you do get hit, say the sheep are due for shearing but the contractor has been delayed because of wet weather, try to move them somewhere windy and dry. If they’re not due for shearing, get a treatment on them. There are different options for short or long-term withholding, so talk to the person you buy your chemical from.”

Sutherland says there have been some cases of resistance to chemicals used to treat fly in New Zealand and, if you suspect you might have resistance to a product, have it investigated immediately.

“Most of the time when a fly treatment doesn’t work, it’s more to do with application than resistance, though.”

Another thing to be aware of is any issues causing skin damage, such as rain scald, foot rot or facial eczema, which can then lead to flystrike.

“Preventing those issues will help and, obviously, removing dags.”

While she has no personal experience with fly traps, Sutherland’s impression is that they are better for telling when flies are around, than for controlling them.

Veterinarian Abi Chase has a PhD in parasitology and works as the technical product manager for animal health company Boehringer Ingelheim. She agrees prevention is key.

Chase says there are two chemical treatment options for farmers, the first being the use of an Insect Growth Regulator (IGR). An IGR won’t kill the fly or stop it laying eggs, but acts by stopping the larval stage developing into maggots.

Typically, the IGR is applied by running animals through an automatic jetting race. “The big thing with these is to make sure you put enough product on and don’t run them through too quickly.”

The biggest issue with lack of efficacy when it comes to flystrike treatment is incorrect application, she says, particularly putting too little product on, so make sure you follow manufacturer’s instructions.

“The product works by sticking to wool, so if you go too soon after shearing that can be an issue. Normally the recommendation is that the product will work ‘up to’ a certain number of weeks. If it is a high fly challenge year, the treatment may last for a shorter time and you’ll need to treat more often.”

Heavy rain immediately after application without sheep having time to dry properly can also affect the efficacy of a product.

The second treatment option for farmers is something that kills maggots, a nerve poison, usually used in conjunction with an IGR. Nerve poisons will usually kill lice as well.

Chase says Cyromazine and Dicyclanil are the two IGRs that have successfully been used in NZ for more than 30 years, with little recorded resistance.

“There are some reports in Australia and New Zealand of resistance to Dicyclanil and, although it’s not causing any issues at the moment, we know it will happen eventually, so using a nerve poison as well gives extra insurance.”

If you do get flystrike, a nerve poison will act quickly and Chase says Ivermectin is the most effective and fastest-acting product available to treat fly.

“If you do get fly, first speak to your vet and determine an appropriate treatment to knock down maggots quickly. Something with Ivermectin in it is a good choice. Shearing them to get rid of the wool and clean it up is also good.”

vamtam-theme-circle-post
 Category Country-Wide
Being the husband of a farmer’s wife has taught Paul Burt some valuable lessons. Thankfully,...
Read More

Tulips from BalfourTesting the two-legged animal in the top paddock