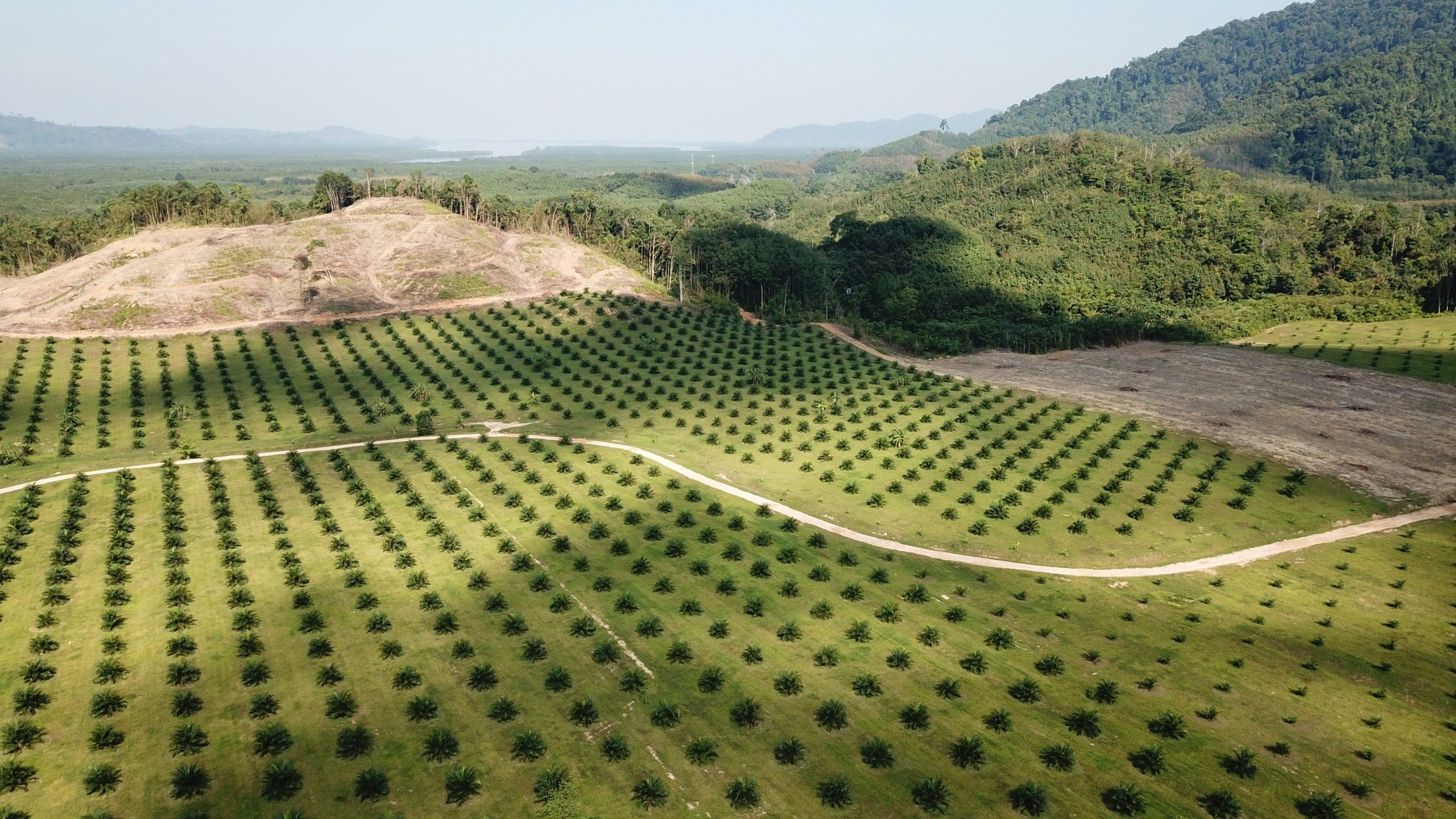 New Zealand farmers are the world’s biggest users of palm kernel, a by-product of the plant oil industry, but the fact that much of it is grown on land clear-felled by illegal logging brings it into focus of international trade laws. By Delwyn Dickey.

The dairy industry has been in the firing line from environmental groups for years over imports of palm kernel, but governments globally are also becoming more averse to deforestation as alarm over climate change increases.

Large swathes of ancient forest, from the Amazon to Indonesia, are cleared each year usually for logs, farming and plantations. Much of this clearing is illegal. Along with the concerns around loss of habitat for wildlife are the removal or burning of trees which are carbon stores, and damage to soil, especially peat, which then releases both carbon and methane into the atmosphere.

Calls to halt deforestation are getting louder, as seen at the recent COP26 – United Nations Climate Change Conference held in Glasgow last year where 140 countries, including New Zealand, promised to end and reverse deforestation by 2030.

Another 28 countries in this group, including the US and UK, also committed to remove deforestation from the global supply chain of some foods and other agricultural products such as palm oil, soya and cocoa.

Commitments made at COP26 are not legally binding – but homeland legislation is.

Although it had been in the pipeline for two years, during COP26 the UK passed an environmental law that will levy fines against large companies found to have trafficked in commodities tied to illegal deforestation.

The US looks to be bringing in legislation that would prohibit agricultural products like cattle, palm oil, soybeans, rubber, pulp and cocoa from coming into the country – if their production had contributed to illegal deforestation.

While also centred on restricting products linked to deforestation from entering the EU, they are proposing it covers both legal and illegal deforestation.

The legislation takes note of the products and areas where there has been the most concern around deforestation including palm oil and Indonesia. Rather than relying on certification to say the palm oil production was sustainable, the law would require all companies selling products like beef (including leather), soy, palm oil, timber, coffee and cocoa in the EU market to conduct “due diligence” to prove they are legal and have not caused deforestation or forest degradation.

In 2019, the total size of oil palm plantations in Indonesia for instance was about 14.6 million hectares. Of this only 2.12ha was certified sustainable, according to open source data analysis from Statistica.

New Zealand is the world’s biggest palm kernel importer until recently bringing in over two million tonnes each year, followed by the EU on 1,575,000t. About two thirds comes from Indonesia and a third from Malaysia.

Could this all turn to custard for dairy using palm kernel in the future, if foreign restrictions continue to tighten up?

Phil Houlding, Ministry for Primary Industries’ director of international policy downplays concerns over any increasing aversion to deforestation having possible impacts to imports of palm kernel, or this country’s use of it as a potential problem for our export markets in the future.

Rather than a product, palm kernel is a by-product of a crop grown oversees, he says.

“It is estimated that PKE comprises approximately one per cent of the palm plantation revenue.

“Imports of palm kernel expeller are already falling. PKE imports peaked in 2018 and have fallen 17% by volume since then. In the year ended June 2021, import volumes were nearly 1.8 million tonnes.”

If some of the shine is already coming off palm kernel, what advice or research is out there for farmers thinking of moving away from it or wary of putting all their supplementary feeding “eggs” in one basket.

For his part Houlding doesn’t think it’s likely the country would be able to move away from some form of imported supplement, with palm kernel a good option providing a high fibre and energy supplement for ruminant animals, such as dairy cows.

“It helps farmers mitigate animal welfare risks, providing a feed buffer against drought, floods and other climatic events. Often when drought affects large swathes of the country – like we saw in early 2020 – all home-grown feed can be affected.”

But the heavy reliance on supplements including palm kernel every year, during the hot dry months as pasture struggles is already concerning some farmers.

Those concerns will likely be reinforced by palm kernel prices sitting at about $400/tonne. Covid-19 is causing staff shortages on the plantations and freight prices have tripled during the last 12 months. Suppliers don’t see this price easing in the short term, and an end to Covid-19 is nowhere in sight.

Northern farmers are not the only ones worried about being locked into a system that will likely see them buying more and more supplementary feed as the north gets not only warmer and drier, but the dry spells last longer, with droughts more common.

The need to start building resilience into farming operations to cope with increased extreme weather events in the future, particularly drought, was behind a recent call-to-arms for adaptation in primary industries from the directors of several groups in the government funded National Science Challenges.

Set up in 2013 this group looks at tackling various science-based issues and opportunities in New Zealand’s business landscape.

“People who farm will have less flexibility and more constraints in a future of intense and frequent drought, making long-term planning increasingly challenging. This could trap people who farm in a crisis-response cycle where decisions are made ‘just in time’, creating vulnerability in farming systems.”

But funding can be short on the ground when it comes to innovation and changing systems as Northland dairy farmer Graeme Edwards found out in his recent foray into using banana plants for summer forage and for dairy effluent uptake. The exercise has left him disillusioned. (See Going bananas).

The team that took on Graeme’s mini-plantation was able to tap into funding from Our Land and Water – part of the National Science Challenges (above) – who fund about 15 various projects around the country each year, through the Rural Professional Fund.

While some projects are ‘shovel ready’ and give results that can quickly bring about positive changes in management, for others the amount of funding only stretches far enough to see if an idea has enough merit to be worthy of further research – as in Graeme’s case.

Our Land and Water also funded projects last year featured in this issue of Dairy Exporter on bore water, barriers to diversification, and trees in dairying.

They have two funded projects on the go at the moment, that deal with reducing or ending supplementary feeding.

The other is a largely desktop data analysis looking at moving to zero-supplement dairy systems in the event the dairy industry stopped using imported supplements.

Current drivers for dairy farmers continuing to import supplement, considerations they account for when purchasing, and how farm operations would change if imported supplements ended would be looked at. The payout needed to make these alternatives economically viable is also part of the package, along with looking at other possible alternative feed sources like food waste.

Still in its early stages Sean Nixon from Agri-Concepts has taken the project under his wing until the final team is confirmed.

Concerns over reliance on imported feed and its increase to farm working expenses was behind a three-year trial run by the Northland Dairy Development Trust in conjunction with the Northland Agricultural Research Farm at Dargaville, ending in 2018.

The trials compared two farms using all home-grown feed (grass only and cropping) with one using imported palm kernel supplement.

They showed grass-only farming profitability, when associated costs with supplementary feeding and cropping were taken into consideration, was similar or better than the palm kernel option on normal weather years. But clay-based soils on the farms during a wet late winter/spring saw the palm kernel farm a clear winner that year, with cropping on clay discounted for the future.

Another three-year trial followed (See our ??? issue) looking at production and profitability between farms on grass-fed only, palm kernel, and palm kernel plus other supplements. The worst drought in 100 years fell in the middle of it.

Moving away from palm kernel

For some farmers the palm kernel supplement debate is moot as they don’t use it anyway, like state-owned farm Pamu.

“We used to use a lot of PKE but that’s been phased out for four or five years now,” says Matt Johnson, head of farming for Pamu’s dairy operations, with an accompanying reduction in stocking rates.

Their systems sit in the 2-3 production systems range with DairyNZ, he advises, instead of at level 5 where some were.

This sees grass and maize silage brought in when needed along with small amounts of concentrate like distillers dried grains (DDG), and on the West Coast and Canterbury farms they use barley grain grown in the Canterbury region, although it’s not a big part of their operations, he says.

As far as profitability goes Pamu benchmarks its performance each year across finance, animal, people and environment against DairyNZ, and Baker Ag and their BFM groups – “and we’re comparable”, Matt says.

Other farming groups that steer clear of palm kernel are organic and regenerative farmers.