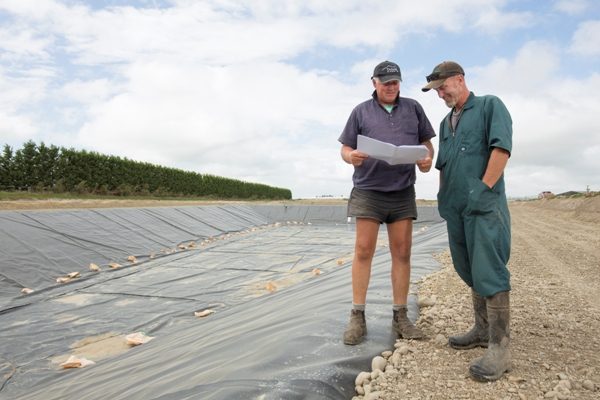 Twenty years after its conversion Canlac Holdings is still a model for what can be achieved on an irrigated Canterbury dairy farm in terms of profit, business growth and progression.

It’s one of the country’s longest-running and most-successful equity partnerships with enduring relationships and innovative business structures creating platforms for individuals and the enterprise as a whole to grow and achieve lifelong goals.

The farm’s one of a number of properties that has been owned by an original group – Jim and Sue van der Poel, Peter and Marg Ormsby, Mike and Andrea O’Connor, Soren and Choo Ying Moller –  who initially made a foray into Canterbury to convert dryland into high-producing irrigated dairy land.

More recently Tony Coltman and Dana Carver have become equity managers on Canlac through an innovative equity sharemilking structure and are pushing the farm’s performance even further.

At the beginning Jim says they looked at what was working and what wasn’t in other equity partnerships and set out to avoid others’ pitfalls.

“We saw failures where people weren’t aligned, where they didn’t have the same values or philosophy in business or farming.

“We also saw failures when they’d gone in undercapitalised. Somewhere down the line they’d needed more capital and often they weren’t all in an equal position to respond to that.

“If that happens and people aren’t aligned – well it drives a wedge and creates tension.”

‘Even if you only have a small percentage – you’ve got to start somewhere. You need to have a vision for the business and know you can add value to it using your ability.’

Having a clear exit strategy and shareholder agreements was important too.

“Like all contracts though, if they’re well written and you’ve gone into the partnership with good people and you’re all aligned you can put the contract or agreement in the drawer and never have to refer to it.

“When you know the personalities – then and now – you know we’re all strong-minded people but because we were aligned we were able to have good, robust discussion and make decisions collectively.

“It never came down to a vote.”

Both Quintag and Canlac were converted and set up with the money spent on good pastures, lanes, irrigation and farm dairy so the properties could perform from day one.

“So right from the outset the farms were cashflowing themselves and giving us a return so we were paying off principal and paying dividends out of that cashflow.

“That meant the business and the people involved were strengthening their position and we were quite quickly in a position to go again and do the next one.

“With the benefit of hindsight, we had a rising value in the asset, but we didn’t factor that in.

“I’ve never bought a cheap farm yet – I’ve always paid full value because on the day that’s the value of the farm. You don’t know whether next year that value’s going to be higher or lower with certainty.

Richard and Chrissie Wright had been sharemilking in Te Awamutu before they took up the equity manager’s job at Quintag.

“In those days the level of scale – 1400 cows – was quite new. The chance to get into the partnership gave us a huge level of excitement and the ability to get into farming at a scale that we never would have been able to otherwise.

“There were a lot of eyes on us and we knew we had to make it work.

“We became much better business managers through that experience and being involved with our partners,” Richard says.

From their investment and role in Quintag they continued to grow and were ultimately able to achieve their personal goal of owning their own operation themselves.

They also own the Slip Inn Café at Havelock, the gateway to Pelorous Sound and supply beef to the restaurant there. They’ve diversified into cider with the café selling its own brand which is due to go nationwide this year.

Richard says they’re big fans of the equity partnership structure as a vehicle to create more leverage than possible individually.

They’ve come full circle really and are in the process of bringing their manager on as a sharemilker in partnership with them and they’re looking to create a similar type of structure with their café manager.

For Russell and Leanne the move to equity manager from sharemilking back in 1998 meant greater security.

They’d been sharemilking 500 cows for the van der Poels, but Russell could see the next steps in the sharemilking game meant several moves.

“I just wasn’t comfortable any more moving the kids around. Every three years you had to think about finding a job and a new home. The equity partnership option gave us security and a chance to have a land asset.

“We knew we could work with the people involved and the farms and the systems were set up to make money.

“You see these partnerships that don’t succeed and often it’s the tensions that come from not being profitable. People lose interest pretty quickly if they’re not making money,” Russell says.

Over time partnerships change and evolve as people’s needs and life stages change and Russell says people going into an equity partnership need to be very clear about what their own goals are.

“They need to make sure the structures and the plans for the partnership are going to meet those goals. They do have to think about the fact the partnership could have a finite life.”

He also urged people going in as equity managers to leverage off their skills as a good farm operator.

“Even if you only have a small percentage – you’ve got to start somewhere. You need to have a vision for the business and know you can add value to it using your ability. Then you need to make sure you can capture that value through the structure you set up.

“Leverage off your farming ability – these big farms and their owners need top operators to make them perform and run efficiently.”

The structures needed to make provision for growing the pie or ensuring the equity manager could grow their slice of it – preferably both, he says.

Russell and Leanne are now the major shareholders in Canlac. They stepped away from the day-to-day management role and more recently took up a whole new lifestyle challenge running Tower Peak Station, the young stock support block for Canlac and another equity partnership Singletree Dairies.

It was a big move to step away from running Canlac.

The farm had long been heralded as one of the region’s top performers for profit and pasture management.

Tony was known to Jim and Sue, through his involvement (which he still has) in their Missouri farming enterprise Focal Dairies.

Tony says he looked at an equity partnership option because it gave him the best chance to make the most of the equity he had.

“I knew I could work with the people involved and that was very important – we share a high profit-focus philosophy – it’s not just low-cost. They’re prepared to spend money to make money, they like to see their cows well fed and I knew they were all self-made people – they were all successful at what they were doing.

“You have to be able to get along with each other, have some fun, be up-front, be able to communicate and express concerns without it causing issues or getting personal and I knew I could do that with these guys.

“If there’s a win:lose situation anywhere in it or anyone feels aggrieved it’s never going to work – it has to be fair.”

Tony says he came in to the partnership with a long-term view rather than seeing it as a vehicle to something short or medium term.

“I wanted to grow it – one, because I wanted to really utilise my skills and, two, because I’m not getting any younger.”

On Canlac the structure involves the equity manager and the farm’s other partners having shares in the sharemilking business, Datona, which owns the cows.

Datona then has a share, along with the other partners, in Canlac Holdings – which owns the land and Fonterra shares.

“The structure gives us a chance to be involved at scale and it gives us an opportunity for income from the sharemilking business as well as the management salary and dividend from Canlac.

“But this structure also gives us security in the land, so through the payout downturn we did better than what we would have if we’d been straight 50/50 sharemilkers.”

While Tony admits he was nervous at first to follow in Russell and Leanne’s footsteps, the high-octane performer has proven himself well and truly, stamping his mark on the business with record performances from the farm.

They spent money upgrading from Rotorainer to an additional pivot, grew and utilised more grass and were able to increase cow numbers.

They also invested in a feedpad to significantly improve their utilisation of bought-in feed.

“With land prices so expensive we looked at how we could get more out of the same area to grow the business. Effectively we’ve been able to achieve an extra farm’s worth of production off the same area in a very profitable way.

“Going into our fifth year we’ve had two years of record low payouts so our business growth hasn’t been quite as fast as we would have liked but we’ve made money every year, we’ve paid down debt, the business has paid down debt and we’ve had the ability to leverage and borrow to grow more shareholding,” Tony says.

“We had to earn that right for the other shareholders to allow us to leverage against our share in the farm, they’re essentially our guarantors. It wasn’t something that just happens – it comes after you’ve proven you can get the performance.”

It’s allowed them to grow their involvement in what is now a bigger business with Canlac purchasing and converting 184ha across the road.

It’s also creating a more-sustainable business in terms of cow and nutrient management.

All the partners agree communication is also key to the smooth running of the partnership.

“Communication, reporting and keeping to your plan are key to making it work,” Tony says.

“If you vary from the plan you have to let people know why. I like a no-surprises policy – honesty is huge in these kinds of partnerships.”

While having all their equity tied up in the business means they don’t have options to take on any other ventures of their own Tony says he finds the scale motivating.

“I really enjoy dealing with other people all the time – intelligent people – it’s so stimulating and motivating. If I was on my own I just wouldn’t get that kind of challenge and enjoyment.”