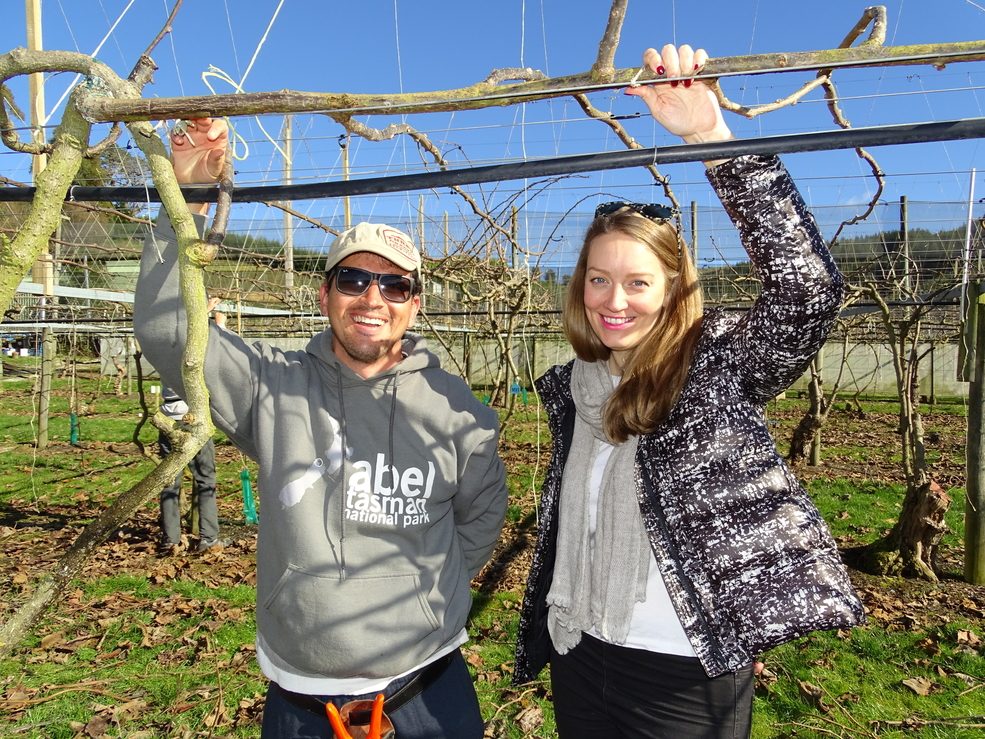 Envisage an app on your phone where you can look for seasonal workers to help through calving and all the paperwork has been done before they even arrive on the farm.

Genevieve Griffin-George knows what it is like trying to find staff and then spending time again and again collecting all their information and getting them signed up, so she created PICMI, an application that connects employers with workers and gets all that documentation done.

PICMI (as in Pick Me) won three awards for innovation at the Mystery Creek Fieldays this year and the business is now working with growers and other industries using seasonal staff to enhance the technology even further.

The 28-year-old discovered just how much time it takes hiring staff when she was called home to look after her parents’ small kiwifruit orchard near Nelson three years ago after her father was hurt in a tractor accident. She had been working in architecture and spatial design in France, so did not consider herself a technical whizz, but realised technology was the path toward a better system for employers needing seasonal workers.

So she began jotting down ideas and applied to an accelerator entrepreneur programme in Sydney. Winning a place on the programme provided technical and advisory support to build the technological platform for her fledgling business.

Part of that process has involved working with growers in New Zealand and Australia to develop an application that covers their needs as well as the needs of the seasonal workers. The result has been a mobile app for seasonal workers to use, plus a desktop application for employers to analyse information about potential workers.

“We’re the translator between what a grower wants and what a worker needs. We spent time interviewing and researching to really understand what growers and workers needed.”

Through her research, Genevieve found that growers want workers for a specific date and length of employment and they want all the administration done. PICMI gathers the information for each worker including where they want to work, how long they can work, when can they start work and what skills they have to offer. Plus, it has details of the worker’s bank account number to create PAYE accounts, personal identification such as passport number, visas, contact numbers and emergency numbers, health and safety details – all the information employers need to gather when a new seasonal worker joins the staff. To access PICMI, employers pay a subscription, with that pricing model still being worked on and probably resulting in a tiered subscription that relates to the number of seasonal workers required for a business.

From her experience working on the kiwifruit orchard with seasonal workers, she says it took about an hour to get the paperwork in order for each new worker whereas PICMI takes about 30 seconds to hire someone and all the details are done.

For the seasonal worker, the application provides the details of work available for the time period and location that suits the worker. That may be horticulture, but could also be dairying, meat works or even hospitality – whatever seasonal work is going that fits their request. For those on holiday working visas or similar, it notifies them of jobs that fit their itinerary.

‘It took about an hour to get the paperwork in order for each new worker whereas PICMI takes about 30 seconds to hire someone and all the details are done.’

When an employer wants to find a seasonal worker, PICMI will supply a list of potential workers specific to the employer’s needs, which as Genevieve says, is better than scrolling through long lists on different websites or checking out the local backpackers to see who might be around for the type of work they offer.

“To me it’s a global issue and not just affecting New Zealand. We’ve had people from around the world looking at an alternative to finding workers and the plan is for PICMI to provide this global workforce. You will be able to track where people have worked and for how long so you will be able to see what they have done and eliminate the need for CVs.”

In New Zealand alone, she hopes PICMI will be a way of attracting more people to seasonal work without the paperwork hassle. She says about 60,000 people come to New Zealand each year on working holiday visas, while 170,000 university students look for holiday jobs. Using technology that can be accessed via their phones should appeal to the younger generation and she says that may encourage them to try types of work that they wouldn’t have otherwise thought about.

Then there are the grey nomads stopping around the country during their retirement and parents wanting work during school hours who could have a profile on PICMI that listed the dates and hours and locations they could work.

“People want to know they have a job when they arrive in the country or region – we’re going to be the organisation that helps them do that. And growers will know in advance they have people arriving to work and what skills those people have.”

Until now, seasonal workers looking for work year after year have to fill in the same forms each time, but Genevieve says that’s such a waste of time. Instead, her technology will have all the information ready to go for the next job, while employers can send an automated email to workers they have previously employed through PICMI and want to invite back the following season.

“Employers can write reports on workers for themselves and rate them for other employers,” she says. The application will remember all the information and remind employers, for example, that they put out an advertisement last year for five people for a certain job at a certain time.

She says one of the reasons many Kiwis don’t apply for seasonal work is because it is just that – seasonal. She hopes PICMI will be able to connect Kiwis with ongoing seasonal work throughout the year, which may mean horticulture, agriculture, hospitality or whatever industries need seasonal staff.

PICMI can be used on any device so employers may be using a desktop-based system while employees may be using an app on their phone. It’s built in a modular way to work with different industries and it is still evolving. As it develops further, Genevieve envisages it will have the ability to predict when harvest is ready, whether a labour shortage is expected and the impact of the weather.

At this stage she is running a pilot programme with different employers to fine tune the technology and ensure it fits the needs of employers and employees.

The plan is to test it with employers in a range of industries who need more than 100 seasonal staff each year to make sure it covers every aspect for long as well as short-term work. She says too often technology is developed and then sold to the agriculture and horticulture industries without their input, whereas she is intent on working with industry through the build stage to get a product that fits their needs.

Part of the build stage involves digitising all the paperwork including contracts so employers and employees can sign online and workers are ready to go as soon as they arrive on the work site.

“For us, it’s about working with industry from the get-go. It’s pulling in industry standards and requirements like Horticulture New Zealand’s seasonal employment agreement and integrating that into our system.”

Showcasing PICMI at the Fieldays this year gave the fledgling business a boost, winning the Grassroots Prototype Award, the Vodafone Innovation Technology Award and the James and Wells Innovation Award, plus picking up more than 100 leads for employers in a range of industries.

Seasonal staff pruning kiwifruit on her parents’ orchard were found on the app and some had previously worked on other orchards in the region using the app. Gabriel Mello from Brazil found information about PICMI at a hostel in February and used it to apply and gain seasonal work. He has since been back to Brazil and returned for pruning, using the app to find work.

In the past, Genevieve’s father, Ian, put a notice up at local backpackers to find seasonal work and then had to go into town to check people were physically able to work under his 2m high kiwifruit frames. Whereas PICMI collects all the workers’ data and past work experience so now Ian has more accurate information readily available to select the right workers.

From her experience managing the orchard and the time she has spent talking with growers, Genevieve says it’s obvious that people want to spend less time on time-consuming tasks like paperwork that takes them away from the orchard. She says the point of the technology of PICMI is to give them the space to focus on being more innovative and proactive in their business.