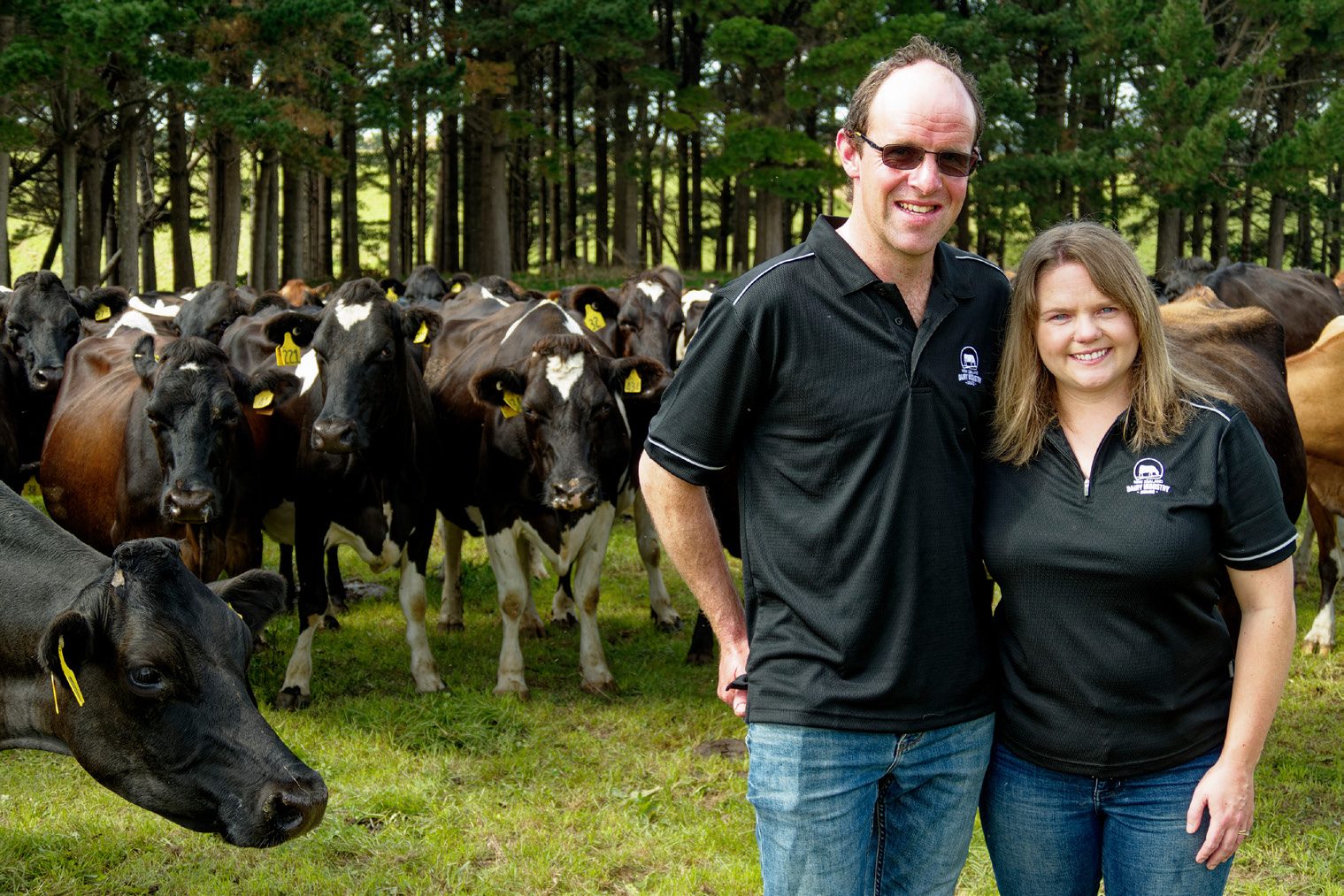 Moving back to their home province after a tough time on the West Coast was a great move for Murray and Rachel Perks, and meant they could take their dairy careers forward in a family business and close to a supportive community.

The couple, both in their mid-thirties, won the Taranaki Sharefarmer of the Year Award for 2022.

Taranaki-born Murray was a DairyNZ consulting officer for two seasons, prior to beginning as a Lower Order Sharemilker in Opunake 10 years ago.

“I went from Lincoln Uni into a position with DairyNZ in the Waikato, and I was seeing lots of keen young sharemilkers having success, so we thought we should have a go, while we were young.”

Rachel is a trained speech and language therapist, from a sheep and beef background in the Forgotten Highway country, and has managed to transfer around regions with her Special Education speech therapist role, while helping out with relief milking and rearing calves, and children Callum (8), Matilda (6) and Jack (3) who are all involved in school, sports and early childhood education locally.

They moved to Hokitika for two seasons in an equity partnership/lower order position, before moving to their current role in South Taranaki six years ago.

They were there when the payout crashed and building debt rather than equity was a hard time, with extended family health challenges coupled with isolation and distance from family support. They made the call to sell their equity partnership at a significant loss, and relocated to Taranaki where they were offered the opportunity to take up a 24% VOSM contract milking position for Murray’s uncles and aunt Alistair, Stephen and Imelda Abbott, on their Abbott Trusts Partnership 134.45-hectare, 445-cow Hawera property.

“We really appreciate the opportunity they gave us and it has meant after six seasons we were able to pay back our debt and save our equity to the point of going 50/50 sharemilking next season.” 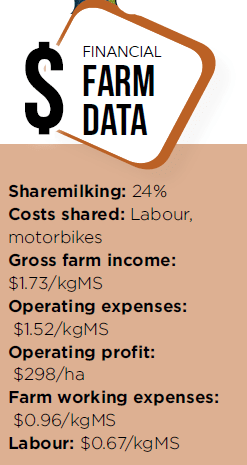 “Plus it meant we were able to come back to the farm that I grew up on which has been special with our family to grow up with family around and community closeby.”

Learning from the experience has made them highly aware the volatility of the payout and this year they have invested in the derivatives market to hedge their income for next season with milk futures.

“Our risk appetite has been tempered with our experiences from the last drop in payout, so I took the opportunity to do a training session with our accountancy firm Baker Tilly and our accountant Jordan Hartley-Smith and decided to invest in locking in a portion of our income.”

Judges were impressed by their journey paying back debt and the business scenarios that Murray and Rachel had prepared to analyse their future options and plans.

They also prepared budgets for the next two seasons of their 50/50 job and the status quo accounting for advanced and retained milk company payments.

“We showed them scenarios comparing our different options and looked at our equity pathway on a longterm payout of $6.50 vs. an $8 payout,” Murray explained.

Their work won them ANZ Business Performance Award, among a slew of seven merit awards.

Murray and Rachel were pleased to win the Meridian environmental and sustainability award, saying that their farm owners were well down the path of riparian fencing, so the couple have just managed to finish off the planting programme on smaller tribuaries and a couple of small wetlands with plants organised by the Abbotts.

The other key learning from their time on the West Coast was to recognise and support mental health of themselves and their staff. For their young team of fulltimers Jacob Beardsly and Jaymi Ngaia and part-timer Hanna Anderson the couple run a shorter roster so they work 11 and 3 off, including a weekday off after the weekend they work. This way the team all have a town day every fortnight with time away from the farm.

“We recognise the importance of time off, and because we have battled with mental health in the past we have empathy and understanding and are able to facilitate anyone in our team with similar challenges.”

The team are encouraged and rosters organised so that they can also take part in sports. Murray plays club hockey at the Premier grade level and indoor soccer in a team organised before he aged out of Young Farmers. Jaymi plays in the Taranaki womens rugby team, the Taranaki Whio. As a well-established Taranaki farm, Murray said the Olsen P levels were high and they have been able to cut back on phosphate fertiliser, mining some of the fertility down from up in the high 70s, and safeguarding against loss of P through leaching.

Having 5 transect lines across the farm representative of the soil types and conditions means the couple get a good reading of the fertility levels and with the fert company can plan best use of fertiliser inputs.

The couple have continued on the high levels of dairy hygiene set by their farm owners on what Murray describes as a very good shed, with procedures laid out for plant startup, plant wash and cleaning the air lines.

Even the tanker track and driveway are tidy and inviting with what Murray says is a good look for the industry.

“We also take a lot of pride in our milk quality and that has paid off in a low average SCC of 76,000 for the season.”

It also paid off in winning the Ecolab Farm Dairy Hygiene Award.

Their emphasis on keeping their team fresh when picking cows over the 11 weeks of AI and other excellence in reproduction strategies earned them the LIC – Animal Wellbeing, Recording and Productivity Award.

They have dropped bulls out of the system, finding that AI was cheaper than running a team of bulls, alongside the effect of minimising M Bovis risk and also reducing the health and safety and risk of breakages that bulls wreak on properties and staff.

But of course keeping up accuracy of picking cycling cows for that length of time is not easy (4 weeks of pre-season heats and 11 weeks of AI), so Murray has had to train staff in observation techniques – checking at milking, looking when out in the paddock, always being observant and picking up those cows for insemination. Introducing teaser bulls into the two herds (one of older and one of younger cows) has helped reduce the empty rate from 17% to 10% last season.

The cow herd is well established and high performing with 100% ancestry recorded and Murray is proud of the fact it is the third LIC registered herd in Taranaki and in the top 10% of the country for indexes.

“We have a definite focus of keeping pace with the national standards, and while we spend more than the average on animal health we try to be more preventative than reactive.”

Strategies include teat sealing all heifers and minimising metabolic issues by feeding Rumenox through the Dosatron unit which Murray also thinks helped drive down the empty rate and reduce downer cows in spring.

“We try to get ahead of the game before things become an issue.”

Health and safety also comes under that ‘be prepared’ banner, and won the couple another merit award.

With a mixture of paper-based and digital recording they keep their team up to date with H&S needs and issues – writing minutes at their weekly team meetings, and recording incidents, near misses and conversations on their SafeFarm app, on the FarmIQ software.

An info sheet / map for contractors to sign into the property highlights ‘No Go’ zones for vehicles and fortnightly meetings with the owners means that H&S goes “down from owners level to the boots on the ground level” Murray explained.

They are excited abut the future, moving to the 50/50 position on another of the Abbott’s farms next season and buying the 320 cow herd with similar high levels of recording and performance as their current herd, and their goals include paying off their herd, funding their children’s education and looking into off-farm investment.