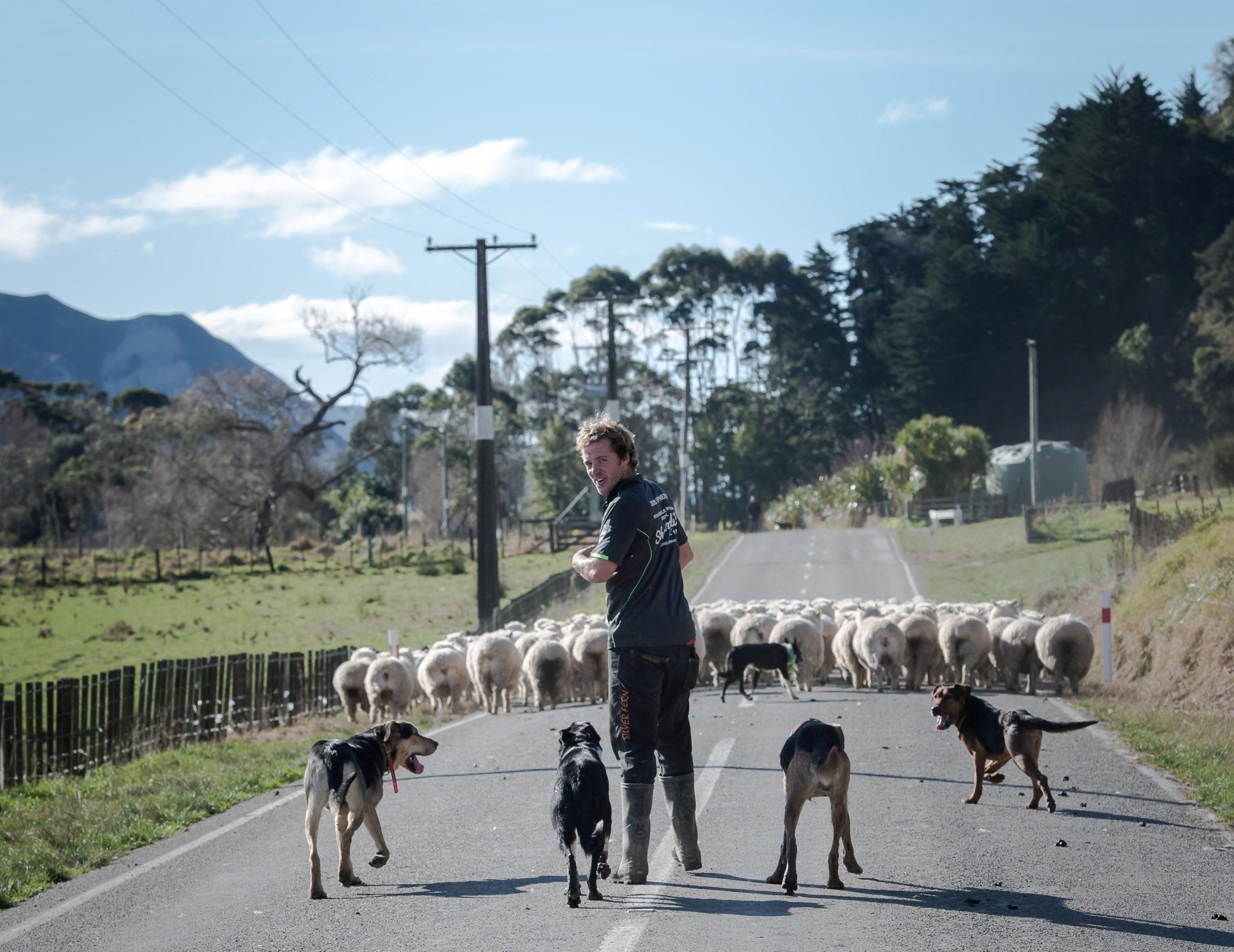 Growing up in town hasn’t stopped James Beattie getting completely immersed in agriculture. He has found a way to balance his passion for drystock farming and dog work while still being able to build equity to work towards his goal of owning a farm. Samantha Tennent reports.

Studying agriculture was the only option James Beattie considered when he finished school. He grew up in Rotorua and neither of his parents were involved in agriculture.

James had some exposure to farming through extended family but his hunger came from spending weekends hunting and fishing. He knew he wanted to be outdoors.

He graduated from Massey University with a Bachelor in Agricultural Science in 2014.

“I did consider ag commerce but I was more interested in the science.”

“I knew I could change what I was studying if I didn’t enjoy it once I started but I loved it.”

He spent a summer on a dairy farm close to Lake Rotoma, near Whakatane. It was a 600-cow Jersey herd. After completing university James went back to work another stint on the farm.

After a few months an old flatmate from Massey, Aiden Cunningham, offered James a role on the big dairy operation he was managing in Missouri, United States. It didn’t take much convincing to get James on the plane.

“I’m always keen on an opportunity to learn something. I wanted to see something different and build my skillset.”

The farm had 1500 cows under a split calving system and predominantly New Zealand genetics. The herd lived outdoors and their diet was 50% supplement fed on a feedpad.

“They were trying to take advantage of both systems, combining feed and pasture but the climate wasn’t like NZ.”

James spent 12 months in Missouri before returning to NZ. He floated around Rotorua and helped his Dad and brother, Mackenzie, renovate a rental property the family had bought before James shot overseas.

At the time Mackenzie was doing his building apprenticeship and the house offered the opportunity to develop his skills further. When it was finished they sold it, making a good profit.

From here the family have continued to chip away at little investments in the property market.

“We work together as a family to build equity. We buy a house or a section, depending what’s available and what the market is doing at the time, and improve it ready to rent or sell, splitting the profits.”

The family operate in an equity partnership, which includes James, Mackenzie, their sister, Annabelle and their parents. They utilise the skills within the family to create the return on investment.

“It’s a simple system, we record and split the profit according to time and money invested by everyone. We enjoy doing it together.”

James went dairy farming after university because he could see the equity pathway but the property market has helped him realise there are other ways to build equity outside of farming. His end goal is to own a drystock farm.

Until recently, James had been a block manager in Taihape for three years. The farm was 650 effective hectares with three staff, James and the owners, brothers Rob and Andy Law.

In July he moved to a new job in Tolaga Bay on a 2100ha sheep, beef and cash cropping operation owned by the Hauiti Corporation.

The Taihape operation was split over four blocks and James was responsible for two of them.

There were 8500 stock units of sheep. The ewe flock are a Coopworth base but they are moving towards Easy Care sheep to reduce the workload.

“They still have a fleece but no belly and they’re clean around the points and tail.”

At least 80% of the lambs are finished. The beef cows on the Law’s farm are a mix of Angus, Hereford and Friesian and mated to a Devon bull.

James says they are chasing hybrid vigour. All the beef is finished.

One block has Red deer. They buy hinds as weaners and finish 150-200 each year. There is also a small herd of nanny goats and their offspring are sold to the works.

“The goats are a meat breed, Kiko. They’re the weed eaters, they follow everything else and clean up the thistles.”

They operate according to the facilities available on each block. One does not have any yards so it carries lambs for a portion of the year but cattle the rest. On another, they limit the number of mobs due to rough fencing. The other two are well established.

Two of the blocks are on long-term lease, they improve them as they can.

“They’re all within a half hour of each other which works well.”

The owners planned and James took care of the day-to-day.

He has a team of six dogs and was fortunate when in Taihape to be mentored by a local farmer, Jamie Shrubshall.

“We met at dog trials, I go around most evenings to train dogs. I am very grateful for the skills and hospitality from Jamie and his partner Aleisha.”

James enjoys dog trials, valuing them as a good place to learn and build a network in the community. His main dog was injured this season but he has some young ones who will be ready next year.

Young Farmers is another avenue James has built his farming network. He started in the Massey club where he was involved in many events, appreciating the personal development opportunities the university club provided.

He had a break when he left Massey but while at Taihape he was involved in the local club, Marton Young Farmers. He sat on the committee as a vice chair and regularly organised events and helped where he could.

James has competed several times in FMG Young Farmer of the Year District Finals. This year he was successful and landed a spot at the regional final for the Taranaki Manawatu Region. He was put through his paces through the technical and practical elements at the event in Wanganui early April and enjoyed giving it a go.

“The contest is an awesome way to learn and grow skills. I like the competitive side, it’s a great way to beat your mates.”

James also gave back to the agricultural community by tutoring at Taihape Area School. He spent one day a week with the class of 10, consisting of year 11 and 12s.

“It’s a small school, they can choose what they want to be involved with outside of their core subjects. It’s great agriculture is an option.”

The learning is NCEA-credited and James tried to build their skills to prepare them for the future. His personal experience helped him understand what they needed.
James promotes agriculture as an opportunity for anyone.

“Don’t be afraid to show you’re passionate about what you’re doing.

“Try to do everything you do well and the best way it can be done. Learn off different people, you’ll pick up different bits from each person.”