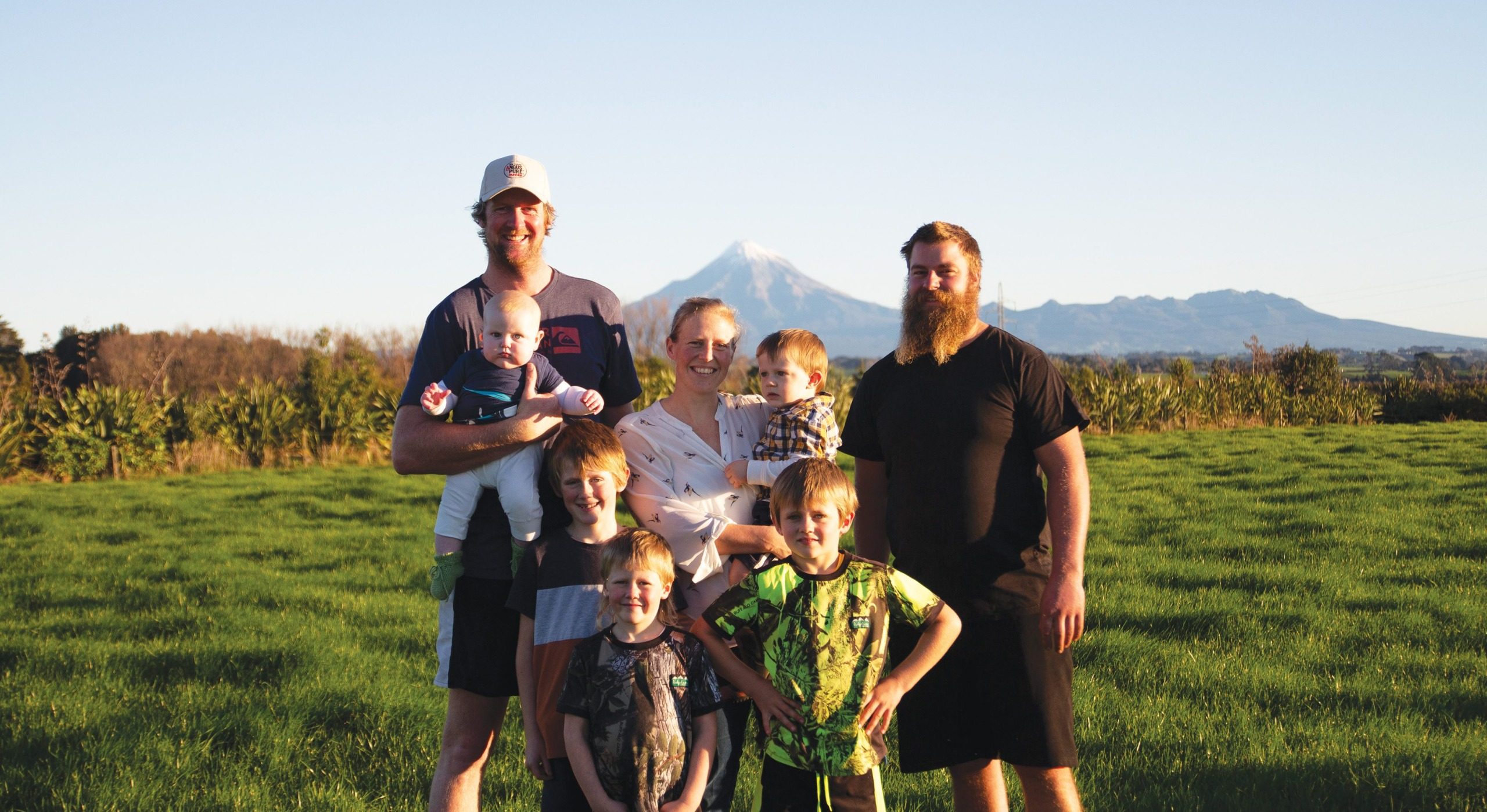 Good pasture management and correct soil nutrient levels work together as the key to success on a North Taranaki operation. Jackie Harrigan reports.

After 10 years of sharemilking in Waikato and for the past three years in Northern Taranaki, James and Melissa Barbour have honed their systems to sum up their farming ethos.

“We are pretty big on pasture production - and it all starts with the soils,” James says.

Coming from a low-input system in the Waikato, the pair said they had never actually been to Taranaki before they were approached to take on the sharemilking contract at Trewithen Farm, home of the Faull family, who have owned the property and gradually increased its size for many generations.

The Barbours had never farmed with a feedpad or in-shed feeding before, James says, so they had to be careful not to substitute feed for pasture because they could more easily feed out supplement.

The farm is milking all year round, with 380 autumn-calvers and 700 cows spring calving, and the kind climate and free draining volcanic ash soils promote grass growth year round.

But protecting those high-producing soils is very important and using the feedpad and the runoffs play a big part.

“It’s important for us to be able to get the spring calvers off the farm on to the runoffs once they have dried off - this allows us to maintain a 100-day-plus grazing round through the winter and keep grass as the main part of the winter milkers’ diet.”

Looking after the pastures is really important, James says, and rotational grazing has a big role to play.

“We put a lot of effort into making sure our pasture management is right - we focus on leaving good residuals and would rather leave a bit more than hammer the pastures - but we are happy to use the mower if we need to.”

When they arrived at the property they reduced the stocking rate by 160 cows, to lower the liveweight per ha and build on the per cow production. The 600 cows from their previous job were lighter framed Crossbred cows and the existing cows they bought were slightly heavier, more Friesian cows.

The couple challenged themselves to increase production above the previous five year average (502,000kg milksolids) but to ensure they were doing this profitably. Per cow production has been

lifted from 400kg MS/cow in three years to 533kg MS/ha and over 2000kg MS/ ha, driving up the efficiency of the cows to produce more than 100% of their liveweight each season.

The autumn herd is operated on a system 5 with pasture a key component of the winter milkers’ diet.

“We have the infrastructure and ability to maximise production but from balance date onwards we start to pull back supplementary feed.”

The spring herd runs at more of a system 4 level with cows getting supplemented on the feedpad till mid November and back on the feedpad in March when supplement is usually needed to fill in the summer dry deficit.

Last season, supplement consisted of 874 tonnes of palm kernel, 326T meal and 55ha of homegrown maize (runoffs) along with molasses. Transition minerals and straw are important parts of the cows’ diet prior to calving and are used to lower the DCAD for both the spring and autumn herds.

“We have the ability to efficiently feed supplement with the feedpad, a mixer wagon and the in-shed feeding system so we took the opportunity to feed more and maximise production while margins allowed in this higher payout season.

“We have created flexibility in our system, which means we can adjust inputs depending on forecast payout. We are resilient because we maximise pasture harvested, grow all our own maize silage and contract feed prices - so we don’t get forced into a higher priced feed market during a dry summer/autumn.”

The sharemilkers aim to keep their farm working expenses between $2.10 and $2.20/kg MS each season. With a payout of around $7.20/kg MS, this season was good for the Barbours, who after 13 years of sharemilking are getting closer towards their long-term goal of buying their own farm.

When the family arrived at Trewithen three years ago, along with their 600 cows, they brought three sons (and two more have been born in Taranaki) and Melissa’s brother Jason Groot who works with them (along with his partner Cat, who helps out when she can).

“Having Jason has made the whole job more doable, because we have complementary skill sets and work really well together,” James says.

Jason and Cat have bought into the Barbour’s sharemilking business and are on the farm whenever James and Melissa return to visit the Waikato where they have a 160ha drystock lease property.

This farm is used to grow their young stock and finish 150 dairy-beef animals each year alongside a few sheep and a developing Angus stud herd, Parakau Angus, which supplies bulls for their sharemilking business, and makes them largely self-contained.

‘It gives us diversity and makes our business very flexible as we can pull stock out and shift them around and we have a casual manager who runs it for us.”

“We love dairying and really enjoy the drystock as well and it gives us a good chance to visit both of our parents who live nearby,” James says.

The Faull family have many and varied business interests, including a chain of international hotels, the Swiss-Belhotel International. James says it is great working with oversight from such astute business people, who are always encouraging them to be innovative and challenge their progress.

“We are entrusted to make the majority of the onfarm decisions, but we have regular catchups with both Gavin Faull and his son, Oliver Faull and enjoy their insight into the operation and their pride in their farm.”

Gavin has always had a target of 600,000kg MS for the farm, which James says is possible, especially expanding the platform to 300ha.

“We’re getting close to Gavin’s ambitious target; with another 20kg MS/cow we could get there - and upon doing so Gavin says he would take us all to the Hong Kong Sevens!”

The Barbours also brought their longtime farm consultant with them to the farm, Mark Dodd, from Tauranga, who is always challenging them to find the best outcome for the cows, the farm and themselves, and the group all have a 6-8 week meetings on the farm.

When they first arrived they questioned whether the farm should be growing more pasture - expecting about 15/16 tonnes of drymatter (DM)/ha/year.

Whole-farm testing, at a cost of about $7000, identified a variable level of fertility so they quickly decided to use the next two years to address any imbalances paddock by paddock. With advice from Ravensdown rep James Livingston they formulated a capital fert plan that used five different tailored mixes using the HawkEye system to capture paddock fertiliser history, capturing soil test results, ordering product and monitoring placement.

“Testing the whole farm was complicated but it was really important that we got it right. The farm owners were really supportive and this was appreciated by us, as sharemilkers, as we know fertiliser is always a large investment. After two years of the programme and another round of all-paddock testing, we are seeing some massive gains with Olsen P lifted from 20-25 up towards 30-35 and potash levels back up to optimum.”

The tailored fertiliser plan has overcome any other trace element deficiencies and addressed the problem of very little clover in the pasture sward.

“We started seeing clovers return as the fertility improved.”

James intends to repeat the all-paddock testing every few years, saying it is a good investment.

“You don’t have to go long to realise the savings in the fertiliser programme - it’s important to know the levels of nutrients in each paddock - not just the average across the farm.”

While the Barbours are renewing pastures on the runoffs with a mixture of deep-rooted herbs and grasses, on the milking platform they concentrate on renewing 20-30ha of chicory each year into a mix of Governor, One50, Maxxam and always add clovers, as well as oversowing clovers with fertiliser.

Effluent was previously applied by a low application system but the Barbours felt it wasn’t working well for the property - and with no solid separation the small nozzles were regularly getting blocked.

Changing to two travelling irrigators and a summer rain gun has made the system more simple and robust and means that they can get enough effluent on to 50- 60ha a year of the 140ha effluent area in 2-3 applications to reduce the need for any other fertiliser on those paddocks.

Nitrogen is an important part of the Trewithen Farm fertiliser programme, and James uses it as a strategic tool to grow more grass.

“By using N to grow more plants, we are adding to the organic matter in the soil.”

Applying their own fertiliser allows them to be careful about timing, placement and maximising N efficiency.

“The timing and rate of application are really important to good N management, we use it as a tool and the most profitable use is to identify any feed deficit early and apply N to fill the gaps.”

“We are also using N-Protect to cut down the N loss from volatilisation - as the climate becomes drier we will be seriously considering using the protected product year round.”

With two years to go on their sharemilking contract, the Barbours say the farm and herd is in a sweetspot, they know what works and just need minor tweaking now and then to improve efficiencies. The couple has loved seeing the benefits of feeding their cows better - banking the profits from improved production and the advantages of better reproduction rates and better animal health outcomes.

Now they just need to unlock that last 20kg MS/head to get them to Hong Kong.