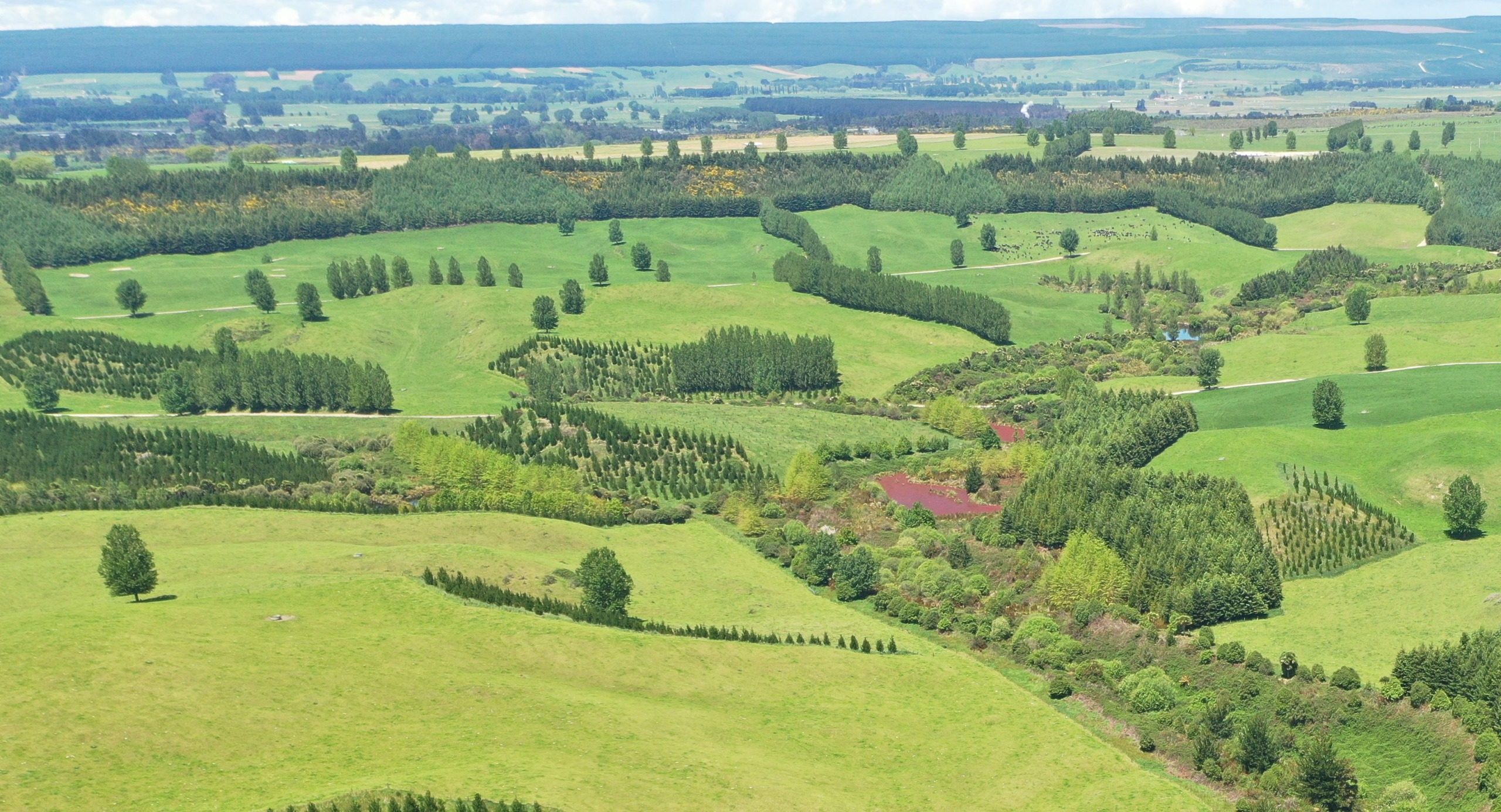 Where vast swathes of pine forest once covered what is now Wairakei Estate, 19 dairy farms have taken their place. By Elaine Fisher.

Despite reducing stocking rates on Wairakei Estate by 15% since 2015, per cow performance is up by 20%, says Shaun Neeley, Pāmu Farms Head of Farming for Pastoral.

“The business is now achieving its highest per hectare performance while having a lower stocking intensity than in the past. This improvement in efficiency has resulted in an improved cost structure with items like animal health, breeding and youngstock costs reducing as the stocking rate is reduced,” Shaun says.

“The reduction in stocking rates from 3.2 in 2014 to 2.2 dairy cows per hectare today has been driven by Pāmu’s recognition of the need to stay ahead of the curve in its response to Government policy and direction. A big decision was made in 2015 around stocking rates, nutrients and the dairy downturn at the time.”

Formerly Landcorp Farming Limited, Pāmu Farms is New Zealand’s largest corporate farmer and is one of Wairakei Estate’s close partners. Pāmu Farms runs 19 dairy farming operations, milking a total of 19,500 cows on 9100 hectares with youngstock on a further 3300ha of pastoral land on the estate, just north of Taupo. Its lease of the farms is due to end in 2049.

The properties are between 400 to 2000-cow farms. Each has its own dairy and all but the herringbone shed on the smallest farm, are 54 to 80-bail rotary platforms. The farms supply milk to Synlait, Miraka and Fonterra factories with a mixture of organics, A2, winter milking and farm assurance programmes (Lead with Pride and Te Ara Miraka) offering options for adding value over standard milk pricing.

In a further move to meet environmental standards, four of the estate’s dairy units are managed organically with one having completed full organic certification and three more in the conversion stage.

“Our organic farms are irrigated and had, as conventional farms, the highest levels of nutrient leaching across the estate, so it made sense to convert to organics and reduce the stocking rate and inputs while being supported with the organic price premium. These farms are now not at risk of failing to meet nutrient leaching levels in line with what the Waikato Regional Council wants to see.

“Converting to organics also offers the opportunity to earn a premium for milk while dropping the stocking rate to take a load off the environment. There has been 30-40% less N leaching from those farms since converting so the conversion for them was a no brainer.

“Organic conversion at scale in a corporate setting is quite rare and requires careful attention to organic principles and input restrictions. Pāmu’s successful work in this space is a real credit to our Organic Business Manager, Cleo Te Kiri, and her team.”

The company uses Overseer to gather information about the farming operation’s environmental impacts, including green house gas emissions. Shaun says there is no apparent ‘easy fix’ as cows which efficiently convert pasture to milk are also those which consume more feed and therefore produce the most emissions.

“However, we continue to look at the data and the efficiency of our systems. There are some very clever minds in the science community seeking solutions which we are very keen to trial.”

All 19 farms have the light ash and pumice soils of the volcanic plateau, classed by the regional council as typically erosion prone.

“However, we are farming on beautiful flat land and with careful planning when resowing pastures, the erosion risk is manageable,” Shaun says. He joined Pāmu in November last year after overseeing the conversion to organics of a large-scale corporate dairy farming business in the South Island.

Dairying on the volcanic plateau is not easy, especially given the very light soil structure and the climate, with cold, frost-prone winters and long dry summers.

“In summer it can be dry for up to six weeks and often, despite frosts we grow more grass in winter than in summer. Spring was late this year and grass growth has been disappointing. A wet summer would be very nice.”

Developing fertile topsoil and pasture on what was previously forest land takes time and careful management. The earliest farms were converted to pasture from 2005 and more came on stream as additional individual forestry blocks were felled, meaning the farms are at different stages of development and fertility.

Pasture renovation and renewal is on-going, especially when dry summers see some grass species die. Where possible paddocks are under sown and work is continuing to find the best pasture species, or mix of species, which suit the sometimes harsh environment.

“We are fortunate that Pāmu has excellent agronomists on the team who work with us on farm production systems and environmental indicators. There is a lot of discussion about the value of multi-species in the sward and we are big enough to be able to test ideas and carry out research trials.”

Lucerne is grown for supplementary feed, either as cut and carry or grazed in situ and some additional feed is brought in from a Pāmu drystock farm at nearby Aratiatia. Pāmu does not use palm kernel. Grain is fed in-shed. Other inputs are maize and grass silage.

“Trial maize crops have been grown in the last few years. Even though the land is frost-prone, it is worth trying to find a variety which suits these conditions.”

Investigation into different pasture and supplementary feed species to boost production while keeping stocking rates low is not all Pāmu is doing. It’s also looking for genetic traits which might make cows more suited to once-a-day milking, without a drop in production.

The herds, predominantly Kiwi Cross F9, are milked twice a day with targeted OAD milking introduced for animals which are struggling pre-mating or because of weather conditions.

“Massey University is researching to develop cows that will be genetically suited for OAD throughout the season, and we are in the early stages of talking to them about carrying out trials here.

“Once again, because of its scale and ability to capture good data, Pāmu is often involved in trials of new technology,” Shaun says.

“That way we not only produce a more valuable animal, but also give it a better life and address some of the concerns from consumers around bobby calves. The Stabiliser bulls from Focus Genetics generate a fast-growing dairy beef calf that adds a lot of value to our system. We are also investing in a large-scale calf-rearing facility on the Estate to grow more non-replacement calves through to 100kg when they will be sold to our livestock farms as an efficient beef option.”

The 19 farms, and two support businesses, employ a permanent staff of 130, with numbers increasing to 150 at calving.

“Only six or seven of our current staff are immigrants. In the past we have employed a large immigrant workforce, but Covid-19 has created complications and many staff have gone off-shore. As is common in the dairy industry we have a constant challenge filling vacancies and are always looking for staff.”

Staff health and safety, welfare and training have high priority. All staff have personal locator beacons when working in remote parts of the farms; high viz gear is standard and side-by-side vehicles rather than quad bikes are used. “If anything needs towing it’s done by tractor or ute. Staff have 104 rostered days off per year and while long hours may be worked at times during calving, we keep a close eye on hours to ensure no one works longer than they should. All staff have the opportunity and are encouraged to take up industry training.”

While farms were developed, each with their own name (all of them for famous ships) and signature stands of exotic trees lining the driveways, modern homes were also built for staff. Shaun says the brief was to not only create efficient farms but a beautiful landscape that integrates natural features and supports the ecological integrity of the area.

Owned by Wairakei Pastoral Limited, Wairakei Estate began its forest to farm conversion in late 2004, and encompasses more than 25,000ha of land, with nearly 150kms of rivers and streams flowing through it, including 28km of Waikato River frontage.

This leaves a diverse mix of land use that encompasses 1450ha of wetlands and riparian areas which encourage native biodiversity to thrive, and ultimately about 8000 ha in re-established forestry.

The 19 dairy farms, one sheep farm and associated support blocks which make up the properties under Pāmu management have been developed in succession from forestry blocks in what has been a very large, very public and sometimes controversial conversion.

Much of the conversion happened on either side of State Highway No 5 so the felling of pines to the fencing and establishment of pasture and building of homes and dairies has been very conspicuous to the passing public. Many questioned if dairying on the volcanic plateau was the right use of the land, or indeed, given the free-draining nature of the pumice soils, even feasible.

Seventeen years on, in Spring 2021, the landscape has been completely transformed from tall forests obscuring the horizons, to wide vistas, dissected by large riparian areas, across gently rolling green pastures planted with young ornamental and shelter trees and grazed by dairy cows and calves.

vamtam-theme-circle-post
 Category Dairy Exporter
Pareka farm has gone through a significant change in farm system this season with the aim...
 Tags Dairy Exporter May 2022, Special Report - GHG Emissions
Read More

Gen Z to make their markMeasuring it, to be sure