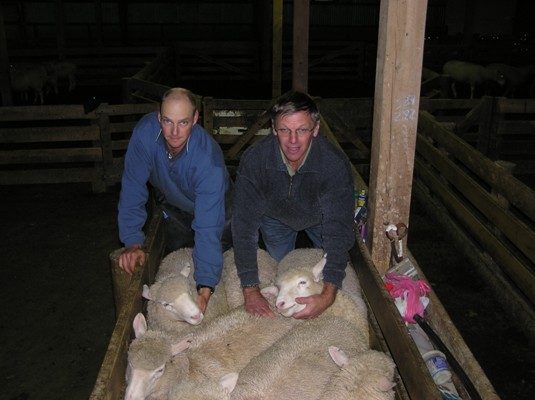 Google “Out of season lambing” and you’ll find plenty of advice from around the world on the breeds, inputs, and pros and cons of the practice. That’s the easy part. Try to find a New Zealander doing it and things get a whole lot harder. Andrew Swallow reports.

Despite independent analysis showing a 29% boost in gross margin/hectare from a three-in-two-year lambing system compared to a conventional annual drop it seems few, if any, farms adopted the system.

What’s more, margin gain was at a time when average price achieved for a 17kg carcase was around $60, so every extra dollar was dearly needed to help cover overheads.

The 29% figure comes from an Alliance trial run 2002 to 2004 on Peter Ponsonby’s Douglas Downs property at Tuapeka West, Otago, but there were other studies at the time which made similar predictions.

Independent consultant Graham Butcher crunched the numbers for the 150 Dorset Down ewe trial, then extrapolated them to a 500-ewe flock and ran a Farmax model based on them.

Thirteen years later, reflecting on the work, he says he believes lack of uptake is due to farmers’ understandable nervousness about making what is effectively a complete system change.

For a start, a breed that will conceive regardless of day length is needed. “Merinos, Dorset Horn, Poll Dorsets will all do it, but if you’ve got to rely on CIDRs (Controlled Internal Drug Release) then it’s just not worth it.”

Stockpol and Farmax calculations show stocking rate should be cut about 14% and supplement feeding increased 14%. Lambs born in the autumn lambing will probably need to be sold store and extra nitrogen fertiliser may be needed to provide high quality feed going into autumn lambings and winter lactations.

“Some crop may be needed too but you need to do your sums carefully to make sure you’ve got enough of it but not too much either. At Peter’s ewes milked very well off good quality silage. Even the lambs were eating it.”

‘Adult sheep only need maintenance feed for two-thirds of the year. There’s no way they should be on high-quality feed during that time.’

Having two mobs on the system one phase out of sync, in the same way as an alternate eight-month shearing system works, will help smooth feed demand and cashflow but increase management complexity.

EID tagging, a tool which was in its infancy at the time of the Douglas Downs trial, would make keeping track of ewes’ performance on such a system much easier today, notes Butcher.

With lambs at $100/head instead of $60 he anticipates similar modelling of the system today would show an even greater gross margin advantage than 29%.

“If you’re considering it you need to sit down with a pencil and paper and work through when you’ll mate, when you’ll lamb, and all the things you’ve got to change because of that. It’s not a system you want to attempt if you’re approaching retirement.”

However, Butcher believes more farms are capable of running such systems now.

Ponsonby says processors’ failure to offer certainty of premiums for out-of-season supply was also a key reason why few farms adopted the system.

“You’d get a good price one year, then not the next. There was no consistency,” he says.

“They’d also pay just as much for old-season lamb, or rather hogget, as they would for autumn-born new season primes.”

Despite that, he’d found lambing his Dorset Horn and Poll Dorset ewes every eight months highly profitable, even in Otago.

“At the time of the trial it was more profitable than dairy.”

More forage crop options and ever-improving establishment techniques, not to mention more and more farms with access to some irrigation, makes providing high-quality feed to late pregnancy and lactating ewes at times other than spring is more easily achieved today, he says.

“It’s not hard to provide out of season feed these days.”

Murray Rohloff, who was in business with Ponsonby importing Ile de France and Charolais genetics, echoes that and believes the time’s right to revisit out-of-season systems.

“Adult sheep only need maintenance feed for two-thirds of the year. There’s no way they should be on high-quality feed during that time.”

Lambing more frequently, particularly in the STAR system (see panel, pXX) or an alternate eight-month system, means there will be ewes and lambs available to optimise returns from high-quality feed year round.

Alternatively, out-of-season lambs can be sold store at times when prices are often at their best, especially as there are a growing number of farms that have set themselves up as specialist finishers with few, if any, breeding stock, Rohloff says.

Several other projects around the time of the Ponsonby/Alliance trial had modelled a 30% or more increase in gross margin from such systems, he notes.

“That’s not to be sneezed at. I believe out of season breeding is one way sheep farmers can make a quantum leap in profitability, much greater than from doing things like hogget mating which doesn’t actually add a great deal for most people.”

However, he doesn’t advocate a whole flock, overnight switch to multiple lambing systems.

“I think you need to grow into it because you’ve got to divorce yourself from traditional thinking and learnings and take a fresh look at the seasonal supply of feed on your farm and the demand from the flock.”

He too says using stock that will naturally breed out of season is key, otherwise the workload and cost of procedures and interventions to induce oestrus erodes most of the margin.

“And it’s not just a ewe thing. The rams need to breed out of season too.”

Annie O’Connell, now of Beef + Lamb Genetics, says research by colleagues at AgResearch Invermay in the early to mid-2000s, and from Massey University, showed 60-67% conception rates could be achieved out of season by synchronising normally seasonal breeding Romney ewes but the cost of hormone injections or melatonin implants made the practice marginal economically.

“We did find ewes from traditional breeds which had ‘break-through’ cycles out of season without treatment but it seemed they weren’t able to pass this ability onto their progeny – though only a few progeny were followed,” she says.

There was also some work with naturally aseasonal sheep, such as the Ile de France and the South African Merino, to find DNA markers that could then be searched for in traditional breeds, but without much success.

Whether such work will be revisited will depend on interest from breeders and the wider industry, she says.

In the meantime, a good way to screen for naturally aseasonal or early-cycling ewes would be to run teasers with harnesses on with hoggets in spring and early summer.

Conversion to dairying in the mid-2000s of land deemed capable of supporting ewes lambing three times in two years is another reason there has been little commercial uptake of the concept, she believes.