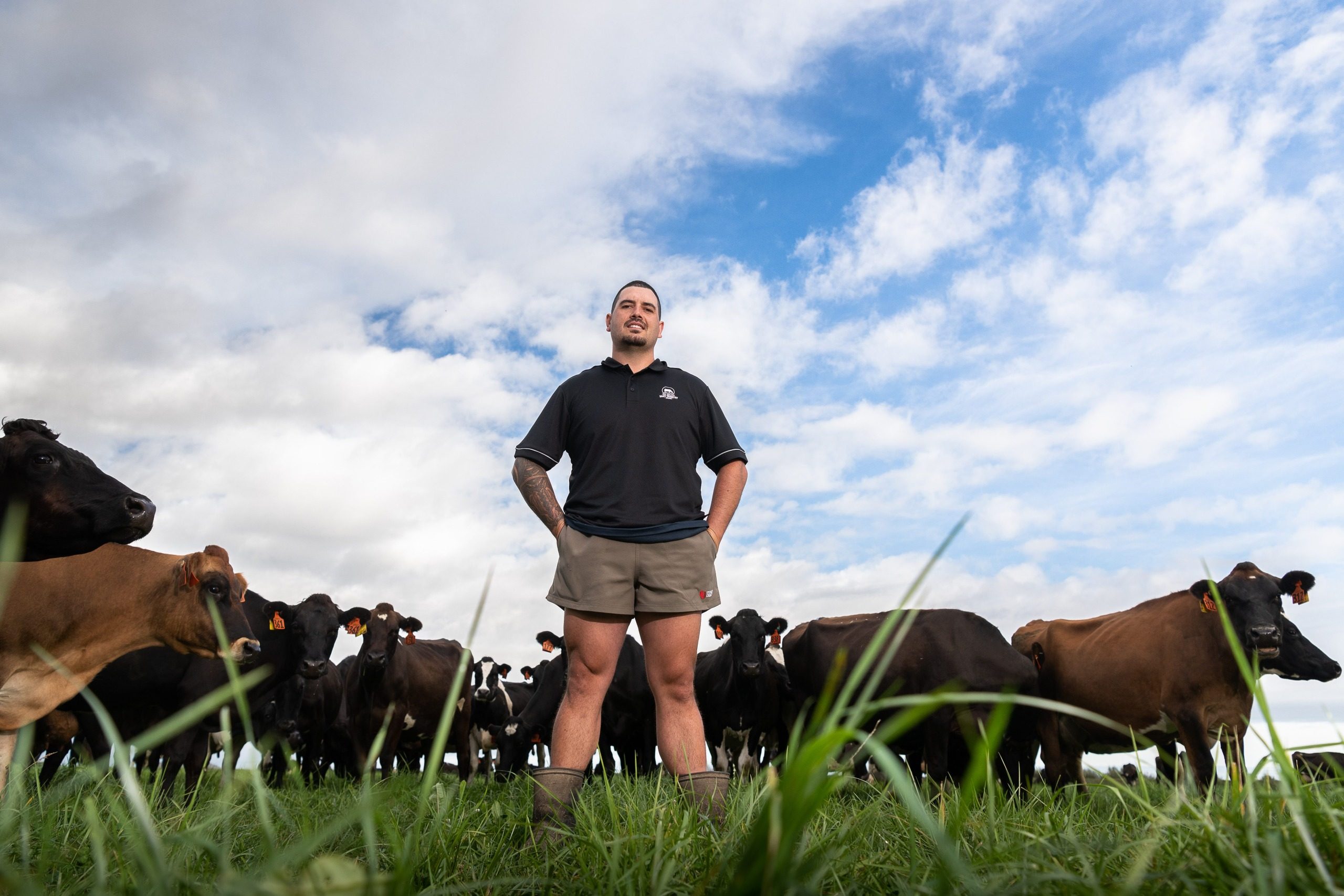 Joel Peterson sees his future in farm management and helping to pass on his knowledge and encourage other people coming through the dairy industry. Being able to manage and teach people is a big driver for the 30-year-old.

“To see them excel in what they do and see their confidence grow, and to take other opportunities on other farms is really rewarding for me.”

Joel is farm manager for Pāmu Farms on its 194-hectare, 520-cow property in Moutoa, near Foxton.

“I’m really passionate about dairy farming. I don’t think you’ll ever know everything, no day or year is the same.”

Joel grew up around Linton and Palmerston North where his Dad was in the army. He met his wife Latoya at high school and the couple have three children, Baxter, 13, Dante, 11, and Aria, 9.

While working in town, Latoya had a connection through a work colleague to a farmer wanting a worker at Tokomaru. Joel got the job as farm assistant milking 320 cows on the System 2 farm and never looked back.

“I was lucky that the lower order sharemilker had a lot of time to spend one-on-one with me over those two seasons and I was able to pick his brain.

“I fell in love with all the different array of what is under the umbrella of dairy farming.”

From that farm, Joel went and worked on a System 5 farm at Shannon milking 450 cows as 2IC.

“That farm was a wake-up call, it was out of my comfort zone in terms of day-to-day work. I had my biggest growth on that farm, there were plenty of opportunities to grow.”

Joel had started studying through Primary ITO in his second year farming and has now completed Level 2, 3 and 4.

During his year as 2IC he decided to enter the Manawatu Dairy Trainee competition, where he placed third.

The Dairy Industry Awards were the perfect platform to benchmark himself and get independent feedback on his farming skills and knowledge, he says.

From Shannon he was fortunate to be employed by Pāmu and spent a year as 3IC on their farm at Ruapehu milking 880 cows.

He moved to the Moutoa property as 2IC and then was promoted to farm manager in 2020.

He entered the Manawatu Dairy Manager last year and won two merit awards. This year he won four merit awards along with the title.

“It’s cool to benchmark yourself and you get good feedback. As an employee you have performance reviews, but it’s good to get that independent feedback from an outsider and a gauge of where you are excelling and what you need to improve on.”

The Moutoa farm sits on old swamp land and is surrounded by the Manawatu River so winter and spring can be challenging, Joel says.

Good winter management is key to the rest of the season. There are two stand off pads and a feed pad to be able to hold all of the cows.

“This farm grows good grass, about 13.5 tonnes drymatter (DM)/ha. Our goal is no hungry days and fully fed cows.”

Joel and his staff do a farm walk every Monday as well as a “tail end” pasture measure on Thursday for the next 10 paddocks in the round.

“That way we always have our finger on the pulse and always know what’s ahead for the cows to look after body condition score for the whole season. We always have one or two scenarios in front of us by checking the growth rates vs the feed demand and can fill the gaps appropriately.”

Joel also won the Fonterra Dairy Management Award which he says is really a team effort.

“Everyone looks after the shed and how we present it is how we feel about the farm. From hygiene through to tidiness. At the end of the day if someone came for a walk over the farm, there is nothing we wouldn’t want them to see.”

The technology in the farm dairy also helps Joel and his staff to have an extra edge for detail and be able to make sound decisions, he says.

The farm is in its first year transitioning into organic farming which is a new chapter that Joel is excited to be part of.

“When you leave conventional farming you get your toolbox emptied and you have to learn and pick up different practices and learn how to deal with challenges.

“The biggest thing for me is the Environmental footprint and the way people look at dairy farming, it makes me want to look after the farm, animals and people better.”

Joel manages three full time staff who are on a 5 on/2 off roster with each person either getting Friday and Saturday off or Sunday and Monday. That roster allows staff to spend time with family and friends and they come back to work refreshed and ready to move, Joel says.

During calving they have a 6 on/2 off roster which ensures there is always three people working every day. Joel is proud that he has facilitated a good team culture with strong staff retention.

“We offer an enjoyable work place with consistent rosters and a focus on the number of hours worked,” he says.

Knowing staff are happy and keen is a big win for Joel, as is seeing staff progress.

“For staff to do everything onfarm takes the pressure off and allows them to learn.

“My team, Toko, Cam and Rocky, have been with me for the last two seasons. Having a good team definitely helps with the things I do.”

Joel sees himself as a farm manager in the dairy industry for the next 20-odd years because the role offers such a great work/life balance and the opportunity to continue to work with young people coming through the industry.