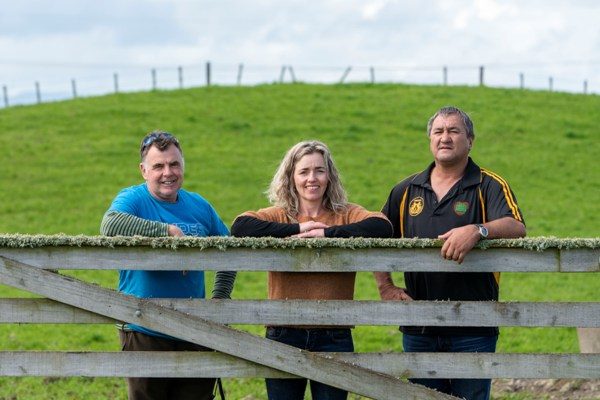 You’re only as good as your last season and Murray and Tracey Simpson are keen to match their previous 100% achievement in the Te Ara Miraka Farming Excellence Programme. Sheryl Haitana reports. Photos: Emma McCarthy.

Tracey Simpson was initially reluctant about the Te Ara Miraka Farming Excellence Programme when the Maori-owned dairy processor announced it five years ago.

The forecast milk price wasn’t healthy and Miraka were asking farmers to do more paperwork, including compulsory benchmarking, and to aim to meet high milk quality standards before they earned a potential extra $0.20/kg milksolids (MS).

“I thought it was putting too much pressure on farmers, and who were they to tell us about our contracts with staff?” Tracey says.

The new programme asked farmers to meet criteria around milk, cows, environment, people and prosperity, to earn points toward a total percentage that would determine how much of the incentive payment they received. Some of the requirements they were already doing, such as health and safety plans and contracts, but others like recording water use or an effluent warrant of fitness were new, Tracey says.

Miraka guided farmers through the process, and have altered the targets where necessary, she says.

For example the initial six-week in-calf rate requirement was 78% to get full points, which was too high, and it’s since reverted to 64% which is achievable for more farmers.

‘Cows are like humans, we wouldn’t like to eat nothing but Weetbix. Cows don’t just want ryegrass and clover, they want diversity.’

The hardest box to tick is being grade-free and to keep somatic cell count average under 100,000. Both can be gone in one mistake and your season is blown, Tracey’s husband Murray says.

“There is no room for error, it’s very intense, we live it every day.

“Anyone can make a mistake or the power could be cut and you can’t milk your cows.”

If there are situations that occur which are outside of the farmers’ control they can discuss it with Miraka. It’s good to know you can call milk supply general manager Grant Jackson and work through issues with him.

Today, for Tracey and Murray, Te Ara Miraka is not just a box-ticking exercise, it’s a philosophy and a standard they are passionate about.

While it’s a financial incentive, which is always good to get out of bed for, more than that, it’s a feel-good factor that they are doing the right thing by their cows, by the environment, by their staff and their own business, Murray says.

Having fellow farmers achieve such a high standard helps them know they are all in the same waka and have a great story and product to take to the market.

“There is no room for cowboys in Miraka. We have pride and we want to be successful for the reputation of Miraka.”

The Te Ara Miraka programme has created a paradigm shift, and made farmers look at their system from a different angle, Te Raparahi Lands Trust chairman Phillip Samuels says.

“We are lucky to have Murray and Tracey here at the coal face.”

Murray and Tracey have been sharemilking for the trust for nearly 14 years. They run three dairy platforms milking 900 cows, along with three small runoffs between Putaruru and Tokoroa.

Since the launch of Te Ara Miraka the three farms – which are run as one – have been in the top 10 of Miraka suppliers.

They calve all cows down on the Te Harore a Kapu farm, and then filter the cows out to the other milking platforms as the cow numbers increase.

This year they finished top for their Tokopuhi farm, getting 100% pass rate and the full $0.20/kg MS incentive payment, which is split 50/50 between the Trust and Murray and Tracey.

The couple achieved 95% for Papatangi and 85% at Te Harore a Kapu where they struggled with somatic cell count. Those results will earn them $0.19/kg MS and $0.17/kg MS on top of their milk price for those operations.

Murray, Tracey and Phillip have been on a journey over the last 10 years to have a more sustainable dairy operation, using more efficient fertiliser and homeopathy with the cows.

The trio consider themselves conventional dairy farmers, focused on production and profit, but they are even more passionate about their cows, the soil, the environment and the people in their business.

Tracey and Phillip attended a Neal Kinsey course and it changed the way they thought about soil and pasture.

They started doing herbage tests as well as soil tests and realised the minerals in the soil were locked up and not being absorbed by the plants and thus the cows weren’t getting them.

“If the plants aren’t taking it up the animals don’t benefit,” Tracey says.

They carried out a three-year fertiliser trial with Kiwi Fertiliser, Ballance Agri-Nutrients and Environmental Fertiliser. Although there wasn’t a lot of difference in results, Kiwi Fertiliser finished on top when it came to the level of service, Phillip says.

“We were pumping on the fert, we were being led that way.

“For us we aren’t interested in the biggest bang for a buck. We have a more holistic approach,” he says.

They started out by putting up to 2000kg/ha lime across the farms, then dropped back to 1100kg/ha on sidlings and 1400kg/ha on rest of the farm and have focused on building more diversity in their pastures.

Murray has been putting on chicory, plantain and red and white clover by helicopter on the sidlings for the last two years which is making significant inroads.

“Cows are like humans, we wouldn’t like to eat nothing but Weetbix. Cows don’t just want ryegrass and clover, they want diversity.”

In spring and autumn Murray puts on 46 tonnes of dolomite lime-based fertiliser with 2kg of chicory, plantain, red and white clover.

“We struggle to grow 9t DM/ha on the sidlings, that’s where we struggle. The pastures on the sidlings get hammered in summer and open up but the chicory hangs on. It’s a big cost and the trust has been very forthcoming to support it.”

“I don’t’ feed out for the sake of it, pasture is still number one for me. We are lucky to have the tools to use in the shoulders.”

Since they’ve started focusing on their soil and using homeopathy they’ve noticed a big improvement in animal health, Tracey says.

When they first came to the farms cows were going down left, right and centre during calving.

Tracey has used homeopathy over the herd for the last 20 years and earlier this year bought Homeopathic Farm Support Ltd from founder Tineke Verkade.

Murray and Tracy bought a 50% equity share in a 160-cow farm with the trust five years ago, but sold their share to buy Homeopathic Farm Support. They don’t have ambition to buy their own dairy farm. They are content to run a successful sharemilking business and build their equity and invest in other areas.

Tracey spends $120/cow on animal health on their farms, which is high, but they are focused on preventative rather than reactive animal health.

Murray is just as passionate about the cows and every day is motivated to ensure the cows are content.

“I live through my cows, if my cows are happy, I’m happy.”

Murray would like to drop their stocking rate from three cows/ha to 2.7. It’s a rare move for a sharemilker to drop cow numbers, but such is his belief in running a more sustainable operation and having content cows producing at their best.

The Trust installed Halo on all three dairy platforms last year, which Phillip says has pretty much paid for itself already.

Halo has a weather station on the three farms, which monitors rainfall, wind, soil moisture levels etc. Halo also has sensors to monitor vat temperature, the water tank and effluent pond levels, the rate the travelling irrigator is spreading effluent, including a GPS to track the irrigator’s course.

The $120,000+ investment has given them the ability to monitor the three farms at all times.

“We got the Maserati of the Halo system. It takes away 99% of the risk from human error,” Phillip says.

“We were always reactive. I hate being reactive, you’re always chasing your tail.

“Farmers can be blinkered and run with the hounds, I like to look outside for solutions,” he says.

With Halo they’re a step ahead. If there is a chiller issue they can ring Miraka to say don’t pick the milk up to avoid getting a grade.

Murray says the technology has given him new enthusiasm and takes the stress away somewhat.

“After 28 years of farming the weather still overwhelms me. The first thing I do when I get out of bed is check Halo,” he says.

The system has a phone app set up to send Murray alerts, for example if there is a water leak and water is draining out of a water tank faster than normal.

“I got an alert the other day and it turned out the cows had busted the ballcock. We could fix it before the tank completely drained.

“This gives us an edge.”

It gives Murray a safety measure, particularly when he is running multiple dairies and relying on staff because he can’t be in all places at all times, Tracey says.

Murray and Tracey employ five fulltime staff, with herd managers on the three farms. They have had staff nightmares in the past but their focus now is to pay staff well, treat them even better and set high expectations at the outset.

To achieve such high results with their Miraka programme across multiple farms with staff is a huge achievement, Murray says.

Their success is a result of an excellent relationship, with Phillip, Tracey, Murray and Agfirst consultant Mark Macintosh working together as a team. They have robust discussions about any new ideas, Phillip says.

“Our strength is our ability to make a decision quickly, to adapt and diversify.”