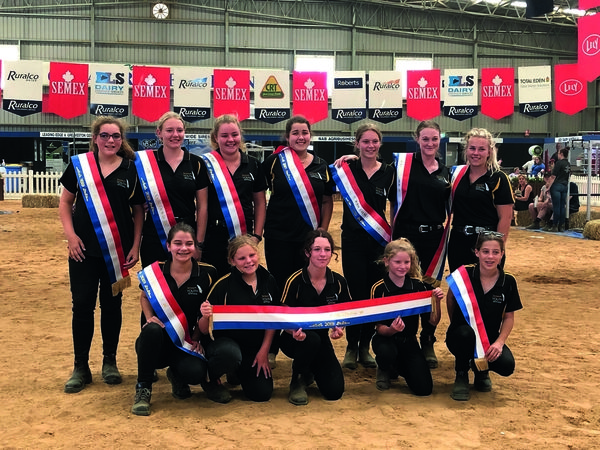 A New Zealand team of 12 girls aged between 11 and 19 came home winners of the overall championship after competing against 12 Australian teams in the Holstein Australia Victoria Youth Challenge Trials during International Dairy Week.

The NZ team of 10 was split into three groups: four were involved in clipping, three in leading, three in judging, and two were reserves.

The clipping and leading groups won their events and 16-year-old Zoe Botha, from the Waikato, won the individual clipping award.

“She is a very promising young fitter [somebody who would clip and prepare an animal for a show],” Jersey NZ general manager Pam Goodin said.

“Good fitters can move from show to show around the world and make a living from it.”

Julie Pirie, from Ngatea, a Jersey breeder and member of the Fonterra Shareholders Council, initiated NZ’s participation at International Dairy Week for the first time last year and persuaded Jersey NZ to become involved because it was mostly Jersey kids who wanted to take part.

“We lost points for not meeting the age-mix requirements for each event,” Goodin said.

“We knew that would happen, but we went for the experience. We learned how the show works and the differences from New Zealand competitions.”

Enough young people and parents showed interest in competing again this year and greater emphasis was put on getting the right age groups.

While Goodin deals with much of the administration, Pirie looks after the team and organises practices. “She is the glue that holds it all together”.

This year – knowing they had to field a team of 10 – they took all 12 young Jersey breeders who expressed their interest in taking part.

Most of the team, accompanied by five adults, were from the greater Waikato area.

International Dairy Week is held in Tatura, Victoria, every mid-January.

Exhibitors from the United States and United Arab Emirates were among the 156 exhibitors who put 710 head of cattle in the show ring throughout the week this year.

But competitors don’t work with their own cattle in the youth challenge.

They are drawn by lot to choose a heifer for clipping.

Part of the skill is in picking the right animal to clip within a time limit and the NZ girls were lucky to be drawn early in the process to make their choices.

The challenge is to enhance the heifer’s features for showing at its best for judging.

The clipping team established a routine before leaving NZ to decide who would be responsible for which parts of the animal.

They each took their own clippers, which raised biosecurity issues when they came home.

The group who competed in the leading event was allocated three heifers, which they had to look after – feeding, watering and so on – for 24 hours.

“It’s all about her behaviour in the ring and how she handles,” she said,

But whereas competitors in NZ are responsible only for themselves and their animals, in the Australian competition they must enter the ring as a team of three and walk around it three abreast. Among other considerations, the leaders’ ability to keep together as a team is judged.

“They put a lot of practise into this before the competition, because it wasn’t something they had experienced,” Goodin said.

For the judging event, four cattle were brought in to be ranked from first to fourth within 10 minutes. The rankings are scored against those of a senior judge.

One of the team must speak through a microphone to the judges and spectators to explain their decisions.

“A lot of people don’t cope well with speaking to hundreds of people through a microphone.”

Goodin said the youth challenge during the annual NZ Dairy Event in Fielding usually involves teams of four – one judges, one leads and all are involved in clipping. Unlike Australia, there is a general knowledge or dairy knowledge quiz.