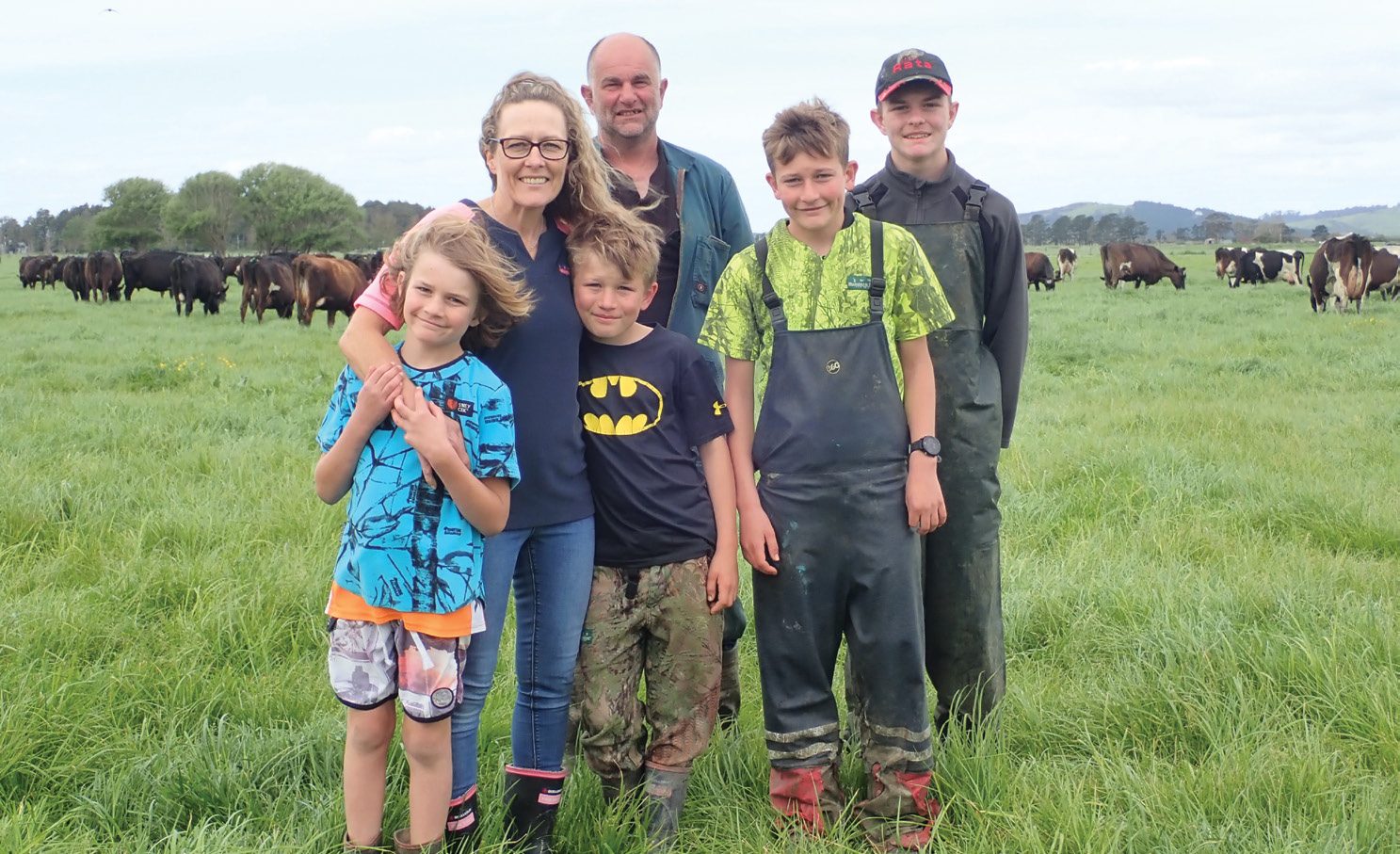 Sire proving on a Northland farm has stood the test of time. Story and photos by Karen Trebilcock.

When Rhys and Jo Watkins took on a 68-hectare dairy farm at Ruawai in Northland 10 years ago they continued many of the previous owners’ practices including sire proving.

The 200 cows are inseminated every year for five to six weeks with LIC Kiwicross sire-proven semen with some Hereford straws going in near the end before the Jersey bulls go out.

And with the herd’s BW at 173, they’re happy with the results.

“You get one or two every year that aren’t great but otherwise they’re good cows,” Rhys says.

The herd’s low empty rate, 8% last year, allows them to cull on production and other traits and anything with a temperament problem stands out on this farm where some of the cows can be ridden by the couple’s four children.

Ben, the eldest at 15 is not so keen but Matthew (13), Nate (10) and Jackson (8) are happiest among the cows and calves and all have their favourites.

Rhys had been a bike courier in Auckland and Jo was working at a bank when both decided they’d had enough of city life, especially for their young family.

Rhys’s brother Gary was already on a dairy farm at Ruawai and his dad was the DeLaval franchise holder in neighbouring Dargaville so Rhys spent a week with his brother and decided dairying was for them.

After two years on a farm at Whangarei Heads and another year at Te Kopuru, the family invested in the Ruawai property for them with Rhys and Jo buying in once they’d sold their Auckland house.

Jo now works as a teacher aid at Ruawai Primary School and is also on many of the community’s committees.

“We raise a few calves every year for the fire brigade and one for Ruawai Sports Clubs for fund raisers,” she says.

“I never was a farm chick. As a kid I used to visit my cousins who lived on South Island sheep and beef farms in the holidays but I never thought I’d be a farmer.”

Each year 50 sire proving heifers enter their herd with the planned start of calving July 1. Three months later the newbies are assessed by TOP (traits other than production) inspectors and weighed with Rhys and Jo putting down on paper what they think about them as well.

They have to rank each heifer from one to nine on adaptability to milking, shed temperament, milking speed and overall personal opinion.

It’s often a family affair with the kids remembering which heifer kicked who in the dairy.

The farm has a 38ha runoff nearby for the young stock, all on Ruawai’s flat, fertile soils, some of which are below sea level. Stop banks keep the Wairua’s tidal waters where they should be and the farm’s drains and flood gates are always well maintained just in case.

The crossbred cows suit the land well with Friesians often too heavy and the family think the Jerseys sulk in the rain.

But rain is welcome here because when it gets dry it stays dry and the past two years have been drier than normal.

By January Rhys and Jo have put the cows on 16-hour milking and then once-a-day before drying off on May 1.

Their best production so far has been 90,000kg milksolids (MS) but with the dry last year they were about 5000kg MS short. The farm is ryegrass and white clover with maize silage bought in plus they feed as much palm kernel as they can. They’ve had summer crops of turnips and chicory in the past but the dry has put a stop to that.

As well as benefiting from the cheaper price of AI with the Sire Proving Scheme, Jo says the requirement for records to be kept up-to-date makes sure they keep on top of things. The four herd tests a year give them good information for culling.

“It’s quite cool to be part of it. You’re getting better results not just for you but for other farmers in the future as well.”

DNA parentage testing of the heifer calves, paid for by LIC, not often done by the neighbouring farmers, make it easier at calving as well.

“So often a cow will take another cow’s calf when she hasn’t even calved herself.”

While Jo and Rhys are yet to have a bull calf selected by LIC, the farm’s previous owner Billy Salter, who started using sire proving in 1987, produced the bull Ice Age.

But for now the kids are content to play with the calves – the very calves that in two years’ time will be milking and showing which bulls are the best for the rest of the country to use.

Even though genomic selection is now playing a major part in finding the best breeding bulls, sire proving is not going to disappear anytime soon.

This year LIC celebrated 60 years of its Sire Proving Scheme which has between 180 and 200 herds spread across the country and farm systems.

To be eligible farmers must sign up for four years, have a stable herd of at least 200 cows, calve in spring, mate 90% of their cows to Sire Proving bulls, have four herd tests per year and keep full and accurate records. LIC general manager New Zealand markets Malcolm Ellis said sire proving allowed the bull’s genomic proof to be verified and measured.

Each spring about 1700 bull calves are genomically tested and from them about 200 are selected with 180 ultimately entering the Sire Proven team (75 Friesian, 35 Jersey, and 70 crossbred) as one-year-olds. They’re grazed at LIC’s bull farms at Newstead and Awahuri and their semen is collected for daily despatch throughout mating. A small amount of frozen semen from selected bulls is also used for LIC contract matings and is also available for limited nominated sales.

For the following three years about a third are used as genomically selected bulls by LIC.

“They are the very best of them, the cream of them, chosen through genomics,” he said.

By age five, the bull’s first daughters on sire-proving farms are milking and can be assessed for production and TOP (traits other than production) which include temperament and milking speed.

It is then about the top 20 who make the grade to go in the daughter-proven teams, with the very best seeing a number of years of service. Malcolm says selecting the bulls on their genomic value, instead of waiting to see how their daughters are milking, is accelerating the rate of genetic gain in the national herd.

“It shows our co-operative’s $78 million, 25-year investment into genomics research is paying off for the New Zealand dairy farmer.”

“Last year, 43% of all inseminations carried out by LIC were completed by genomically selected bulls. This year it will be 53% which is a massive increase and will positively impact genetic gain at a national level.

“Sire proving continues to give us confidence in our genomic testing by verifying the genetic potential of these animals.

“We’re very thankful for the commitment and dedication of the farmers in our Sire Proving Scheme.”