Advice and top tips from farmers, farm consultants and scientists involved in the Meeting a Sustainable Future project have contributed to getting fertiliser rates down to meet new national freshwater nitrogen caps. Anne Lee reports.

High users of nitrogen fertiliser are being urged to start lowering nitrogen rates this season to try and reduce the potential for dramatic impacts on their farm systems when new national freshwater nitrogen cap rules come in.

The 190kg N/ha/year cap on nitrogen fertiliser application for each hectare on the farm will begin in July next year under the Labour Government’s new rules.

Farmers will have to report their synthetic fertiliser nitrogen use to their regional councils.

Canterbury farmers are likely to be hardest hit by the new input rule which had not been signalled in last year’s proposed policy statements that drew record numbers of farmer submissions.

The average for the past 12 years reported for Canterbury farms in DairyBase was 226kg N/ha effective.

The figures are backed up by data from farms involved in the Meeting a Sustainable Future Project where farmers are partnering with DairyNZ to work together on solutions to reduce nitrogen losses and implement practical solutions borne from research studies including the Forages for Reduce Nitrate Leaching study.

Partner farmers averaged application rates of 218kg N/ha for the latest year end which was down 11% on the groups average of 244kg N/ha over the 2009-2013 baseline period.

An established consultancy firm in Canterbury reported its clients averaged 235kg N/ha for the 2019/20 season with several clients applying more than 300kg N/ha.

Despite those response rates though the relationship between nitrogen fertiliser and profit is low according to DairyBase data analysis.

Much of the focus of research and farmer projects has been on the major culprit driving nitrogen loss onfarm – nitrogen deposited at high rates in the urine patches from cows.

Managing irrigation to limit drainage also has a significant impact on helping keep losses down.

Virginia says discussions with farmers in the Meeting a Sustainable Future project held following the announcement of the 190kg N/ha/year cap have drawn out advice and top tips from farmers, farm consultants and scientists on how to get rates down.

Several farmers in the project group have successfully dropped nitrogen fertiliser use from more than 300kg N/ha/year to 200-230kg N/ha/year but the transition has taken two to three years.
A successful transition takes time and its best to do it gradually, she says.

“It’s important that clover has time to re-establish and the additional nitrogen fixed - from increased clover growth - is available to the grass, to compensate for the lower nitrogen from fertiliser.

“So farmers using high rates will need to start now if they want to get rates down to the target next season,” she says. 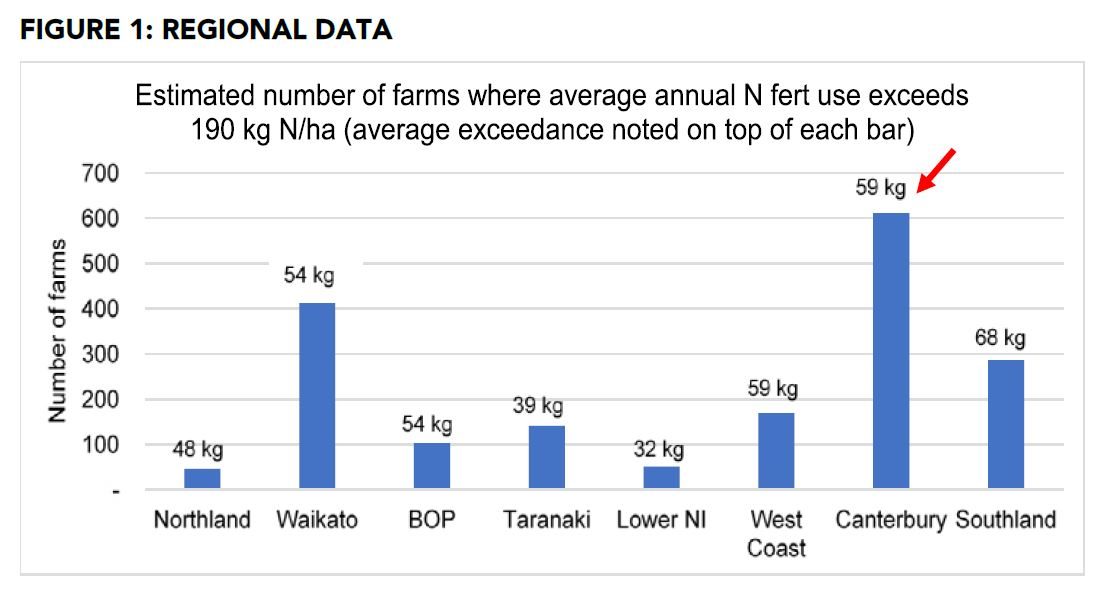 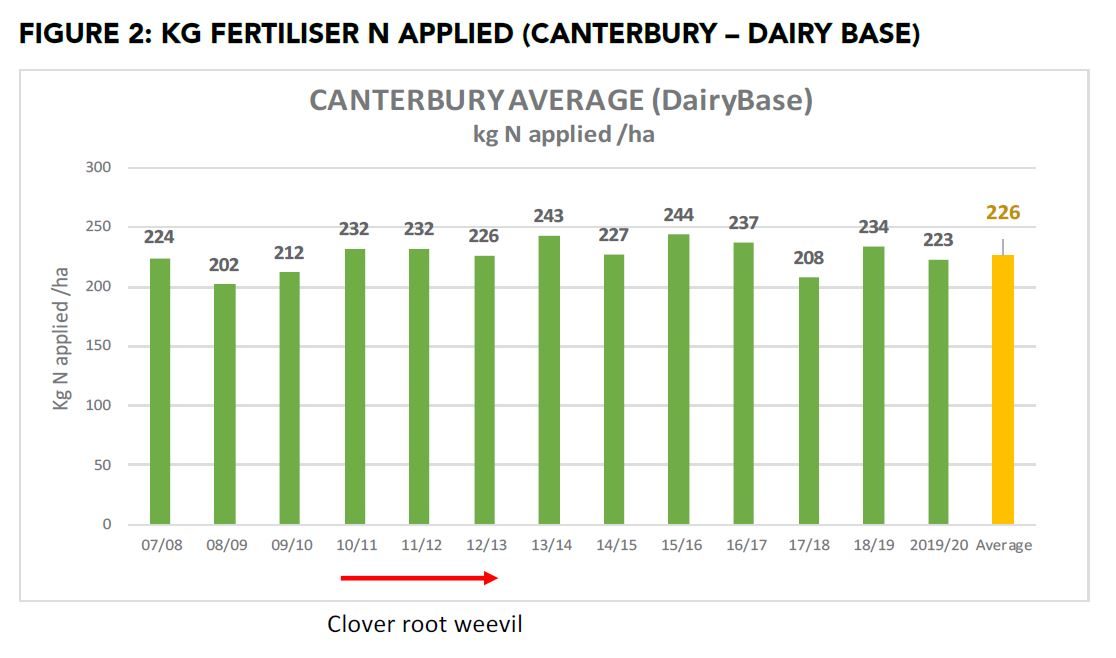 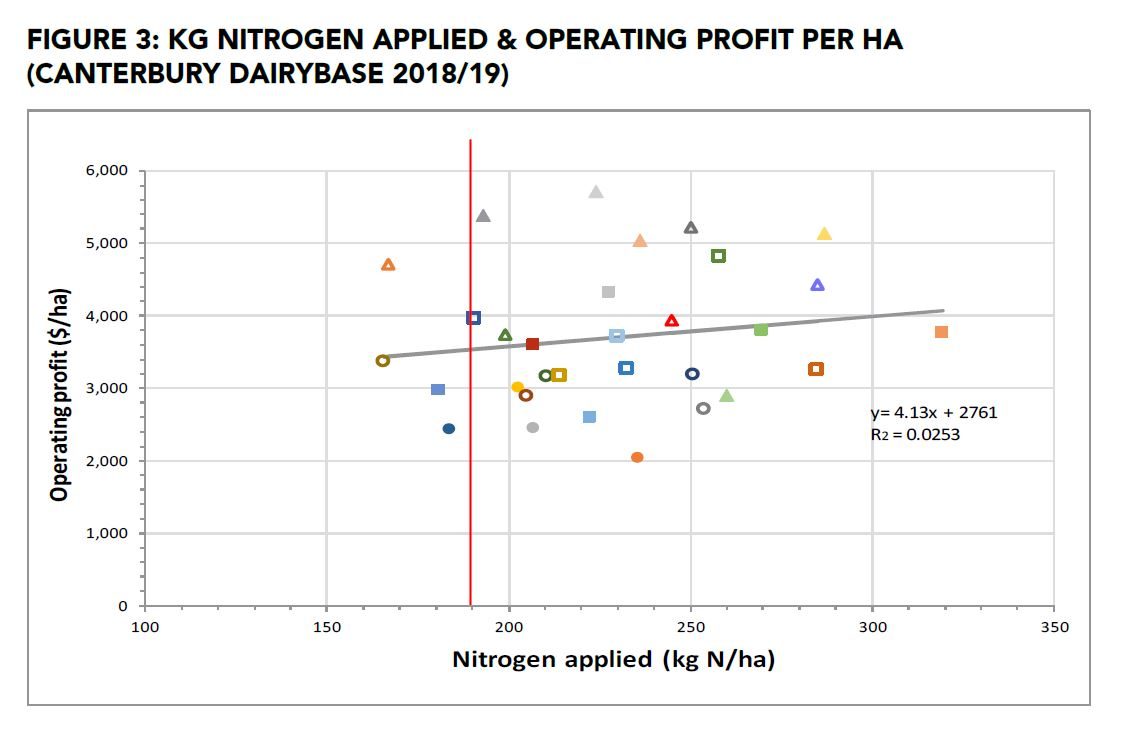 One of the places reductions can be made is the effluent area.

Data from the partner farms shows that when nitrogen from effluent is accounted for, applying nitrogen fertiliser is likely to push the total nitrogen applied to the area well beyond what’s being used on the rest of the farm. (Figure 1.)

The aim should be for total nitrogen applied on the effluent area (N from effluent plus N from fertiliser) to be at the same rate as the rest of the farm.

Achieving that in reality can be difficult though with nitrogen levels in stored effluent varying.

Samples can be tested through the year to help decision making but it’s an area identified as needing more research.

Following the cows with nitrogen is a simple and commonly used fertiliser application strategy but it can lead to more nitrogen being applied than required particularly when grazing rounds are sped up through high growth periods.

If grazing rounds are at 18-19 days, ryegrass is likely to be grazed before the 2.5 leaf stage rather than between the 2.5 to three leaf stage where the greatest drymatter accumulation takes place.

Slowing the round to time grazings to be between the 2.5 and three-leaf stage will maximise pasture yield.

Don’t go beyond the three leaf stage because that’s going to shade out clover.

Slowing the round may reduce the total number of grazing rounds for the season without compromising feed intakes.

That could mean an immediate 25-40kg N/ha reduction on its own depending on what the rates would have been for the dressings that get dropped out.

Some farmers have moved to timing applications once or twice a month rather than after grazing, Virginia says.

While that helps simplify reductions it can mean some nitrogen efficiency is compromised as some pasture will be in the middle of its regrowth cycle when the nitrogen is applied and will be grazed before the maximum response is achieved.

DairyNZ principal scientist Dr Ina Pinxterhuis says pasture height should be above 3.5cm or 1500kg drymatter (DM)/ha to get a response from nitrogen fertiliser.

The pasture won’t respond until four days after application so it can be grazed until then without reducing the growth response.

From four days onwards the uptake of nitrogen is rapid if growth conditions are good but that won’t be reflected in the DM yield until 14 days after application.

That means the nitrogen content in the pasture from four to 14 days is higher, increasing the likely urinary N loss if grazed then.

It takes 20 days in spring and up to 40 days in the autumn to get a significant yield response to N fertiliser so grazing before then means you’re not getting the full benefit of the fertiliser.

Pasture growth is limited when soil temperatures are below 6C and above 16C so applying nitrogen then won’t get a growth response. Typically 1kgN/ha/days of round length is used to determine the application rate at each dressing but cutting that to 0.8kg could be considered.

That too could mean a reduction of 4-8kg/ha at each application depending on original rates which would also add up to a significant reduction over the whole season.

Some farmers have delayed their first nitrogen application until September instead of applying it as soon as soil temperatures go above 7deg C which is usually mid-August.

Most make their last applications mid-April.

No applications in January and February during periods of peak clover growth has been a strategy tried by several partner farmers but it’s had mixed results with some farmers facing a feed deficit in March. It’s important to have a plan but it must be monitored and adjusted during the season in response to weather conditions, Virginia says.

Clover needs higher levels of phosphorus (P) sulphur (S) and potassium (K) than ryegrass and needs magnesium (Mg) and molybdenum (Mo). It grows best at a soil pH of 5.8-6.2.

It can be oversown now. Check out last month’s issue for tips on growing and establishing clover (Dairy Exporter September 2020, pages 56,57).

The 190kg N/ha/year cap is the maximum application averaged across (pastoral) land on a farm.

Importantly, it is also the maximum application on any hectare of pasture (area not used to grow annual forage crops).

It is possible to put more than 190kg N/ha/year on forage crops but only if offset by applying lower amounts on pasture.

The nitrogen cap applies to a “contiguous land holding”. This is “one or more parcels of land within a farm”. So, if there is a support block contiguous (joined) with the milking platform, it is all subject to the same N-cap. If the support block is separate, both blocks must independently meet the N-cap.

Farmers that exceed the N cap will need to apply for a resource consent. 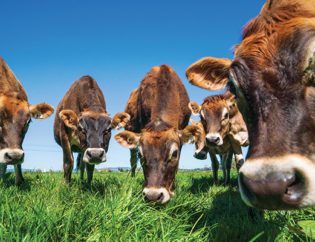 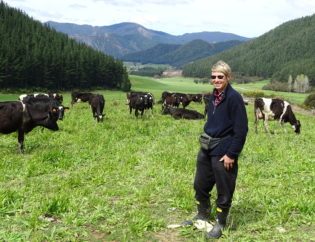 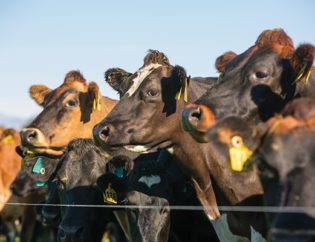 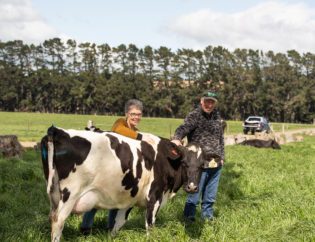