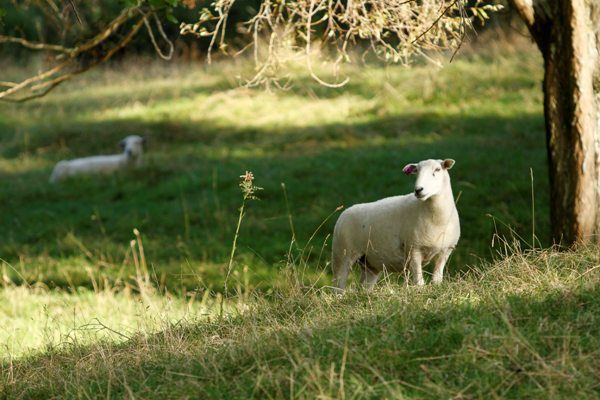 Scientist and analyst Nicola Dennis is also a farmer, with a feisty Wiltshire flock. She takes a slightly tongue-in-cheek look at the advantages and disadvantages of Wiltshire genetics in the flock, from wool shedding to lambing numbers to fence-leaping.

I have written before about how much we love our shedding sheep. We love our Wiltshires from a distance because they never really need any hands-on work. Wiltshires don’t need shearing, dagging or tailing.

Our Wiltshires were “bred up” from minimally shepherded Perendales by the previous occupants of our land. They stag leap over fences at the very sight of us. Because of this, we have also discovered that we can forgo drenching and almost all other forms of handling. From my window, I can see the ewes roaming over the hills in the distance with troupes of energetic lambs bouncing behind them. That is about as close as I will get until it is time to draft the lambs for their big OE.

Our sheep grow about 2cm of wool for the whole year and shed it when it pleases them. On occasion, a sunbathing ewe will deposit a large chunk of fleece that looks like a dead lamb, just to check we are paying attention. But mostly, the wool just dissipates somewhere without too much ceremony. I expect that birds pick it up for their nests, but that might be a bit romantic of me.

Anyway, coarse wool is for the birds, isn’t it? Fine wool is dominating the apparel market. All the best humans are decked out with merino innerwear, outerwear and shoes. Synthetic fibres have firmly cornered carpeting. Thanks to exuberant marketing, small children are now convinced that carpets are made from rhinoceroses.

That leaves coarse wool sniffing around for drapes and oil spills. Maybe woollen surfboards or some other new innovation can brighten the prospects for coarse wool. But at this rate, shearing coarse wool is basically an animal health treatment rather than a money-making venture.

Perhaps you are wondering how much work it would be to switch to a self-shearing sheep? Almost no work at all, if you are prepared to hunt out some ewes or hoggets from a reputable breeder. These days there are actually quite a few breeders to choose from and the prices are no longer eye-watering relative to other breeds (or, I should say now that all ewe prices are ewe-watering).

If you are a little more budget-conscious or you already have a very nice flock of sheep, then you may like to breed the shedding trait into your existing flock.

The good news for those wishing to take this approach is that shedding is a dominant trait. This means you only need one copy of the gene to get shedding. If you were to source some Wiltshire rams for your current flock, the lamb crop should all show some shedding.

Due to the sprightliness of our sheep and the lack of integrity in the boundary fence that separates them from our neighbour’s Romneys, I can attest that the first cross is pretty bloody obvious.

The bad news is that the genetics behind the amount of shedding is a bit of a crapshoot. Our neighbour’s mongrels look more like bald eagles and less like the sleek white land lice that brought them into existence. Getting some shedding is easy, but getting 100% shedding requires some dedication.

The wool disappears from the head, legs and belly first. After a few generations, some sheep will still have a “saddle” of wool in the middle of their back. When we inherited our sheep seven years ago, there were more than a few saddle sheep that we ruthlessly culled. Now all our ewes shed 100% without question. Some of the lambs retain saddles, but it is difficult to tell if this is due to an impurity in the genetics or influenced by the Romneys next door. There is also a liveweight effect on shedding (the heaviest lambs shed first and more completely) so it may be that the saddle lambs would have shed if only the truck had arrived a little later. Our processor graciously gives us ‘A’s for presentation even though some of our lambs resemble turtles.

So, if you do not mind a bit of graft, let’s explore how long this whole breeding up to shedding flock is going to take. Most breed societies consider an animal to have “graded up” when it is 7/8ths or 15/16ths “pure” – in other words, after three or four generations of breeding to the new breed. There is a breed society for the horned Wiltshire breed. Given the temperament of the polled flock, I can only imagine the horned Wiltshire society is run by the military. The Wiltshire Horn society had no information on “grading up”.

Let’s just guess that, with a good breeder, the third generation crossbred ewe will not need shearing. If you routinely cull your ewes at, say, six years old. Then after six generations of using Wiltshire rams, all the ewes will have some degree of shedding. At this point, you would probably be able to seriously scale back the tailing and dagging in the lamb crop because all your lambs would be at least 75% Wiltshire. After culling the first crop of 50% Wiltshire ewes, the lamb crop will all be at least 87.5% Wiltshire (the magic 7/8ths) which for the purposes of this exercise we will call purebred. Once the last of the 75% Wiltshires have been culled (in the seventh or eighth year if you have good lambing rate in your hoggets) you would be able to hang up your handpieces.

Aside from temperament (which Wiltshire fanatics are quick to rebrand as “hardiness”) and the lack of wool, there isn’t much to lose from dabbling in shedding genetics. Wiltshires are pretty tidy on most traits. There is a small negative genetic correlation with fleece weight and fertility. That means selecting for heavier fleece weight often results in less fertile ewes. So, if you are switching from a heavy fleece breed, the Wiltshire may boost the number of lambs born. A crossbreeding exercise in the 1990s showed that adding Wiltshire to the mix, improved the lambing percentage of merino ewes (adding an extra 0.33 lambs per ewe). On that note, we have never heard of a Wiltshire ewe prolapsing a bearing.

Wiltshire breeders like to claim shedding sheep are more efficient because they do not waste energy on wool production. And, because they spend most of their lives naked, they are not prone to heat stress, fly strike or becoming cast.

I was not able to find any scientific evidence to confirm or deny the efficiency claim. But, an Australian paper from the 1980s pitted the Wiltshire horn against the Suffolk in a test of who was the better terminal sire. The carcasses from the Wiltshire horn lambs were 3kg lighter in the trial but had a larger eye muscle area. The researchers concluded that the Wiltshire may be a superior lean meat producer. They also note “The Wiltshire Horn is probably a relatively unselected sheep, as it resembles wild sheep in appearance and behaviour”.

In the 39 years since that paper was published, that statement is still fairly accurate. Our sheep don’t look particularly wild or different. Kudos to the agent who requested the phone number of the guy who shears our “Texels”. But, I will admit they are wild. So, if you have a flock of docile, fence-abiding ewes, I invite you to add your genetics to the Wiltshire pedigree!