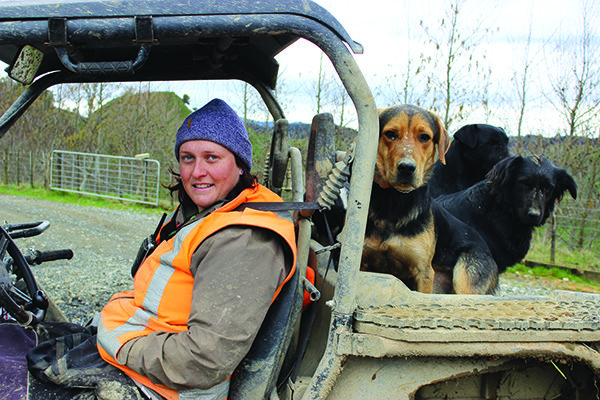 It took a while for Anita Kendrick to adjust to life without the use of her legs.

But the King Country shepherd hasn’t let her disability keep her away from the job and the lifestyle she loves.
Anita broke her back in a quad bike accident in 2011, when she was 18. She was mustering when the bike flipped and rolled over her.

“I was saving to buy a western saddle for my horse. I remember lying there and thinking I’d broken my ribs. But when the air ambulance crew and my Dad arrived I could see by the look on their faces that my injury was much more serious.”

The first two years were particularly tough for someone with their heart set on a farming career. Passionate about horses and dogs, Anita had always wanted to be a shepherd. She was raised on King Country sheep and beef farms owned by parents, Bob and Robyn.

She got a lot of support from farming friends and family after the accident. Mickey MacDonald, manager of Pamu’s (Landcorp) Te Wharua Station, where she has worked for the last nine years, told her there was a job waiting if she wanted it. Anita says the first two years after the accident were the toughest both mentally and physically.

But with the help of others, including brothers Scott and Cameron, she developed innovative ways to get back to full-time shepherding. ACC helped out by providing her with equipment like a modified side-by-side ATV.

“I’ve learnt how to be more patient with myself. I still find it frustrating when I’m working with someone and I know they need help with a job but I physically can’t help them. I’m also extremely independent, so I’ve had to learn to ask for help when I need it.”

When it comes to jobs like mustering, she is as capable as anyone.

“She’s great with stock and she’s got the best team of dogs on the farm,” says Mickey MacDonald.

Anita splits her time between Te Wharua Station and Murray Gemmell’s farm, both north of Taumarunui.

“I’m lucky to have two great bosses and the variety that comes with working on two different farms.”

Anita runs a team of nine dogs, most of which she bred herself. She can trace the ancestry of her dogs back to their grandparents or great grandparents and has got pretty good at spotting pups with potential and training them up.

“A friend of mine at Whangamomona taught me a lot about training dogs. But there is still a lot of trial and error involved.”

A good working dog, she says, is strong and stocky and easy to teach.

“They’ve got to have a brain but they can’t be so clever that they think they know best.”

Loyalty is a common trait that all dogs share, and Anita says it’s what she likes most about them. “They’ll always love you, even when you’re cross with them.”

With her modified ATV and a team of well-trained dogs Anita performs a range of stock work.

“My dogs have effectively become my legs.”

She also does other farm jobs, such as weed wiping and pasture measuring.

Now in her late 20’s, Anita says she has well and truly come to terms with her injury.

“I’m probably the happiest I’ve ever been.”

Her next challenge is to find work on a South Island farm.

“I love the King Country but I also love the South Island and I try to get down there every year.”

A job on a South Island stud farm would suit her perfectly, though she admits it might be hard finding work in an area where people don’t know her.

“Some farmers will look at my wheelchair and think ‘what can she do’? But hopefully I will find a positive, open-minded employer who will give me a chance to show what I’m capable of.”

Outside farming, Anita has a range of hobbies to keep her occupied, including running a Border Collie breeding business with her Mum. She also tries to keep fit.

“That can be a real challenge when your mobility is limited, so I’ve got a gym set up at home and I also get to boxing classes in Taumarunui when I can. I don’t drink alcohol anymore, and that’s helped me stay healthier.”

Occasionally she gets envious watching her co-workers perform certain tasks on the farm.
“Funnily enough, the job I miss most is dagging. It brought out the competitive spirit in me and I used to love getting in there and dagging as many as I could!”