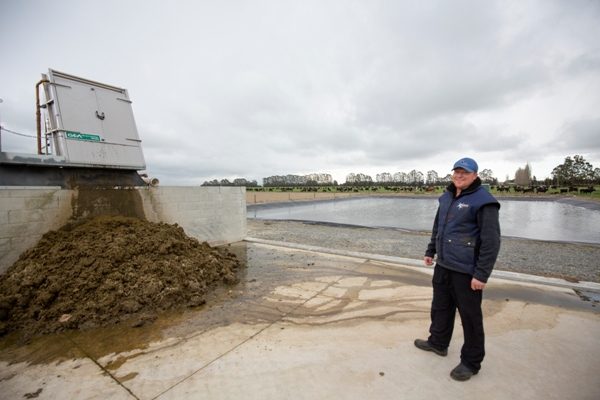 Reliability was at the top of the list when engineer Paul Busby started planning for a new effluent system on his 750-cow farm Dromore Downs just north of Ashburton.

As both a mechanical and electrical engineer you might think he’d be swayed by the most complex, but simplicity was a key too, along with low labour intensity and environmental sustainability.

Paul’s owned the 215-hectare property for the past five years although manager Steve Leckie has worked on the farm – on and off – for the past 15 years.

Steve’s seen it develop over the years but the most dramatic changes have occurred in the past two seasons as the piping of the Ashburton Lyndhurst irrigation scheme brought with it an end to the flooding borderdyke irrigation.

But the pressurised water didn’t just arrive at the farm boundary – the property was right in the path of the piping network so during the winter of 2017 paddocks were ripped up and fences ripped out.

At the same time work got under way to essentially reconvert the farm.

It allowed for a complete redesign of the farm layout with the farm dairy and yard and housing the only things to stay where they were.

With a simple rectangular outer boundary the laneways were re-laid out and paddocks re-fenced.

The borderdyke head races were filled in and borders, that ran the length of paddocks, recontoured.

The piping of the irrigation scheme down the plains gives enough pressure to run the pivots with no pumping costs.

“We thought about putting off the effluent upgrade until the payout recovered a bit but in the end we took the decision to do it all at once,” he says.

The farm had relied on a travelling irrigator with a long, very narrow pond for storage.

A bucket test showed the travelling irrigator applied effluent at a 13mm application depth – within its consented limit of 15mm.

But it was labour-intensive, having to be set up for two different runs each day.

Paul wanted to make use of the pivots in any new effluent system given their ability to apply low rates of effluent to a large area of the farm simply and effectively.

“We decided to go with a two-pond system and a separator so we could reliably put the effluent out through the pivot itself.

“If we’d gone for a different pond system we would have had to under-sling it along the pivot in a separate line and I wasn’t convinced about the level of reliability.”

Effluent from the farm dairy and yard flows to a concreted stone trap then into a sump with a stirrer which runs during milking.

It’s then pumped to a slope screen that’s positioned about three metres above a large concreted bunker.

Paul says he went with a slope screen rather than a mechanical screw press or vibrating screen for simplicity and lack of moving parts.

The effluent simply flows down over the screen positioned at a 70-degree angle to the vertical.

The solid portion of the effluent slides over the front of the screen and drops down on to the bunker while the liquid filters through behind and is directed into an adjacent polyethylene-lined sediment pond for further settling.

Every 10 minutes water sprays down over the front of the screen for about a minute to clear the screen and move the effluent along.

A pipe at the top of the pond then decants the green water from the top of the sediment pond into a large 30- day, polyethylene-lined storage pond sized for 800 cows.

Steve says that from there it can be pumped from the pond, injected into the pivots and spread over much of the farm.

The pivots have variable-rate irrigation installed which means the spray nozzles are managed by software that allows them to be programmed so they pulse on and off to give varying rates of water application.

They can also be programmed to shut off as they pass over lanes, troughs or any areas where irrigation isn’t required such as when a paddock has been sprayed out for regrassing.

Steve has several plans he can run the pivots to – various plans have different application rates that are just for irrigation and one that’s specifically for effluent.

When running on the effluent plan the nozzles shut down in the same areas as the irrigation plan, such as laneways and a softer area where the old borderdyke headland was, but it also shuts off to give the required setbacks from boundaries.

Paul says the effluent makes up just 10% of the 10mm application depth when the effluent plan is running so only 1mm of the total is greenwater.

They’re now entering their third season with the new system which has lived up to Paul’s reliability hopes with no blocked nozzles on the pivots or issues with the screen.

Steve says they run water only through the pivots at the start of each effluent irrigation and again at the end which may have helped ensure no blockages and any corrosion.

A water budget is run to ensure soil moisture is at a level that will allow effluent irrigation.

From both an environmental and management perspective the new system is a massive change creating wins for both.

The effluent system, how it’s managed, monitored and maintained form a critical part of the programme.

Lead with Pride manager Mark Wren says the effluent system and it’s management sit within the environmental pillar of the comprehensive programme which rewards Gold Plus farms with up to 20c/kg milksolids (MS) additional payment and Gold Elite farms with up to 25c/ kg MS.

He says the company’s third-party auditors need to have a high level of confidence the farm team is managing the system so best practice outcomes are met.

“They’ll be checking to see the effluent system itself meets certain requirements such as having a DairyNZ warrant of fitness, the system has a fail-safe fitted, there’s sufficient storage but they’ll also be looking to see that the system is being managed well.”

That means proving staff have good training in using, monitoring and maintaining the system with someone needing to have a Primary ITO effluent management certificate.

The farm will need standard operating procedures for the effluent system and staff will need to be able to show they understand what’s in it – how the system is operated, that setbacks are observed and that resource consent conditions are complied with.

They’ll need to be able to show how decisions are made around when the system should be started up, when it should be stopped and importantly what they do if something goes wrong.

They’ll have to show how they measure soil moisture so they can prove effluent is applied at appropriate times.

Records of maintenance will need to be sighted along with proof of placement records.

Mark says as with other aspects of Lead with Pride the effluent requirements are not about setting minimum standards.

“They’re about achieving good outcomes – in this case for the environment, protecting water quality but also ensuring effluent can be used as a resource.”

He says the programme was the first farm assurance programme certified under the international ISO/IEC 17065 standard and was developed in collaboration with farmers.

But the standards and expectations aren’t static so there is a continuous improvement element.

As part of ISO accreditation a standards group, which includes farmers, third-party auditors of the programme Asure Quality and Synlait staff, meets to review the standards, ensure they’re still set where they should be and look at what might be coming over the horizon.

Mark says the bar has definitely lifted since its inception in 2013 and issues such as climate change are now being discussed.

The four pillars the programme is based on include environment, animal health and welfare, milk quality and social responsibility – which includes people management.

One of the benefits of the programme is that many of the recording and compliance aspects also meet the requirements of regulators with most of the information stored on a bespoke FarmIQ system developed for the programme called Lead with Pride Live.

Mark says there are 93 suppliers certified and he’s expecting another 50-60 farms to be certified this season.

All the company’s North Island suppliers must become Lead with Pride accredited within three years as part of their supply contract.