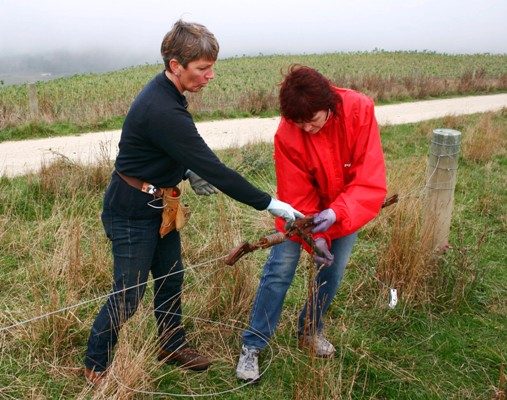 The work of women in rural New Zealand is often under-valued, especially by the women themselves. Lynda Gray talked to Rural Women New Zealand president Fiona Gower about how rural life has changed over the years.

She hears the one-liner all too frequently, more often than not from highly capable women who multi-task several roles as a rural-based wife and mother.

“They’re almost apologetic and it’s language we’d like to change, and I think telling more stories about how rural women are making a difference is what will make the difference. If it wasn’t for us so much wouldn’t get done … we’re the glue of the community.”

The many capable and talented women who live rurally, and the role that they play in the running of many farming businesses is increasing. But the ‘farmer’s wife’ label lingers and with it the subservient connotations. Some women aren’t overly concerned but Gower thinks it feeds the reality of many who are underpaid (if paid at all) and undervalued within the farming business they’re part of. Another factor influencing their self-worth is social isolation.

“One of the reasons that RWNZ was formed in 1925 was to support geographically isolated women who lived at the end of dirt roads, with no phone or power, but now for us the big issue is social isolation.”

The solution to this problem is to improve “connectivity” which RWNZ is working hard to address by improving access to health, help and support services.

Further insight into the loneliness experienced was captured in a 2016 Kellogg report by Nadine Porter. It looked at possible ways of better supporting rural women who often felt exhausted, stressed, guilt-ridden and socially removed in their community because of the family-farming-work juggling treadmill.

The report was critical of pervading educational policy that placed more pressure on parents to volunteer, fundraise and keep small schools afloat.

“The majority of rural schools offer little to nothing in the way of after-school childcare despite evidence that many rural women were now earning off farm, with many working mums reporting feeling ‘excluded’ and ‘ostracised’ because many school events were held during working hours which they could not attend.”

The women interviewed said that social media had become their life-line and for some the only social interaction with the world beyond the farm gate. The report said that advocate farming groups needed a greater understanding on the “modern social space” of women, and should lobby for improved internet access.

“This is the main way in which the modern rural woman socially engages with her peers. Without that connectivity she is at risk of further isolating and excluding herself from the wider rural community and that in turn could lead to deteriorating mental health.”

The report also recommended better access to after school childcare so that women could pursue careers and personal growth; and recognition and remuneration by farm employers of the skillsets offered by women who lived with employees.

Women often find themselves at a crossroads when they marry a farmer and move to a rural location. Some, highly qualified in their vocation, juggle travel, childcare and the demands of a farming life around their career. Others reassess their options and start out in a new direction, which is what Gower did when she started a family. She joined RWNZ and started “engaging her brain in the community space” because it was too far to travel and expensive to employ childcare to continue work in the rural retail sector.

She said other women honed their skills and developed new businesses, some farming related. These often exceptional efforts are recognised in the RWNZ Business Awards.

The Agricultural Women’s Development Trust has helped women step up and take a greater role in farming businesses. Since its formation in 2009 AWDT has worked with 3000 women in primary industries to build their skills and confidence.

But not all rural women are interested in farm-related professional development or groups, and Porter’s report says more effort needs to be made in making available “transformative learning” opportunities.

The report said those who categorised themselves as being ‘happy’ utilised skills they had in a former career and were being paid for them.

The turning point for the role of the farmer’s wife was the rollout of Rogernomics by Minister of Finance Roger Douglas following Labour’s landslide victory in 1984. His market-led economic reforms caused havoc across farming communities, especially with the scrapping in quick succession of the many subsidies and incentives that had propped up the sector. Farming families were pushed to the brink and for many the only way to survive was for one partner, often the wife, to get off-farm employment to service farm debt. Rural women were forced into overdrive as they tried to keep up with the usual farming household chores as well as work off-farm. Their attention was focussed on keeping the home and family intact, and as a consequence participation in groups such as WDFF, CWI and playgroups fell by the wayside, leading to wider disconnect. Although an overly dramatic summation of rural community transformation over the last 30 years, the point is these economic-driven changes greatly altered the role of women. Now it’s the norm, rather than the exception, for women to work off-farm as highlighted in Porter’s report, which estimated that almost 90% of farming mothers worked 21 hours or more, and 26% 40 hours or more.

Regardless of the title and perception of a ‘farmer’s wife’ most farm-based females play a significant role in financial and marketing decisions, according to a survey of 250 women by agribusiness rural marketing specialists Tracta. In the survey 26% said they had no specific on-farm role, but most said they were involved in buying decisions. More than half of the respondents were totally responsible for all bill payments, but only 35% felt they were understood and respected by rural product and service markers.

Although the survey was conducted in 2013 Tracta director Andy Walker suspects the results would be similar today.

“Women are very influential, and so they should be since they’re heavily invested on a number of levels. And of course their influence differs according to the role they play.”

The bigger and more extraordinary the investment the more it is likely to be a joint decision as all parties are affected, he says.

“Simply put, to fail to identify the importance of the woman, as many companies do, is setting yourself up to fail. If either the husband or wife/partner dislikes either you, your company or product, then it’s goodnight.”