The work of AgResearch scientist Dr Karin Schutz, investigating suitable bedding materials for stand-off facilities featured in the November 2016 Dairy Exporter.
She, along with co-authors Cave, Cox, Huddart, and Tucker have recently published the results of their most recent research in the Journal of Dairy Science:
Effects of three surface types on dairy cattle behaviour, preference, and hygiene.
Some consider stand-off surfaces to be principally a creature comfort feature, but as Schutz points out, these can affect not only lying times, but production, lameness, mastitis, stress, and energy requirements.
With cows being housed on stand-off areas for up to 24 hours a day, and on consecutive days, stand-off surfaces can have a marked effect on cow welfare. And where cows are grazing pasture for a restricted time after being housed on uncomfortable bedding, they may lie down at the expense of eating.
It has been shown that cattle on hard surfaces like concrete, even temporarily, have less lying time, lose body weight, show impaired gait patterns, and have higher glucocorticoid metabollites, (a stress indicator).
While it is recognised that cows avoid lying down on wet muddy surfaces, to date it has been unclear whether their dislike of muddy surfaces is due to its moisture or manure contamination. Here’s a summary of their trial work.

Eighteen in calf dry cows at AgResearch’s Ruakura Research Farm were monitored while on different 400mm deep wood chip surfaces.
The bedding consisted of pinus radiata wood chipper fines, with a particle size that will pass through a 10mm square mesh. Three bedding surfaces were included, these being:
• “Clean”; (clean and dry), dry matter (DM) of 44%;
• “Dirty”, (manure contaminated) DM of 40%. Soiled wood chip and manure were mixed, (40/60 ratio), and spread over the clean wood chip.
• “Wet”, (and clean), DM of 23%. Water was sprayed onto the wood chip until the water table was about 15mm below the chip surface, and water was visible when subjected to treading.
• Before the study began, the cows were housed on clean dry bedding for 18 hour periods over three days, to get them accustomed to the facilities.

The procedure after this was:
• Housing on one of the alternative bedding treatments for five days, (18 hours a day).
• Nine-day recovery period on pasture. (During this period, the bedding materials were replaced).
• Housing on the alternative bedding for each group for five days, (18 hours a day).
• Nine-day recovery period on pasture.
• Housing in pens which allowed them to choose between the two bedding types to which they had been exposed. This was for 18 hours a day, for two days. This protocol meant that each cow was exposed to two of the bedding types, (one at a time), with a recovery time between each.
Then after another recovery period, each cow was allowed a choice between these two.
While in the observation pens, (18 hours from 3pm until 9am), they had no access to feed. They went onto a fresh sward of pasture (and silage) for the other six hours of the day.

Lying Times:
Onset Pendant G data loggers fitted to the hind leg of each cow recorded whether the cow was standing or lying, every 30 seconds. So lying time, percentage of lying time, the number of lying bouts, and the average lying bout length could be determined. Video recordings which recorded lying position, were taken during the periods where cows were exposed to the beddings.
The cows on the wet bedding had about one third the time lying of those cows on the other two surfaces. As well, they spent more time lying down during their six hours on pasture. This is at the expense of feeding time. Even so, their total lying times were less.
Cattle will reduce their lying time on wet bedding to the extent that it affects their welfare.
They also spend less of that time lying in a lateral position with their head supported on their body or the ground, positions conducive to sleep. (They only experience rapid eye movement sleep with the head supported). Cows on wet bedding also spent more time shifting weight between their back legs, an indication of inadequate lying time.
The cows on the clean bedding spent a little more time lying on their bedding compared with those on dirty bedding, and least time lying during the six hours on pasture. Their total lying time in the 24-hour period was greatest.
The comparative times spent lying on the three bedding types suggests that the moisture content of the surface, rather than the contamination, was the factor which deterred them from lying down.

The cows on the wet bedding had fewer lying bouts, but there was no significant difference between the average length of these. They had more frequent bouts of longer duration, when on pasture, while over all they had fewer lying bouts.
Cows on the clean bedding had more lying bouts, though the average duration of these was shorter than those on the dirty bedding. Number of lying bouts and duration was similar to the cows off the dirty bedding, during their six hour pasture phase. Overall, the “clean cows” had the most lying bouts but of less duration than the “dirty cows”. 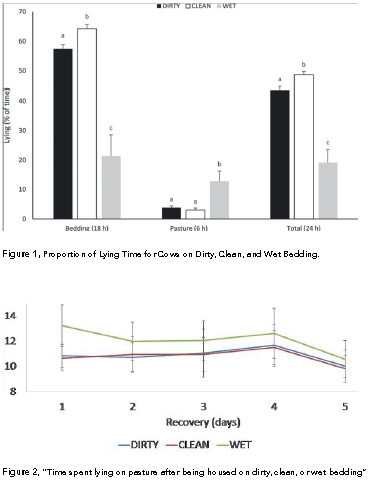 Gait score before and after each of the five day no choice periods was recorded. While gait scores did not exceed 2 on a scale of 1 to 5 in the study, increases in gait score of six of 12 cows on the wet bedding over this short time indicate that cows on wet bedding are more likely to experience lameness when exposure is longer. And as hooves absorb water quickly, this leads to softer hooves and an increase in lameness.

Hygiene scores were assigned before and after exposure to the bedding types. Time and location of defecation and urination was recorded. Unsurprisingly, cows on the dirty bedding were dirtier than those on the clean and wet bedding, who had similar levels of dirtiness. They tended to avoid urinating and defecating on the clean bedding, and showed no preference on where to urinate between the dirty and wet bedding. Higher levels of moisture and manure most likely increase the exposure to mastitis causing pathogens, and poor hygiene is associated with higher somatic cell counts and sub-clinical mastitis. 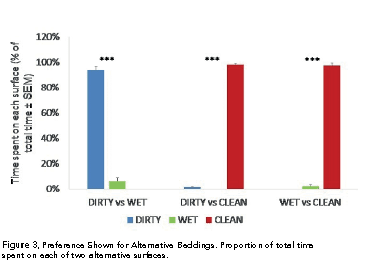 Wet bedding is known to affect cows. They experience an increase in heat loss especially in cold weather, and it is thought they spend less time spent with their front legs tucked to conserve body heat. (Cows are known to avoid forage and drinking water contaminated with manure).
While it has been known that cattle avoid getting manure on themselves, this study has shown they avoid lying on manure contaminated surfaces. They even try to avoid urinating and defecating on clean, dry areas.
Schutz and her colleagues summarise their work: “There is compelling evidence that wet surfaces impair the welfare of dairy cattle by affecting the quantity and quality of rest. Rebound responses indicate that the motivation to rest is not fulfilled on wet surfaces. Finally, when given a choice, they show clearly that they will avoid wet and dirty surfaces. The combined results indicate that changes in affective state likely underlie these behavioural responses”.
Farmers contemplating building stand-off facilities should keep the results of this work in mind, and incorporate a high standard of drainage, and consider covering the facility to minimise moisture levels in the bedding.
Farmers who have existing stand-off facilities should also learn from this work, and keep the surface as clean and dry as possible. And keeping stocking rates to a reasonable level will minimise moisture and contamination levels.