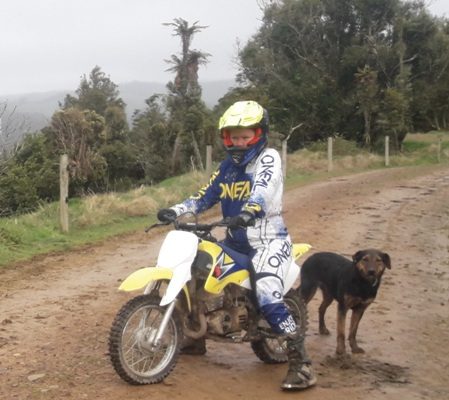 An injury following an incident at a herd sale has
Sam Sherrard reflecting on safety matters.

Things got away to a cracking start this season. At the time of writing we are well ahead on both production and cows calved due to some bought-in cows calving earlier than usual. A warm and dry autumn was a relief and built covers setting us up well for winter.

Uncertainty seems to be the emotion of the moment with everyone finding their own reasons to be apprehensive about what is around the corner. Reflecting on your position during these times can be useful so long as you can maintain objectivity. For some a farm sale may be the trigger, for others a milk price shock. For me, however, it was literally a blow to the head.

It was a fresh blustery day with talk of high winds developing over the North Island, such a shame then that local stock agents decided to put up their unmaintained and damaged marquee for the sale that day. No one took heed of the torn, worn and patched-together strops, instructions long since disposed of were ignored as the stock agents prepared for the business end of a herd sale process.

A gust snapped one of the strops, pegs came out of the ground and the whole marquee went over. In the process a piece of metal flew into my head. Apart from remembering feeling a very hard blow to the head the next thing I remember was hearing someone say “what about that guy over there”.

I have been fortunate to not have to spend time in A&E on a regular basis, so it was quite an eye-opener to see what the staff regularly deal with.

A number of clients appeared to be just avoiding paying for a trip to their local medical centre – sentiments sadly confirmed by the staff. There was only one visit from the police while we waited – this on a Thursday afternoon.

After searching for ‘boggy bits’ in my skull, thankfully they didn’t find any – six stitches and a neurological assessment, we were free to leave a mere three or four hours after arriving. Cue six hazy weeks where not much was achieved onfarm. A further six weeks has passed, most symptoms have eased apart being unreasonably tired (and apparently grumpy?).

ACC have been as good as they can with my occupational therapist reminding me that, “many people come to see their concussion as a positive experience”. While I am still a long way from that, I have learnt a lot about organisations – what makes a good one, and what makes a bad one. My wife’s workplace hand-delivered groceries and treats the next day and instructed her to “take as much time as you need to sort Sam and the farm out”.

The stock agents on the other hand, in my opinion have fallen far short of the mark. Talking to the H&S rep days after the incident, he wasn’t sure if he was going to notify WorkSafe because it was, as he described “a bit of a grey area”. This led to a brief discussion where I outlined the three or four items that seemed by WorkSafe’s own guide lines to mean immediate notification should have already occurred. Perhaps by coincidence, after my call WorkSafe were notified!

I found this disappointing. I was further let down when weeks later the rep came to visit and made some “mistakes” around key facts. He then said he could not answer some of our questions on the advice of his lawyers. He left soon after this and I have not seen him again.

This is when the stock agents really showed their class, they wanted to have a meeting with us, and smoother operators were called in to unruffle a few feathers. These guys were pros – when confronted with the errors of their predecessor, they admitted them, but could not offer explanation. On the subject of the lawyers they were at a loss because, as they put it, “the lawyers” had not even spoken “to him”.

After our bumpy start to the season we are starting to get things knocked into shape, now all we have to worry about is the milk price, environmental regulation, the dreaded methane, international trade upheaval, Brexit…