In her Dairy 101 column, Karen Trebilcock gave a rundown on wages, asking "are you ready for the minimum wage change?"

Far from being an April Fool’s joke, it was the start of the financial year for many businesses, but not farmers.

If you’re a farm owner with sharemilkers or contract milkers you may think it won’t affect you but it does. The profitability of their business, and so yours, just took a hit.

Back in 2015 the minimum wage was $14.25. That’s about a 40% increase if my maths is right. For farm staff, employees must be paid at least the minimum wage for every hour they work on farm whether they are employed on an hourly rate or on a salary and it can’t be averaged out over a season. If you pay weekly it has to be weekly, if you pay fortnightly it has to be fortnightly but if you pay monthly it still has to be for a fortnight. Two weeks is the most you can average the hours out over.

If you have employed a staff member on a salary, the number of hours they can work for that salary have now been reduced.

If they work more hours than that then you have to pay them more.

And no, you can’t give them a load of firewood or some meat in the freezer to compensate for a late night milking because the power was out.

The minimum wage has to be paid in real money.

Such things as housing, firewood and meat can be deducted from the wages if the employee agrees to it first and it has to be recorded separately on the employment contract. It also has tax implications so always talk to your accountant about it.

As an employer, you must keep accurate records of hours worked per week, wages paid and leave taken to show you are doing everything right.

If an employee is lax about giving you their hours then put a system in place to make sure it gets done every time correctly so there is no come back on you later.

And this includes breaks – don’t forget the 10 minute paid break after more than two hours has been worked. If milking takes two and a half hours you have to pay your relief milkers two hours and 40 minutes for it. If the pay is a set amount it must be at least $53.34 for that two hours and forty minutes to meet the minimum wage requirements.

I know it’s only 10 minutes for a break you hardly ever take but during a season it adds up, as does a possible legal bill if you ignore it.

There are a few groups of people who don’t need to be paid the minimum wage.

The first is under 16 year olds. You can pay them what you like but if they’re doing the same job as older employees on the farm and are doing it just as well maybe you should consider paying them the same.

If you were their parents you would want that, and 15 year olds are usually getting ready to buy their first car, save for tertiary education and might even want to buy the calves you don’t want. Giving them a step up will always be remembered.

The second group is those aged 16 and 17 who have not worked for a continuous six months for you.

The minimum wage rate, called the starting out minimum wage, for them is $16/hour. It also applies to 18 and 19 year olds who have come off a benefit.

Six months continuous work means simply they must have worked for you for six months, regardless of the hours.

If they have worked for someone else for six months and then come to you, they are back on the starting out minimum wage all over again. Unless, of course, you recognise they know what they’re doing and you want to keep them around and not have the neighbour entice them away with better pay.

"...you can't give them a load of firewood or some meat in the freezer to compensate for a late night milking because the power was out."

But there is another minimum pay on farms as well – for migrant workers.

Whatever you pay in wages over the minimum wage should reflect the employee’s skill level including qualifications and years working on farms.

It has to be good enough to attract workers away from off-farm jobs which usually have day-time hours and all weekends off.

Living the good life onfarm is not enough.

Milking cows is long hours and the work is often physically and mentally exhausting.

As well, we don’t want a generation of farm staff who are only ever paid wages. If they are paid well enough so they can save, then they can start out as contract milkers and build their own businesses and pay their own employees.

But the minimum wage is not just about how much to pay your staff. It also sets a benchmark for business owners as well.

If contract milkers and sharemilkers are not being compensated at least the minimum wage for the long hours they work, both on the farm and in the office, through their business profit then they might think twice about doing it.

Sure they are gaining through their stock and write offs due to being in business plus they get to be their own boss, but there is nothing that quite deflates the ego as much as when you realise you would be better off on wages.

This is something all farm owners need to think about. 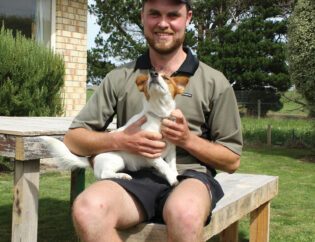