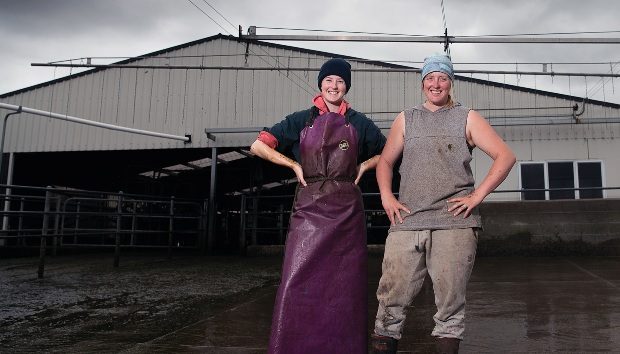 Tararua farmer Ben Allomes was never keen on 16-hour milking and says his switch to what he calls “2 and 1” has paid off. Jackie Harrigan reports.

I can’t see us going back,” Ben Allomes said when asked how his 3-in-2 milking is going, having moved to the system at calving time in the 2019/20 season.

Ben calls the system “2 and 1” in that he milks twice one day and once the next day. It’s a step he had been thinking about and had read of others doing and decided to give it a go when his heifers were light at the start of the season.

Now over halfway through the season he says it has paid off – with cows happier and in better condition, the staff loving it, and having cut a slew of costs has meant he has easily covered the small drop in milksolids production.

He is estimating a loss of milk income of 2.5% at season’s end, so 10kg milksolids (MS)/cow, but says the cows will still do more than 400kg MS each and the breeding advantages, better body condition score, much lower animal health problems, less repair and maintenance and happier staff, among other benefits, make the move an overwhelmingly positive one.

“It’s amazing how it just really suits this farm – we were never happy with twice a day milking, the hilly nature and long walks meant cows were always a bit light, and when we tried OAD the heifers dried themselves off. But the 2 and 1 system is just a really happy medium – and amazingly the paddocks sizes and typography have just matched the system.”

“It’s a happy and beautiful thing.”

“Cows are adaptable, so why not make them adapt rather than the people? “

He and wife Nicky have set their system up to be 19 hours:20 hours:9 hours, which suits their team much better. Currently they are milking 11 times each week, and after reading about the Hendersons of Southland doing it, Ben was contemplating dropping out the afternoon milking on a Wednesday or Sunday and planning to give it a go on Christmas Day.

“It depends how annoying the kids are… it might be – ‘right, I am off to milk the cows’,” he laughed.

“I think if we could drop Sunday afternoon we can have a consistent week – that’s what I am looking forward to – then we won’t have to think about if it’s a TAD day or a OAD day, we will have a set routine.”

Sorting the numbers to make grazing allocations easy was something Ben says took a little while to get his head around, but once it was cracked, that was his light-bulb moment.

“We needed to translate the traditional cows/ha (square metres/cow) into a longer grazing interval.”

It ended up being up being the cow density x 1.33 to get the longer single-milking-day feed.

The short day feed is x2.

The cows are getting 133% of their daily allocation for the two long days and then just the normal for the day feed.

The farm already had paddocks well configured to fit the new system – with the smaller paddocks on the flats closer to the shed perfect for the shorter feeding interval and the cows having to walk to the back of the farm less – saving on time and energy spent walking.

Spending more time in the paddock means the cows are foraging and better eating out the paddocks – with great results for the ongoing pasture quality.

TIMING Starting at the start of the season meant they could get keep the colostrum cows consistently milked about 10am on OAD.

“The AI technician comes in at around 12 noon so we haven’t had to change anything there – we are lucky at where we are on the round.”

Ben was prepared to revert to TAD if need be for the AI period but didn’t need to to fit in the technician’s timetable.

POSITIVES Ben is very happy with how the cows have produced milk.

‘The volume is down but the solids are up.”

“We might have got another 0.1kg out of them on TAD, but we didn’t have the same weight loss after calving and they have cycled so much faster.

“The biggest change I noticed was there wasn’t that weight loss when they can’t eat enough grass to keep the weight on.” Ben said.

“It could’ve been a seasonal thing – but I think it was phenomenal – because they didn’t have that energy imbalance.

“I think that less milking time meant slightly less milk production (the 0.1kg MS) – but that would’ve normally come from weight loss, which we avoided. Making milk from bodyweight is a waste of money – it’s very expensive to put that weight back on.”

“Plus we have seen better animal health.”

A 99% submission rate over six weeks enabled the Hopelands team to make two years progress in one.

The walkover scales showed the cows putting weight on much sooner than usual and they were cycling within 28 days of calving rather than 42 days, on a mainly-grass system with just some palm kernel in a trailer outside the shed for the first four weeks of lactation and then as and when required, Ben said.

“And they were milking really well.”

While AI costs will be up from mating more cows earlier on, bull costs are way down – in week eight of mating there are only two bulls out with the cows as so many of the cows have held to AI.

“I was able to be much tougher on who to mate for replacements as we had so many more cows cycling earlier – we were very discerning and then used much more Wagyu and short-gestation Hereford beef semen to boost our calf income.”

Another positive was the drop in lameness with the cows walking half as often out to the back paddocks.

‘It’s a hilly farm with 1.9km to the back – up a big hill and down the other side. Under the TAD system once the cows got out the back, climbed up the hill and grazed – they didn’t really have enough time to clean out the paddocks. With a longer stretch in the back paddocks the cows forage better, residuals are better, quality is better and they are getting twice as much area and only walking out there half as often.

“They go to the back paddocks a third less and are doing half as much walking – which means R&M has dropped massively on the back races as they are not getting used as much and being degraded so we can put more effort into the closer races.

“We can give also them an extra paddock if necessary, whip out at 6am and give them a fresh paddock before the 10am milking.”

Culling costs have been slightly more – although those cows may be being culled earlier in the season rather than later.

“In the short term we have a slightly higher replacement rate while those poor udders weed themselves out.”

While it’s hard to compare across seasons and they haven’t yet completed a whole season, Ben is very pleased with the way the “2 and 1” is playing out.

“Milk income will not be sacrificed at all – in mid-December the cows are up 1% on last year and up 11% for the month – while it’s a different season to last year, I am certain the cows are heavier, they are easily half a BCS up on last year.

“I am sure they will milk on longer this season at a higher rate as well.”

“And our costs are way down so I am sure we will come out on the more profitable side.”

When asked why he didn’t go to the OAD system, Ben says this hybrid system is more sustainable as it’s better on cows and people without the big loss of production and more bank pressure – “it’s the best of TAD combined with the best of OAD – just a really happy medium.”

Moving to three milkings in two days is a winner with the team at Hopelands Dairies.

Ben and Nicky Allomes have been running a modular staffing model on their Woodville farm with all eight fulltime and part-time team members on an hourly rate and digital time sheets and distinct farm and milking roles. Team members can take on extra work if they want more hours and a lot of emphasis is put on training and upskilling.

The team love the new “2 and 1” regime and Ben says the system has been great for staff wellbeing.

While the actual hours of milking are the same in a week, as milking takes longer on the single milking day, Ben says time is definitely made up by not having to walk cows for an hour before and after each milking per herd on those single milking days and a lot less shifting of cows.

“It has made labour a more fixed cost rather than a variable one – our essential labour cost will drop by about 15%.”

“It simply means that if team members want more work, they can pick up extra duties and we will get them doing some of the contract roles -and save on the contracting budget.”

On the one milking day, the team start after breakfast, at 7 or 7.30am, milk the cows and then wash up and the milking team can go home, unless they want to pick up more hours. The farm team do jobs setting up paddocks and R&M and get ready for the weekend.

Earlier in the season when they were between team members ( the Irish travelling couple who worked over calving had moved on and summer students not yet started) Ben says he and Lucy, his 13 year old daughter, were able to run the farm with just the two of them – him milking in the 60-bail rotary and Lucy getting the cows in and putting them away on her horse.

“And we still could be off at an event in the afternoon.”

Running training sprints is much easier with that new regime as the team are available in the afternoons – Ben says they put lots of effort into training local members of the community and upskilling them so that they can join the team as a potential part-timer or full-timer “whatever suits them”.

“We also spend lots of time upskilling our team on to new jobs so they can progress within the team and lift their hourly rate.