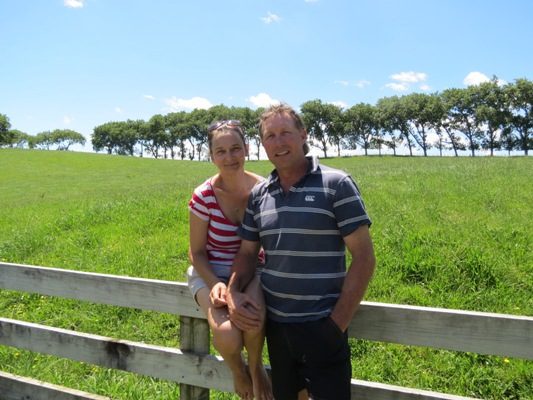 Colm and Gaynor Tierney are standing at a crossroad asking themselves: is big always better?

The couple own a 75-hectare farm at Ngaruawahia in the Waikato, which is currently run by a 50/50 sharemilker, and are themselves 50/50 sharemilking 500 cows at Horotiu, 10 minutes out of Hamilton.

They have a $100,000 overdraft, but are otherwise debt free, and are weighing up their next move.

The couple spoke at the recent inaugural Pasture Summit in Hamilton on how they’ve achieved their equity.

Keeping to a low-cost pasture system that is profitable, working for the right people and building good relationships were some of their main tips for future farm owners.

Colm grew up on a dairy farm in Taranaki after his parents moved out from Ireland when he was two, while Gaynor grew up as a city girl in Cork and London. Colm studied a Diploma in Agriculture at Massey University and was working on the Taranaki Research Station when he met Gaynor who was in New Zealand on work experience while studying an agriculture science degree at Aberystwyth University in Wales.

The couple lived in the United Kingdom for a few years where Colm worked on dairy farms and Gaynor worked as a farm consultant. They moved back to NZ and Colm got a job as a farm manager and Gaynor started as a consulting officer.

Making the jump up to contract milking or sharemilking when you’re working for wages is hard, and Colm negotiated with his farm owner to be able to rear 30 heifer calves a year instead of going contract milking on the farm. Meanwhile, they saved Gaynor’s entire salary.

‘Don’t sweat the small stuff. There are small things as sharemilkers you can get hung up on, likewise for farm owners and it’s not overly important in the grand scheme of things – you have to let it fly.’

Those sorts of opportunities don’t land on your lap and you must be a go-getter and be prepared to ask, Colm says.

“People just aren’t going to hand you an opportunity – you have to go out and look for them, build good rapport and relationships with farmers in your community and your employers.”

There are plenty of excellent dairy farmers out there who are willing to share their advice and Dairy Connect is a great place to look for a mentor, Gaynor says.

“It’s about talking to the right people. Farmers that have been there, done that, are the greatest source of advice and there is no shortage of good farmers happy to talk to you.”

With farms getting larger, the first step on the farm ownership ladder is getting harder to reach for people working on farms if farm owners are not prepared to give them opportunities.

Giving the next generation that chance is key to keeping dairy farming strong and attainable in NZ, Colm says.

“NZ was one of the places you could own your own piece of dirt and do what you want.

“I’m conscious of scale in NZ. I don’t want it to be like the UK, where there are massive farms owned by Lord So-and-so and the labourers are working on the farms.”

“There are brick walls, but they’re perfectly climbable.”

She wishes more farm owners would look at their finances and consider putting a sharemilker on.

“Farm owners put up a brick wall about putting a sharemilker on, but sharemilkers absorb a lot of the basic running costs of the farm – which are the costs that have been climbing – petrol, labour, all variable costs.”

In 2008 Colm and Gaynor moved to their current sharemilking role initially milking 530 cows and bought their dairy farm in 2012 along with 220 cows. The couple initially put a contract milker on their farm but have since opted to employ sharemilkers.

Having reasonable debt loading was a key part in being able to make that decision. But from a stress point of view, it made sense to put a sharemilker on the farm, Colm says.

“In my mind, a sharemilker takes almost complete responsibility for the farm. We weren’t getting home until 9pm some nights, with young children, and our main responsibility had to be our own sharemilking position.”

To be a successful sharemilker you have to be able to have a good relationship with your farm owner. It’s always a good idea to do a reference check on potential employers and understand the expectations of farm owners, Colm says.

Having good clear communication with your farm owner at every turn is then extremely important.

Another piece of good advice for keeping good relationships is to not let small disagreements end up in a battle, Gaynor says.

“Don’t sweat the small stuff. There are small things as sharemilkers you can get hung up on, likewise for farm owners and it’s not overly important in the grand scheme of things – you have to let it fly.”

If a sharemilker is doing 90% of the job well then farm owners shouldn’t get hung up on some of the small stuff, Colm says.

“We see both sides as farm owners and sharemilkers. There has to be give and take.”

Knowing what a farm owner’s expectations are from the outset is a big part of making it work, he says.

“The older generation think nothing of working a 70-hour week. When it’s your own farm that’s fine.”

Trying to bridge the expectation of a farm owner and the reality of the hours a farm worker should be doing is the role of a good sharemilker.

A key part of their business success has been that they have focused on profitable low-cost systems. The couple have consciously looked for positions where the farm owners were pasture-driven and they wouldn’t get caught in the high-input trap.

While working in the UK 20 years ago they saw first-hand that high-input systems weren’t making money.

“These farms were putting in all this feed and making no money,” Gaynor says.

It’s a worry to think that the new generation working on dairy farms today have never farmed without palm kernel, Gaynor says.

It’s hard to teach the importance of pasture management when they have palm kernel they can rely on.

“It’s a lot of effort to look at paddocks every day, to look at residuals and make daily decisions.”

It makes the couple cringe with the number of farmers cutting grass silage while they’re still feeding out supplement.

“People have put this supplement into their systems and then they don’t take it out. They’ve built infrastructure and they have the mindset they need to be utilising it every day,” Colm says.

It’s made worse when farmers’ main driver is their production in the vat – they focus too much on how many milksolids the cows are doing, rather than how much money it’s costing them to produce it.

For farmers sticking to low-cost pasture systems, they should be confident they are winning in the long run, Gaynor says.

“Farmers should have confidence in their system and turn up to a discussion group and know their cows might be producing less, but their profit margin is better.”

To climb the ladder in the dairy industry, people must be committed and prepared to do the hard yards.

It can be made easier by finding the right partner, whether that’s in a relationship or a business partner, Gaynor says.

Being a couple, both engaged in the business, out working onfarm doing the hours, managing the children together, has been their strength.

“The reality is it’s hard work, you have to go above and beyond. You’re not going to get to farm ownership doing a 40-hour week, it just doesn’t work.”

They have always looked for cost saving in their business and can live on the smell of an oily rag at home when they need to, she says.

Their key focus has always been their cash profit. They are constantly thinking about costs and do a lot of the farm jobs themselves instead of getting contractors in. Colm, farm owner and the staff do all the fencing, fertiliser spreading, cutting grass silage, and ground preparation for the maize.

“The only thing we contract out is baling grass silage and planting and harvesting maize.”

They employ two fulltime staff, Jacob and Emily to work alongside Colm, and Gaynor is usually the relief worker, but this year they employed another part-time worker while she cared for the twins.

Last year when it turned dry during mating and they had to buy in an extra 100,000kg drymatter (DM) of supplement, Gaynor looked at their personal drawings.

“From a cost structure point of view, we were under pressure, it was too early to cull cows, and we had just come through a terrible spring. It was the worst-case scenario last year.

“The payout was okay but you start looking at cutting costs, and that includes personal drawings.

“The kids and I were all down there helping where we could, I forgot I was seven months pregnant with twins some days!”

The couple milk the cows every stat day and have worked every Christmas and New Years for the last 20 years.

They work hard and have made sacrifices to get to where they are. But they ensure they make time for family and regularly go camping and went to Europe for three months with the children last year.

“The kids have an expectation that we take holidays – but they help on the farm, they know it’s not a free ride.”

It’s a balance trying to ensure your kids don’t work as hard as you did, and making sure they’re not spoilt, Colm says.

The couple are weighing their options for the future and are looking at other farms to buy or possibly lease long-term.

Their seven children, aged 15, down to their eight-month-old twins, have changed the goal posts when it comes to their equity goals and what they want in life.

While they still want to build equity, they also want to prioritise their family.

One option would be to move up to their Ngaruawahia farm, milk the cows once a day, buy a boat and spend more time with their children. They’d have no debt and no stress.

“I grapple with people’s measure of success – what makes us successful? If we buy another farm, are we more successful than if we go and live on our farm and milk the cows once a day and have more time to spend with our children?”

Their goal would be to purchase and run a drystock property with a Hereford stud.

“We need to sit back down and evaluate what we want,” Gaynor says.

They’re also aware that when purchasing farms, the environmental footprint and potential impacts on the production must be taken into consideration. Stocking rate restrictions, carbon emissions and nitrate leaching all must be part of the equation, Gaynor says.

“As a purchaser you absolutely can’t afford to pay too much. Vendors don’t care about carbon emissions if they’re getting out. They’re not going to be farming there in 10 years’ time.”

While there may be more challenges for dairy farmers in the future, there will always be opportunities and people just have to think outside the box, she says. 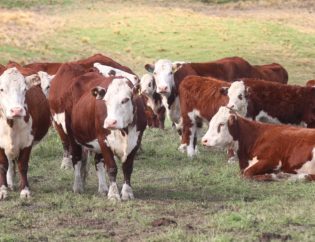