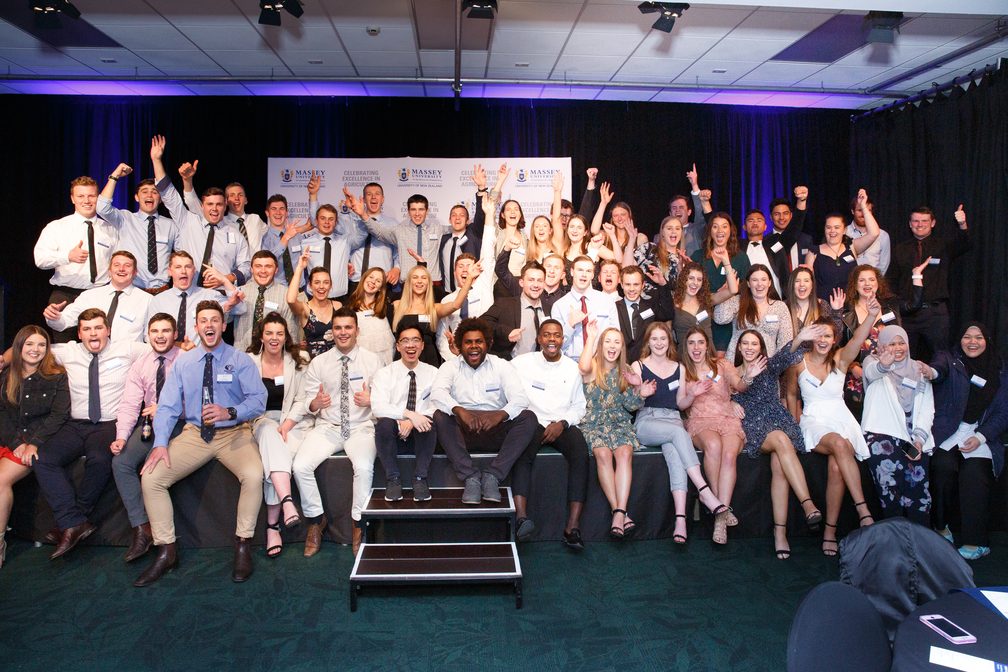 The future of the primary sector may look stormy at the moment, as many speakers from the Massey Ag Awards Dinner acknowledged, but the calibre of talent onstage throughout the evening showed that the class of 2019 and the wider school of agriculture are smart, innovative and optimistic and prepared to tackle the changes in the industry, head-on. I spoke with three of the night’s top award winners about their experience at Massey and plans for the future. 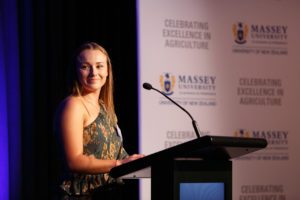 Megan is no stranger to awards and has thrived in the tertiary system, excelling in her academics while also taking a keen interest in the diverse extracurricular mix university life offers. In a young labour force where having a tertiary education is the norm, the allure of outside activities is heightened to liven up your week and give your CV uniqueness. After seeing the long list of Megan’s hobbies you get the feeling she’s also a person who loves to be busy.

“University is a great opportunity to gain independence and develop time management skills, especially when taking on co-curricular responsibilities.”

In this year alone Megan has won the Sally Hobson award – for service to Young Farmers – and an academic excellence certificate while chairing the Massey Young Farmers Club, playing netball for the uni netball club and interning weekly at Cervus Equipment (the John Deere dealership for Feilding). During the uni summer break she even interned for Farm Source.

Her initiative and know-how has also opened doors to overseas travel. This month the 20-year-old will visit Chile and Peru for a month as part of the Prime Minister’s Scholarship for Latin America while earlier in the year she represented New Zealand at the International Food and Agribusiness Management Association Conference and Business Case Study Competition in China. Her team took out second place, making them the first ever NZ team to do so. But after all these achievements Megan is still humble. When asked about her feelings on being named the Massey Agri Student of the Year, she says: “There is a fantastic group of agriculture students coming through Massey and several who are just as deserving of this award.”

Megan grew up in Hari Hari on the South Island’s West Coast, where her parents ran a dairy farm (more recently they have moved into avocado farming, buying an orchard in the Bay of Plenty). She thanks her upbringing for her passion for farming and her parents’ open dialogue about how the business runs.

When 2020 rolls around Megan will start work with Farm Source in their Agribusiness Graduate programme. “I want to soak up as much information and take any opportunity that comes my way,” she says. Beyond that, she hopes to one day be in a governance position in the agribusiness sector and to get on the farm ownership board. 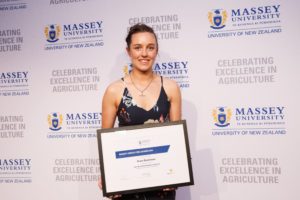 “Going through university I have always sat the middle of the pack when it comes to grades and never in a million years would have thought I would be receiving an award at the Massey Ag Dinner.” Grace’s achievement is testament to the fact that grades and academics don’t count for everything. The 20-year-old is an all-rounder in the best sense of the word, an avid sportsperson whether on or off the field (however, a prolonged injury has kept her off the field much more than she would have liked, the past few years) she is a big advocate for the collaborative nature of sport and is a keen networker.

Growing up on a dairy farm in Mangatainoka drew Grace to agriculture from the start. Watching her parents grow their farm into a thriving business was also a huge inspiration, she says, and now farm ownership is her dream too. On the way there, Grace’s steps are all deliberately farm-focused. At high school in Feilding she took several agricultural subjects, and throughout her degree she has been heavily involved with the Massey Young Farmers Club – this year taking on the role of club secretary. When not studying, Grace has also worked for Farm Source in Pahiatua, an experience she appreciates because it gave her exposure to the industry at a grass roots level.

Massey University has been convenient because it’s not far from where she grew up. “I am able to get my farming fix and get out of the city whenever I want. Home is only 45 minutes away, so I am always willing to lend a hand in the weekends when I’m free.” Her brother already happened to be at Massey studying a bachelor of Agri-Science when Grace was looking at uni’s and that was enough of an endorsement to pull her toward it too. But it’s not the only one: “Even though there are many people doing agricultural degrees everyone knows everyone and are willing to help out wherever they can” and she likes how the Massey Agri-School is well respected by local farmers and ag professionals.

Next year, Grace has been accepted into the BNZ Agri-Business Graduate Programme; she thanks her degree for the networking opportunities it provided her because knowing how to talk to farmers from different backgrounds is a skill she knows she’ll be putting to good use at BNZ. 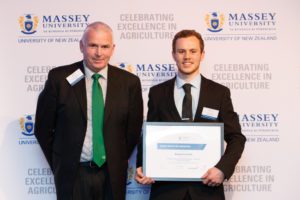 “I didn’t come to university to just pass, because I didn’t just want to learn 50% of the course material. Rather, I wanted to learn everything I could from my degree to set the best platform for my career,” Ben says of the high expectations he holds for himself.

After winning the first-place academic prize in 2017 he set himself the goal of repeating it in his follow years at Massey. Now at the end of 2019, finishing his AgriCommerce degree, Ben has more than achieved this. Among his awards this year, the highlights include the Lord Bledisloe Prize (for best Agriculture student), the CY Cress Prize in Agriculture and the Collis Blake Prize in Animal Science. “Receiving the awards really made it feel worth it going the extra mile with every assignment, report and exam throughout my degree.”

Ben’s upbringing shaped him into a self-driven person. From a young age there was an expectation that the whole family helped on the farm. While his dad worked as an architect, Ben, his mum and four siblings did the day-to-day tasks on their hill country beef property. Before the age of 16 he was calf rearing, fencing, fixing water leaks and feeding out (at 14 he even did two seasons milking and rearing calves on a local dairy farm). The family then moved to a 14-hectare lifestyle block and again Ben got stuck in to improving the property – digger and tractor work, re-fencing, laying water lines and creating a new race. Being home-schooled and then taking NCEA by correspondence meant he spent a lot of time on the farm, and he had no problem with that.

Going to Massey was a big move having come from Mangawhai, an hour’s drive north of Auckland. Originally, the 21-year-old majored in Rural Valuation, but after attending a rural banking presentation he found there would be more scope in a Farm Management major. “In the world today, being able to take a big-picture and holistic approach to problems is becoming increasingly important, and this requires a broad topic understanding.”

Aside from his studies, Ben has been involved with the Massey Young Farmers Club, this year as club treasurer, and you can’t say he’s neglected his social life because he’s getting married in January. Also coming up soon, Ben will start in BNZ’s Agribusiness Graduate Programme.

Speaking to a two-time world archery champion, you get the feeling everything he puts his hand to he gives his full time, skill and attention. And with aspirations of becoming a rural bank manager and an agriculture consultant it seems nothing could stop Ben from succeeding at that too, and much more.

Other winners from the night:

Hort NZ Producing the best report for Practicum 1– Bert You