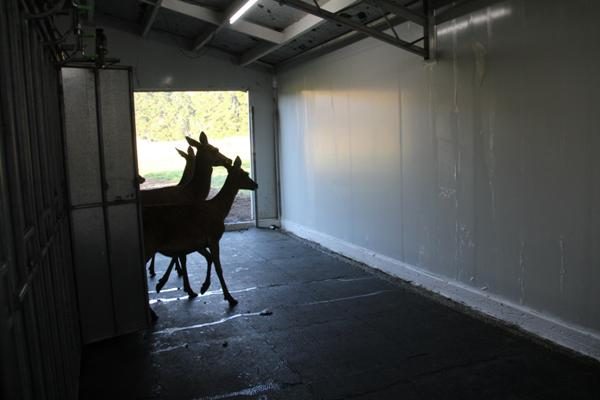 Developing a deer milk business is another way to add value for a Mt Somers operation. Lynda Gray reports.

Mark Faulks’ move into commercial-scale deer milking mirrors in some ways the move into deer farming by his former employer Tim Wallis.

“A lot of people thought Tim was mad when he said 50 years ago that deer could be farmed and it’s the same reaction we’ve had from some people when we told them we were going to milk deer.”

‘The hinds were more difficult to handle because of their mothering instinct. We know that they’re a lot more relaxed once the fawn is weaned and forgotten about which is much the same with how it is with a dairy cow.’

Along with milking manager Di Herron and her partner Simon Wakefield, the team milked this season 120 Red hinds once a day in a 10-aside herring bone shed. The season started after weaning in late February and finished at the end of April during which about 5000 litres of milk was produced.

This season has been more about R&D, and building up the milking numbers, Mark says.

“We were milking 120, but those milked were constantly changing in order to select more and better hinds.”

The herd has been selected and built from a large pool of breeding hinds sourced from Graham Carr’s Peel Forest Estate plus bought-in animals with similar bloodlines. Mark says they tried hand-rearing 80 fawns thinking they might be easier to handle but that wasn’t the case, they were too familiar due to the personal contact and difficult to move through the shed.

There’s been lots of learning and recording to get benchmarks and systems in place, a good example being getting a handle on typical daily milk production per hind. They discovered a huge variation – 300ml to 1.7 litres – from which they set a 700ml cut-off for likely herd candidates. Hinds also needed the right temperament which was assessed by dispersing them among the core group of milkers and taking them through the process.

“Out of 100, usually 30 to 40 will handle the shed and milking, but out of that up to 10 will drop out because they don’t milk enough so we’ve ended up with about 25 from every 100.” Milking starts at 6.30am and wash up is usually finished by 9.30am. The milk can be stored for up to 72 hours in a refrigerated vat until pick-up by a Talbot Forest Cheese mini tanker which takes it to Geraldine for processing.

Aside from producing milk, the hinds are proving to be above-average performers in other respects. Both fawning percentage and fawn growth rates are higher which Mark credits to the quiet temperament and milking ability of the hinds.

“These hinds are happy to fawn in paddocks and act more like cattle than deer.”

Management and feeding of the milking herd is reasonably straightforward. A milking platform feeding area was upgraded with high legume pasture mixes. Hinds are rotated around the area and cattle are used to keep the pasture in check.

“We’ve tried all types of supplements to help if pasture quality drops off and have found that the hinds respond well to magnesium and calcium.”

There’s been experimentation around hind and fawn management in the lead-up to milking. This season some fawns were weaned in February and hand-reared, while others were taken off the hind for a few hours during milking. The shared milking arrangement sounded good in theory but in practice separating the hind and fawn, even though for a short time, created problems in the milking shed.

“The hinds were more difficult to handle because of their mothering instinct. We know that they’re a lot more relaxed once the fawn is weaned and forgotten about which is much the same with how it is with a dairy cow.”

Based on this season’s findings Mark thinks the best system will be to introduce high-protein meal to the fawn while still on the hind, then wean the fawn at 20-25% of their mature body weight for shed rearing.

“It’s much the same system used for dairy calves where they are weaned off milk on to meal at 20-25% of their mature bodyweight. They grow just as well if not better than being on mum.”

Another future development will be the conversion of a specialist milking unit elsewhere for up to 500 hinds.

“We already have 400 hinds for next season that are trained, production-checked and ready for milking.”

Mark also hopes that a turnkey-type package will be developed for people keen to diversify into deer milking, detailing how to go about a conversion and where to source the appropriate expertise and inputs.

“We’re confident that we can make a commercial and sustainable business from milking and we see it as another way of adding value to a deer farm.”