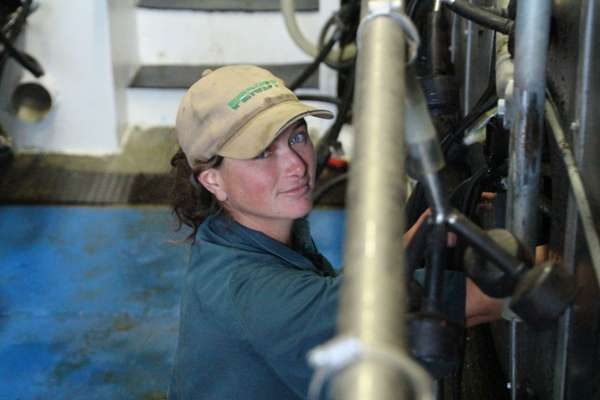 Developing a deer milk business is another way to add value for a Mt Somers operation. Lynda Gray reports.

Mark Faulks’ move into commercial-scale deer milking mirrors in some ways the move into deer farming by his former employer Tim Wallis.

“A lot of people thought Tim was mad when he said 50 years ago that deer could be farmed and it’s the same reaction we’ve had from some people when we told them we were going to milk deer.”

The hinds were more difficult to handle because of their mothering instinct. We know that they’re a lot more relaxed once the fawn is weaned and forgotten about which is much the same with how it is with a dairy cow.’

Along with milking manager Di Herron and her partner Simon Wakefield, the team milked this season 120 Red hinds once a day in a 10-aside herring bone shed. The season started after weaning in late February and finished at the end of April during which about 5000 litres of milk was produced.

This season has been more about R&D, and building up the milking numbers, Mark says.

“We were milking 120, but those milked were constantly changing in order to select more and better hinds.”

The herd has been selected and built from a large pool of breeding hinds sourced from Graham Carr’s Peel Forest Estate plus bought-in animals with similar bloodlines. Mark says they tried hand-rearing 80 fawns thinking they might be easier to handle but that wasn’t the case, they were too familiar due to the personal contact and difficult to move through the shed.

There’s been lots of learning and recording to get benchmarks and systems in place, a good example being getting a handle on typical daily milk production per hind. They discovered a huge variation – 300ml to 1.7 litres – from which they set a 700ml cut-off for likely herd candidates. Hinds also needed the right temperament which was assessed by dispersing them among the core group of milkers and taking them through the process.

“Out of 100, usually 30 to 40 will handle the shed and milking, but out of that up to 10 will drop out because they don’t milk enough so we’ve ended up with about 25 from every 100.” Milking starts at 6.30am and wash up is usually finished by 9.30am. The milk can be stored for up to 72 hours in a refrigerated vat until pick-up by a Talbot Forest Cheese mini tanker which takes it to Geraldine for processing.

Aside from producing milk, the hinds are proving to be above-average performers in other respects. Both fawning percentage and fawn growth rates are higher which Mark credits to the quiet temperament and milking ability of the hinds.

“These hinds are happy to fawn in paddocks and act more like cattle than deer.”

Management and feeding of the milking herd is reasonably straightforward. A milking platform feeding area was upgraded with high legume pasture mixes. Hinds are rotated around the area and cattle are used to keep the pasture in check.

“We’ve tried all types of supplements to help if pasture quality drops off and have found that the hinds respond well to magnesium and calcium.”

There’s been experimentation around hind and fawn management in the lead-up to milking. This season some fawns were weaned in February and hand-reared, while others were taken off the hind for a few hours during milking. The shared milking arrangement sounded good in theory but in practice separating the hind and fawn, even though for a short time, created problems in the milking shed.

“The hinds were more difficult to handle because of their mothering instinct. We know that they’re a lot more relaxed once the fawn is weaned and forgotten about which is much the same with how it is with a dairy cow.”

Based on this season’s findings Mark thinks the best system will be to introduce high-protein meal to the fawn while still on the hind, then wean the fawn at 20-25% of their mature body weight for shed rearing.

“It’s much the same system used for dairy calves where they are weaned off milk on to meal at 20-25% of their mature bodyweight. They grow just as well if not better than being on mum.”

Another future development will be the conversion of a specialist milking unit elsewhere for up to 500 hinds.

“We already have 400 hinds for next season that are trained, production-checked and ready for milking.”

Mark also hopes that a turnkey-type package will be developed for people keen to diversify into deer milking, detailing how to go about a conversion and where to source the appropriate expertise and inputs.

“We’re confident that we can make a commercial and sustainable business from milking and we see it as another way of adding value to a deer farm.”

Getting deer into the yard once a day is a world away from the annual yarding of deer at Minaret Station.

“We had huge 800ha blocks and the deer were run in a natural almost free-range system. We got them in only once a year but it worked and we got results,” Mark says.

He was the first manager at Minaret following purchase of the property in 1995 by the Wallis family business. He had previously worked for Tim Wallis in the mid-1980s on Mararoa Station, a large-scale breeding farm in the Te Anau basin. After leaving Mararoa, Mark worked in the Otago and Canterbury high country before farming deer on leased land in Geraldine owned by his mother. He then took on the development challenge at Minaret along with his late wife Leslie.

“It was a great place to work and the thing about Tim was that he never worried about what went wrong; he concentrated on what went right. He was very visionary.”

That big picture and often against-the-grain thinking struck Mark on his first helicopter ride around Minaret with Tim.

“Tim’s idea was that we should ring-fence the 50,000 acres for deer first up. It was feasible but it would have taken forever given the terrain… But that shows his big and visionary thinking.”

In the end the deer fencing started from the homestead blocks outwards and during the 10 years at Minaret about 200 hectares of fencing was marked out creating a 4000ha deer farm.

After leaving Minaret, Mark came to South Canterbury and entered an equity partnership, Lindale Farming, with Graham Carr of Peel Forest Estate. At the start Lincoln Hills was used solely for deer breeding and another farm, Bishopdale, for weaner finishing. That changed in 2010 with a 300ha dairy conversion at Bishopdale. The remaining 200ha was left for dairy support but converted to dairying in 2015, creating a two-shed and 1850 dairy business.

Mark played a hands-on role in the dairy conversions and it was during the second one that Graham mentioned being approached about the possibility of milking deer.

That enquiry and Mark’s growing confidence with dairying motivated them to take the concept further.

“It got to the stage where we thought why not give it a go and milk them.”

Even though, Mark admits he was sceptical given the bad memories of trying to bag off hinds and often being kicked in the process.

Mark and Cindy paid a visit to John and Mary Falconer in the Maniototo who had successfully milked deer on a small scale. The Falconers weren’t interested in further pursuing the experimental project leaving their self-taught deer milking manager Di Herron without a job.

Mark and Cindy saw the opportunity and employed Di to help get the deer milking venture off the ground.

It was a lot of hard work at the start.

“We initially put in huge hours trying to find deer we could potentially milk and train to walk into the stalls. We were continually making alterations to come up with a better way.”

In 2016, Di’s partner Simon Wakefield was employed as a tractor driver but after helping with milking became hooked on the new venture and is now a key member of the team.

The deer milking side of the Lindale Farming Partnership was separated off in 2015 into a separate company Deer Milking NZ Limited, owned by Mark and Graham.

Consistently milking more than 100 deer is a huge achievement but working out how best to add value to the milk is a costly and still-evolving process.

Deer Milking NZ has invested in testing at the Callaghan Institute to identify the composition and unique qualities of deer milk which has revealed numerous health-giving qualities.

“The scientists are excited about it. They’ve found that it has bioactive lipids that have a number of health benefits and that from a composition perspective is very similar to human milk.”

It’s being used in Havarti and Gouda cheese produced locally by Talbot Cheese in Geraldine, who also developed the pasteurisation protocol for deer milk. Some is also being supplied frozen to a company for use in cosmetics.

Developing the milking of deer to a commercial-scale business has been a true team effort.

Mark and Graham have complementary skills that have been put to good use.

“Mine is getting the milk into the vat, whereas Graham is good at following through with the R&D side of things.”

Di Herron is another crucial player having pioneered the actual cupping up and milking of deer. But she also has extraordinary deer handling skills.

“We’ve had the odd occasion where we’ve had to hand rear a fawn; others will try to get the fawn to take a bottle and fail whereas Di always manages to get them drinking. She has the knack and really enjoys what she does.”

Cindy, a rural secretary, is an avid and active supporter of the venture who sorts through the endless red tape and helps out with the administrative side of things.

There’s a Facebook page ‘The Deer Milker’ that tells the story of deer milking at Lincoln Hills, and updates followers with what’s happening.