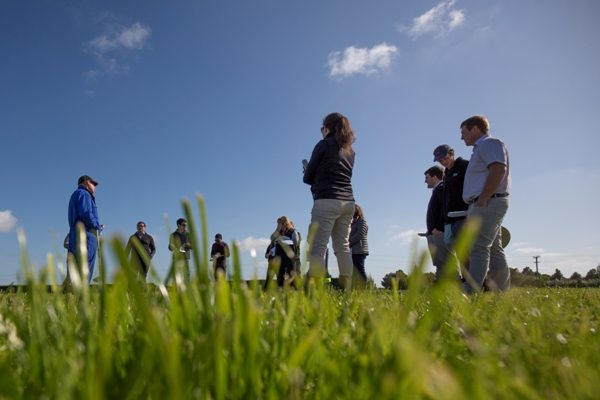 Changes to pasture management and mating systems have made significant changes to milk flow so far this season on Lincoln University Dairy Farm. Anne Lee reports.

The Lincoln University Dairy Farm (LUDF) has, like many others in some regions of the country, had an exceptional start to the season.

A mild winter and spring have been major contributors to increased milk production thanks to the ability to utilise good pasture growth.

But so too have decisions made more than a year ago, leading up to mating, as well as decisions made in autumn when it came to grazing the last round.

A tighter, earlier calving has meant more cows (88%) calved by the end of August, boosting the amount of milk flowing into the vat at the outset of the season, and a decision to drop the average pasture cover at dryoff to 1900kg drymatter (DM)/ha has meant pasture in the first grazing round has been high quality.

By the end of September, the farm was 54% ahead on production compared with the same time last season and by mid-October was sitting at 34% ahead.

The farm’s manager, Peter Hancox, hosted open farm walks in mid-October in lieu of LUDF’s traditional focus day, partially so as not to compete with the Pasture Summit being held in November (www.pasturesummit.co.nz ).

He says paddocks were grazed hard during the last round with residuals even and down at 1500kg DM/ha, resulting in winter saved pasture being high quality.

Pasture quality tests through spring have consistently been around 13 megajoules of metabolisable energy (MJ ME)/kg DM.

Lowering the average farm cover by about 200kg DM/ha to 1900kg DM/ha at dryoff aimed to overcome pasture quality issues in the first grazing round that had resulted from starting the new season with an average cover higher than 2600kg DM/ha.

Good growth rates through recent winters have mainly been a result of milder conditions but a greater proportion of the farm is now sown in more winter-active grass varieties – particularly the tetraploids and hybrids such as Shogun.

Even with the lower cover at dryoff requiring a growth rate of 11kg DM/ha/day to achieve the target 2600kg DM/ha, this year’s mild winter saw the farm grow an average of 17kg DM/ha/day through June and July and an opening season average pasture cover of 2670kg DM/ha.

Unlike last season’s wet spring, which made utilising pasture difficult, this year’s excellent spring conditions meant cows were able to make full use out of what was offered.

That had in turn meant no supplement was fed to milking cows through the spring at all.

The previous season’s winter was wet.

By early October this season the farm was on a 25-day grazing round and cows were eating about 19kg DM/cow/day, going into pre-grazing covers of 3200-3000kg DM/ha, Peter says.

Although pre-grazing covers were up to 3400-3600kg DM/ha by the end of the first round, the predominance of tetraploids and hybrids in the sward and the previous lactation’s grazing management meant quality wasn’t reduced significantly.

Quality assessments even into the second round were showing relatively high drymatters at 17-19%.

That meant platemeter readings, calculated on 15% DM, needed to be monitored against cow behaviour to ensure allocations were accurate to support peak milk production on pasture alone.

Peter had used the mower pre-grazing twice by mid-October and had also mown behind the cows twice to maintain quality after rain events meant residuals weren’t quite hit.

“We’re trying to get 500-520kg milksolids (MS) out of these cows and if we got them to achieve a 1500kg DM/ha residual every single grazing we wouldn’t be able to achieve that production.”

Pasture quality had to be high and conditions dry enough for pre-graze mowing to be effective.

Managing quality through late spring and early summer, when grasses were trying to head, was important not just for milk production but to maintain intakes of high-quality feed through mating.

Some of the winter active grasses also struggled more in the heat of summer and it was important now to make sure they were set up as well as they could be – at even, 1500kg DM/ha residuals.

Peter says given indications are for a hot, dry summer, being extremely disciplined now is particularly important.

“But the way the season’s gone you couldn’t really ask for a better one,” he says.

The only thing marring the great start has been an increase in mastitis cases, with a Staphylococcus aureus infection now identified as a culprit.

The early season spike in mastitis cases initially proved hard to treat, creating a sense of nervousness given it can be a sign of Mycoplasma bovis.

But culturing of the bacteria showed the infection, thought to be Streptococcus uberis, was in fact Staph aureus and a change in antibiotic treatment for clinically infected cows has since proven effective.

Peter says the late September herd test found 27 cows with somatic cell counts (SCC) greater than one million cells per millilitre and 22 cows with SCC counts of more than 500,000c/ml.

Of the 27 cows, 16 were diagnosed with Staph aureus infections.

The bacteria had never been identified as a problem on the farm before and Peter suspects that a high empty rate restricting the ability to cull cows has meant in-calf, higher SCC cows have been carried through.

In line with suggested best practice, and as a way to help combat antibiotic resistance, the farm moved to a dryoff policy at the end of the last lactation that meant only cows over a threshold SCC received dry cow therapy, with the rest receiving teat seal only.

Out of 440 cows wintered from the main herd, 120 were treated and the remainder received teat seal only.

But that wasn’t responsible for the increase in mastitis cases.

Peter says all the cows with the infection were among the higher SCC group.

Mastitis cows, even those cycling early, will be artificially inseminated (AI’d) to short-gestation Hereford with the high likelihood they would be culled at the end of the season.

The risk of Mycoplasma bovis has pushed LUDF to a no-bull mating policy this season and, for mating heifers being grazed more than 70km away, it will mean an intensive CIDR programme.

Previously the farm has used a progesterone (PG) programme successfully followed by bulls with 67% of heifers in calf to AI.

The CIDR programme involves three to four rounds of CIDRs with the first round inserted on October 2 and removed a week later on October 9. Three days later all 140 heifers were AI’d.

The process was then repeated to enable mating again three weeks from the previous insemination.

It involved all heifers being CIDR’d again but instead of AI’ing every animal, mating was carried out based on visual heats.

Some of these may be in-calf to the second insemination but there’s no way of knowing that.

Insemination for the third round will again be done based on visual heats.

A fourth round is possible but Peter is hoping it can be avoided because it would be scheduled for December 12, pushing those heifers well into the main herd calving period.

The aim of heifer mating at LUDF has been to have them calving well before the main herd to give them more time to cycle before their second mating.

The planned start of calving for the heifers will be July 16.

Peter says the plan for this year’s heifer mating had been discussed at the end of last season and, given the risk of a higher empty rate in the heifers because of the no-bull policy, 35 young empty cows were held over as carryovers.

They’ll go through the same CIDR programme but will only have two rounds.

Cows all AI – no bull

It’s no secret LUDF has struggled with empty rates and last season’s mating was no exception at 19% empty.

However, indications are that last season’s plan has worked to condense calving and, based on this season’s premating heat detection, the hope is for further improvements.

Peter says 87% of the herd cycled in the third week before planned start of mating, which is an average of 23 cows per day and double the rate of the previous year.

The aim last season had been to bring mating forward to give cows more time to get back in calf and that’s been achieved with 88% of the herd calved by the end of August this year, five weeks into calving.

Mating usually began on October 25 to give an August 1 planned start of calving but last season mating started a week early.

The farm was part of a frozen sexed semen trial for the first week with 70 of the 143 cows put up for mating then inseminated with sexed semen.

This season’s mating plan with no bulls.

Peter has used pre-mating heat detection as a way to train staff for heat detection duties during mating so they can step in towards the end of mating to relieve him.

The farm uses no intervention on the main herd and the farm has never used induction.

Cows were metrichecked twice with 33 cows treated from the first check and nine treated in the second.

With cow condition holding well this year after calving, high quality pasture and cows cycling exceptionally well the LUDF farm team is hoping this is the year mating results improve and that the no-bull programme doesn’t stymie that.