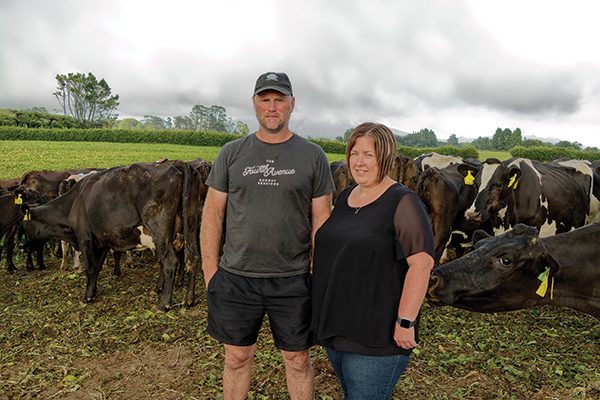 Renewing fences and improving cow flow is paying off on the Blands’ Taranaki farm. By Jackie Harrigan. Photos by Ross Nolly.

Greg and Amanda Bland have made a concerted effort to reduce their incidence of mastitis and somatic cell count numbers during the three years they have been farming their Tariki dairy property.

The Blands have owned the farm for the past three seasons and have undertaken major improvements over that time. They went from a larger farming business and staffing issues to owning their own smaller, but rundown farm, so they could take control and work the farm all by themselves.

“As we have started to tidy things up on the farm, our cell count has been coming down, and we are curious to see how low we can get it and maintain it.” 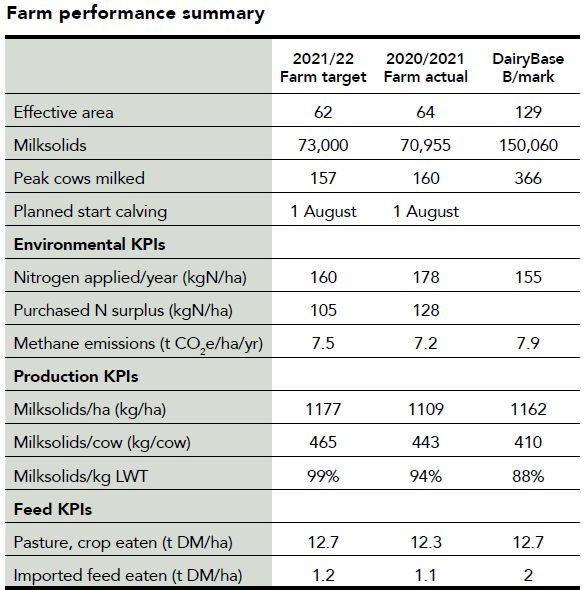 The biggest change to make for the cell count was removing four sets of cups and shortening up the pit, Greg says.

The cows just did not flow well in the shed as it was with 26 sets of cups, with not enough room leading into the herringbone shed.

Now with the 22 sets of cups and more room, cow flow has improved, milking time has decreased by 45 minutes which has reduced overmilking and the somatic cell count (SCC) has dropped from 90,000 cells/ml to about 30,000 cells/ml.

Under the 150,000 cells/ml mark the Blands earn the Fonterra Co-operative Difference premium for milk quality excellence but they aim to keep it much lower than that.

But Waikato expert mastitis veterinarian Steve Cranefield, who spoke at the December 2021 SMASH field day on the Blands’ farm, says there is always a balancing act with cell count.

“Below 100,000cells/ml is great, but low cell count can also mean a low immune system, and you can still get clinical mastitis.”

Improving the cow flow made milking a much more pleasant activity, Greg says, and adding an automatic teat spraying station helped with speeding up the milking and ensured the cows’ teats were properly treated every milking, which also aided in reducing mastitis.

Admitting he is a great advocate of TradeMe, he says he picked up the Wettit sprayer unit for $4000 ($13,000 for a new one) and a quick trip to the Manawatu where it was removed from a decommissioned shed.

“We use about three times as much spray, but it’s good to know each cow is being properly sprayed.”

Cranefield says teat-sealing the heifers works really well, and in the cow herd, teat sealing should be used, but he has worries about the amount of whole herd dry cow therapy used as antibiotic resistance is growing. (see side story)

“Teat sealant is a great physical barrier, and it has anti-microbial properties. Sometimes you have a look up the teat at calving and you can’t see it – sometimes the sealant is absorbed up into the udder or the calves suck it out.”

The Blands milk their colostrum cows twice each day, and they are out of the herd for eight milkings.

“We try to teat spray them before milking, but that often goes out the door as we get busier in the season. But we make sure we do spray them after milking.”

On the discussion between OAD and TAD for colostrum cows, Greg says OAD reduces stress on the cows and is easy for management but there is a trade-off with SCC increasing with OAD and that means milking has to be done very well with particular care taken with pre- and post-milking teat spraying.

Greg tests each colostrum cow with his Draminski conductivity meter before she goes into the herd. The conductivity meter measures changes in the electrical resistance of milk, as development of sub-clinical mastitis (asymptomatic stage) is accompanied by an increase in salt levels in milk, which shows up as a change in the resistance.

“It’s a reasonable indicator but I always go back to the RMT (paddle test) where the detergent coagulates if there are white blood cells present and the sample goes thick – as confirmation of an infection.”

The other advantage of teat spraying before and after the colostrum cows are milked TAD is that it’s a good chance to clean the teats up, when they are often dried and cracked after winter.

Water quality is important for mixing up the spray, Greg says, and he likes to add emollient, saying glycerine is best for their operation.

When the bulk tank SCC for the herd hits over 50,000 Greg says he knows there is something wrong.

“Usually it’s one cow that has had a massive spike. “

Once he has identified the affected cow she is put on to OAD and has five treatments for the infection.

If she is a repeat offender and gets mastitis two or three times he culls her from the herd or sells her to a mate to rear calves on.

Development of the farm is ongoing for the Blands, with fences that were “had it “ and lots of small paddocks and short races.

“We are slowly pulling all the fences out and refencing,” Greg says. The races are also in poor order and will be the focus of investment in the next few years.

“We know they need work, but in the meantime, we let the cows do their own thing and pick their track for walking – the important thing is to not push them.”

Checking out your teat ends

Farmers should be taking time to assess the condition of their cows’ teats once every month, says expert mastitis veterinarian Steve Cranefield.

He told Taranaki farmers at a SMASH field day in December that examining 50 cows each month for teat skin condition and teat end damage is a good way of picking up any early indications of problems.

The target is for over 95% of the teats to be supple and over 90% free of teat end damage, or farmers should look to rectify the possible causes or seek expert advice, as these problems are precursors to mastitis.

If teat skin is dry the fatty acid layer is lost and bacteria will multiply in the cracked skin.

“It is critical to achieve good teat condition in your herd all year long – it requires the addition of sufficient emollient and full coverage of all teat surfaces at every milking all season.”

Along with cracking, teat ends can be damaged from the physical action of the miking machine allowing bacteria to grow and enter the milk canal. Monthly teat monitoring will identify the teat ends as normal, rough or very rough/cracked and then action taken to undo the damage and minimise further cracking in the rest of the herd.

Working with milking machine experts, or expert mastitis vets, to investigate the former is important, while the MaxT programme (maximum milking time) will help limit over-milking.

More than 500 New Zealand dairy farmers are using the programme, which sees each cow being milked for a predetermined fixed time or to a set milk flow rate threshold, whichever comes first.

At this point about 80% of cows would have completed milking and the clusters are removed from the remaining 20%, deferring their residual milk to the next milking.

Research shows the implementation of MaxT can increase the number of cows milked per hour, shortening milking times, with no loss of milk yield and no increase in mastitis or somatic cell count.

Staph aureus: Is it the big bugbear?

You have Staphylococcus aureus in your herd? So do 85-90% of herds so don’t panic, says expert mastitis vet Steve Cranefield.

Although the bacteria can cause the severe form of black mastitis, where the udder goes black and starts to rot, and these cows need to leave the farm as quickly as possible, generally Staph aureus only shows up in 0.5% of cows at dry-off.

“Most people have the bacteria in their nostrils and the bug is present on most farms,” he says.

“It tends to spread from cow to cow through infected milk, via the liners at milking, where the bacteria become lodged on the surface of the teat skin. But if teats are in good condition and teat spraying is thorough, the rate of spread is very low and the bug is easy to control.”

Staphylococcus aureus needs to be managed, not removed, Cranfield says.

“In herds where teat spray is applied routinely after milking, about 10,000 quarters are milked before a new quarter is infected.”

If cows have Staph aureus, Steve says long-acting dry-cow antibiotics should fully cure about 65-70% of cases.

“Most cows deserve the opportunity to cure during a dry period.”

Cows should not be culled based on a single Staph aureus culture result, he added, but culling was appropriate in the following cases:

Minimise the risk of Staph aureus in your herd:

Steve says there are two key elements to controlling mastitis:

Infected cows are the source of infection for other cows during lactation.