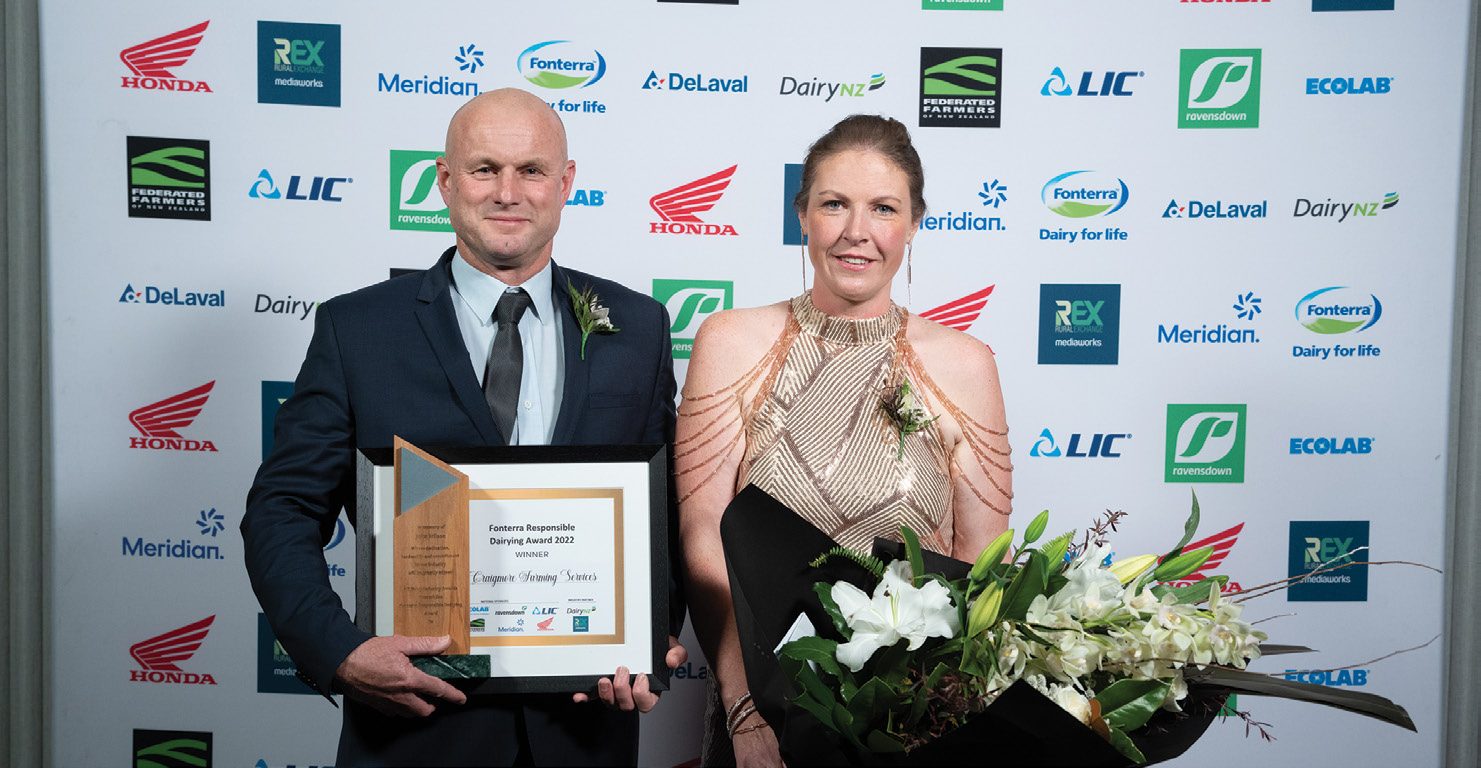 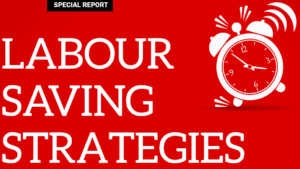 Craigmore Farming is trialing a number of them, Halter cow management, 10 in 7 milking and the SmaXtec bolus to name a few.

They’re saving labour and not just labour saving because they’re freeing people from repetitive or less enjoyable tasks, relieving pressure and giving people more time to do other tasks better – tasks that improve productivity and create returns in terms of profit, environment, cows and people.

The company’s efforts towards sustainability across the spectrum of environment, people, cows and profit were recently recognised in its win of the Fonterra Responsible Dairying Award and the John Wilson Memorial Trophy.

Craigmore general manager of farming Stuart Taylor says the company, which has 22 dairy farms and 17,000 cows as part of a wider primary sector portfolio, has a philosophy of purposely being a first-adopter at the commercial scale of new technologies.

“We believe it’s our responsibility to try and create solutions for the New Zealand dairy industry.

“We can spread the risk because we can trial a technology on just one farm or use it for part of a season.

“Then we share what we’ve learned – that’s going to make it easier for others to take up,” he says.

“We’re doing it in a way that’s ‘safe to fail’ – and that’s a strategy that can be good for others in the industry too, regardless of size.

“When you have a dairy business, you can’t risk everything on a new technique, so if you can do the small, safe-to-fail trials – trying different things on a part of your farm, with one herd or for part of the season – that allows you to get comfortable and gain some knowledge and experience with it.”

Craigmore agri-relationship partner Caroline Amyes says they’re also led by their people when it comes to bringing an innovation onfarm.

For instance, they’re not going to push a technology that makes a lot of data available on a manager who isn’t that way inclined.

“Our people and the farms are all different, they each have unique attributes so we’ll look at a technology that’s going to make a difference to a particular need on a particular farm and make sure it’s aligned with the manager’s way of working – their passions as well, because they’re the people who will work with it and get the most out of it,” she says.

Craigmore’s farms are located from North Canterbury to North Otago with only one, near Geraldine, operating without irrigation.

The company has been replacing K-lines, Rotorainers and long laterals with pivot and fixed grid irrigation which can be a significant time-saver, freeing up staff from the time-consuming process of shifting them.

“There’s the people aspect and there’s also the win of better water use efficiency that gives you better pasture production and the environmental gains – you don’t get a lot of those triple wins so that’s something we’ve been investing in,” Stuart says.

“We’ve been installing those systems over time, starting with the farms that might be a little under-spec’d in terms of shed size for example.

“It’s not necessarily about reducing the number of people onfarm permanently, it’s about making it possible to operate these farms with fewer people at specific times – so reducing the pressure when we have people off for holidays for instance.”

It also gives some sense of security that, if need be, a farm can be run with just two or even one person if it had to – something Covid has made everyone think about.

This year Craigmore has been trialling Halter on a 500-cow, 40-a-side herringbone farm near Culverden.

The farm’s business manager Matt Redmond had been keen on trialling the new technology which uses solar-powered, GPS-enabled smart collars to ‘virtually’ fence and move cows as well as monitor animal health.

“It’s gone well. The farm sits in between a two- and three-person operation so we wanted to see what the capability of the technology is,” Stuart says.

It’s given the farm team stability knowing the farm can be operated with just one person if needed.

“In the past Matt’s run one herd but he can now run two – it’s easier to draft cows in the paddock, to back fence and have greater control over pasture allocations and management – be more precise.”

He’s using it over winter for managing herds and break-feeding and the team is looking forward to seeing what they can do in spring – being able to manage different herds and draft out cows in the paddock.

“You don’t have people out with reels and standards putting up and moving fences.

You cut down the time people are on motorbikes either out in paddocks or getting cows in so there’s that big time saving but also the health and safety aspect,” Stuart says.

While they’ve already seen significant time-saving benefits from the Halter system, they haven’t reduced permanent staff numbers on the farm.

“You don’t want the technology to fail because you didn’t have the people on the ground while you’re in the learning phase. You want to be able to get the best out of it.

“In the end it may be that it’s not about replacing people with the system but enhancing the people you have, giving them the opportunity to do their job better and getting productivity results from that.

“Every situation and farm will be different, so you need to do a business case for each,” he says.

The company is also trialling SmaXtec bolus technology on a 900-cow farm also at Culverden. The bolus is delivered into the reticulum of the cow and monitors a range of data including internal body temperature, rumination, activity, pH and water intake.

The technology is providing animal health reports and alerts and heat detection, helping the farm team be proactive with early detection of health issues such as mastitis, lameness and milk fever and reducing the time spent overall on treating and managing sick animals.

“It’s meant the manager on that farm has been able to go to no bulls onfarm, relying instead on the technology for heat detection over a 10-week AI period.

“It’s been a massive benefit to him in not having to be on the mating stand every morning, no need to tail paint cows,” Caroline says.

That’s given him time to be focusing on other important management decisions over that time, freeing him up but also helping reduce fatigue.

Labour saving is often thought of as reducing the need for lower-skilled staff but big productivity gains can be made by senior staff and managers with more time to focus on factors such as planning, feed management, people and managing the business.

Moving to a 10 milkings in seven days milking regime (10 in 7) has proven itself on several farms this season, helping to ease pressure on staff, particularly on farms where there are issues such as longer walks for cows or the farm dairy is slightly small for the number of cows or where irrigation has been more labour intensive.

Stuart says about half of Craigmore’s farms have used 10 in 7 for at least part of the season over the last few seasons.

“We have farms using once-a-day milking up till the end of mating and then going 10 in 7 and others just using it from after mating so it’s a flexible tool we can use depending on a farm’s particular situation and what the farm teams want.”

In the initial trial it took a little time to get feed allocation right given the varying milking intervals through the week but that was worked through.

“Going to 10 in 7 at the back end of the season doesn’t have such an influence on milk production and we’re seeing improvements in cow condition and reproduction.

“That will have a cumulative effect so I’d say that, like a number of new techniques and technologies you shouldn’t be too quick to make an assessment on one season alone or one part-season.”

Caroline says the company has had a focus too on building leadership skills in its farm teams and that in itself can be a labour-saving tool enabling teams to get the job done more effectively and efficiently in an enjoyable way.

“Overall, it’s about just doing what you can when it comes to making changes that will improve sustainability.

“You don’t have to go big straight away. Understand your drivers and purpose and make the changes in areas you’re interested in first.

“Some things don’t take any capital at all but can create change for the better,” Stuart says.

“We understand New Zealand farmers are facing a lot of change and pressure.

“As an individual you can’t solve it all. So focus on one area that lights your fire, be the best at that, and then don’t be afraid to share your success.”

vamtam-theme-circle-post
 Category Dairy Exporter
After a career in science a Manawatu couple are using local milk to make a...
 Tags Business, Dairy Exporter June 2022
Read More

A sleep in, even for the cowsThe future is now