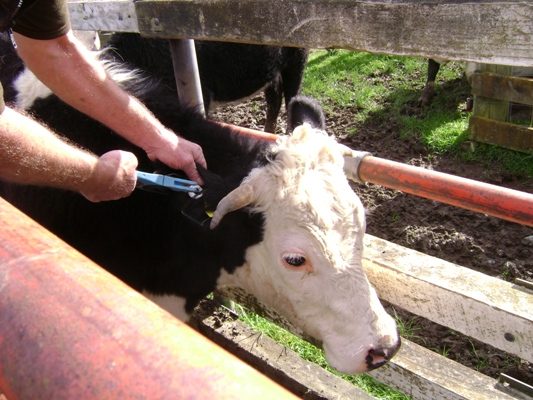 Officials in charge of the Mycoplasma bovis response are failing to use tell-tale identifiers for tracking infected and at-risk animals.

Under National Animal Identification and Tracing (Nait), cattle farmers must insert an electronic ID tag into their stock, before the first movement or within 180 days of birth.

The premise is that every animal has a unique radio frequency identification device (RFID) which can assist in verifying an animal’s movement history.

In the M bovis response, the Ministry for Primary Industries (MPI) requires census scans for all infected herds, and other herds where infection is suspected or a better understanding of cattle onfarm is required.

A livestock auditor familiar with the process says an RFID tag should be scanned, then all other identifiers recorded against the tag details.

A good head bail is required to do the job well so that brass tags and the old Animal Health Board tags can be read and recorded, along with any unique identifiers, known as flag tags.

‘Surely MPI would not want to leave any stone unturned, yet there  ppears to be a riverbed that they are failing to navigate.’

A flag tag is considered as any tag containing animal information and some tag types are more important than others. A management number is only important for an animal in that current dairy herd, but a tag such as XXXX 12-137 (cow #137, born 2012 into herd participant code XXXX) indicates individual animal identity. All tags present are an opportunity for MPI to verify and validate what little information they have about risk animals.

These tags can be used, and until recently, were used in census for M bovis. It’s a thorough and time-consuming process when done correctly. And it’s no longer being done, the source said.

“The fact that lifetime identifiers are no longer being recorded, and that no questions have been raised about why the process has been changed, would indicate that MPI has never identified the benefits of assessing all unique identifiers.”

There are still cattle alive that were born before Nait’s implementation in 2014, so these cattle would have had Nait tags that did not necessarily correspond to the herd they were born into. Older cattle (born before 2014) would likely still have old AHB tags, MINDA tags and brass tags.

“If trace animals have only been looked for using RFID, the lack of robust census data may be at the heart of the oversights. If a list of participant codes or lifetime ID were assessed MPI may find what they were looking for.”

Such oversights were particularly concerning given MPI had just confirmed it had several herds which had no known link to infected properties, the source said.

“Surely MPI would not want to leave any stone unturned, yet there appears to be a riverbed that they are failing to navigate.”

Current practice is merely to record a list of RFID tags, with little recognition of the fact that original RFID tags may have fallen out, and that an animal’s history is no longer easily available.

It could take days to cover a herd in this way. Often the numbers were different: the reason for the discrepancy wasn’t always clear but it gave clues to the locations and people who had crossed paths with these animals. All of this information painted an important picture, but only if someone wanted to understand it. “You don’t go sticking these lifetime identifiers in for no good reason,” the source said.

Federated Farmers president and West Coast dairy farmer Katie Milne said she told MPI early in the M bovis response “don’t forget there is participant codes, and the MINDA system that can be and should be used to help with this”.

‘Surely MPI would not want to leave any stone unturned, yet there appears to be a riverbed that they are failing to navigate.’

If there was no EID (electronic tag) it may have been another way to track the origins of some animals.

“It would have been good that they utilise whatever unique identifiers were in cows’ ears. It seems a real shame that opportunity hasn’t always been utilised.”

Dairy farmers had to be able to recognise their stock instantly by eye, moving at speed. In the field it was often impractical to rely on a wand to scan stock for a 15-digit ID number.

“A visual tag is how farmers do their work, day to day.”

Milne said unfortunately brass tags were becoming a thing of the past, despite being the most reliable for retention in a cow’s ear.

“There are hundreds of thousands of cows that still have these unique identifiers, and once a cow is recorded in this manner in MINDA it stays there for ever. Even when a cow is dead she just has a status change and goes into the ‘historic herd history’ – what used to be called the dead cow file.”

MINDA allowed farmers to retrieve life-time production, calvings and ancestry, for instance. The system also provided a back-up source of herd information in case a farmer accidentally recorded the wrong cow as culled.

The source said it was also essential that farmers keep reliable herd records, including MINDA data. When a “linked” RFID fell out, a farmer should update records and remove the old RFID so Nait and MINDA have the correct lifetime identifiers loaded. “Often this is overlooked, meaning an RFID means nothing.”

MPI M bovis programme director, Geoff Gwyn, said it had a team working solely on the tracing and verifying of animal movements through Nait and other records, including Animal Health Board papers, LIC’s MINDA database, stock trucks, abbatoir and stock records, census lists, and RFID and ear tagnumbers. MPI could, and does, ask LIC for MINDA information, and it does scan tags against current NAIT and MINDA account to reconcile data. MPI also asked farmers for written records and to recall information about historic animal movements.

Not all trace animals had been identified. This was usually because there were incomplete records for the animal’s movements, Gwyn said.

“We are committed to leaving no stone unturned in our effort to eradicate the M bovis bacteria from New Zealand. To do this, we use every available source of information to trace its spread,” he said.