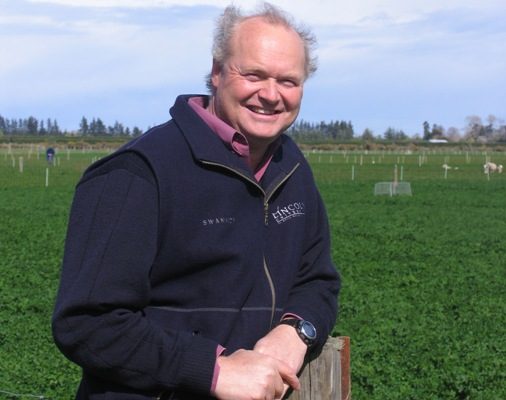 About June last year a couple of dryland farmers told Moot they were getting the advice from environment plan consultants.

‘She got the same advice and I thought ‘this is nonsense. They’re being told to remove high-quality pastures which are legume-based, to use nitrogen fertiliser’.’

Moot said he initially thought it was odd advice but didn’t think much more of it until he heard the same from a farmer irrigating red clover/tall fescue pasture for finishing stock on the Canterbury Plains.

“She got the same advice and I thought ‘this is nonsense. They’re being told to remove high-quality pastures which are legume-based, to use nitrogen fertiliser’.”

Moot concluded the recommended switch is because Overseer runs on the premise that the higher the N source in the feed, the higher the N concentration in urine and therefore the more nitrate leaches.

“And that all makes sense, but it doesn’t account for the fact that lucerne has a root that goes down 2.5 metres, or more. Overseer says anything over 600mm is lost from the root zone, but that’s not true, because I’ve got plants that are five or six metres down. So they’re drying out soil profiles… there’s no nitrogen leaching (there) at all.”

As far as Moot could tell, Overseer was incorrectly indicating the depth of the root zone, and the tool is failing farmers because it has a single focus on nitrate leaching.

“So, we don’t worry about the fact that legumes are fixing nitrogen from the atmosphere for free, versus a highly, industrialised process of producing urea fertiliser, because the single issue that the regional councils are targeting is the nitrate leaching. If you look at the whole package, using legumes is the most environmentally friendly thing there is.”

Moot said the advice was being delivered to New Zealand farmers at a time when Europeans were asking him for advice on how to integrate more legumes including lucerne into their system. “And my farmers who I’ve worked with for 20 years are being told to take it out, because there’s nitrate leaching.”

O’Connor invited Moot to discuss his concerns. Moot said he met the minister but he did not appear to be well advised on the issue.

“It appeared to me that his policy people did not understand the issue – they were focused on reducing nitrate leaching from dairy using Overseer. Given they have funded it and I think have some ownership they were not happy to hear my concerns.”

Moot copied his letter to O’Connor to the Parliamentary Commissioner (PCE) for the Environment, Simon Upton. Moot found out later the PCE was preparing its own report on the validity of Overseer as a regulatory tool.

Upton’s December 2018 report said: “To help build confidence there needs to be more transparency around how the model operates. Any model operates with a measure of uncertainty. That’s normal. The question is whether the level of uncertainty is an acceptable one. “

Upton’s report concluded regional councils could continue to use Overseer while improvements were made but they needed to be aware of its limitations. The review made these recommendations for government action:

Moot said he had also outlined his concerns to scientists involved in Overseer “but they hide behind their comments that Overseer should not be used in a regulatory context – despite knowing it is.”

Moot copied his letter to O’Connor to Environment Canterbury but the council didn’t respond, he said.

In response to Countrywide, the Office of the Prime Minister’s Science Advisory Committee said it also received Moot’s letter but investigating Overseer was not part of its work programme  “The Parliamentary Commissioner for the Environment has recently released a report on this, so may be better positioned to comment,” a spokesman said.

Overseer’s owners say they have listened

Overseer’s owners, the Ministry for Primary Industries, AgResearch and the Fertiliser Association of New Zealand, were “working through how to best implement the Parliamentary Commissioner for the Environment’s recommendations about Overseer”, MPI director of environment and communities policy Charlotte Denny, said.

Overseer Ltd had also taken Moot’s “technical concerns” on board, she said.

“Overseer’s handling of deep-rooted crops, including lucerne and other crops like maize and chicory, are the focus of discussions Overseer is holding with a range of experts. We expect and hope that Professor Moot will contribute to this process.”

vamtam-theme-circle-post
 Category Country-Wide
Being the husband of a farmer’s wife has taught Paul Burt some valuable lessons. Thankfully,...
Read More

Working with cunning plansMaking the most of milk