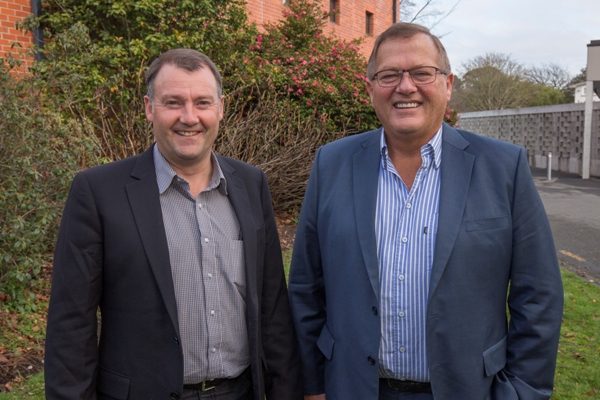 Farmers and rural professionals were treated to what you could call a master class in low-cost, pasture-based dairying at the South Island Dairy Event (SIDE) earlier this year when Dairy Holdings Ltd (DHL) principals Colin Armer and Colin Glass took to the podium.

They’re also the major shareholders in DHL which owns 75 farms in the South Island totalling more than 18,700ha.

Glass is chief executive of DHL.

Quoting Armer when he said “We may be miserable but we’re happy about it,” Glass pointed to the culture which prevails within DHL of keeping tight control on spending and limiting investment in depreciating assets.

Money is spent where it can best give a sustainable return and earnings before interest and tax (EBIT) is the shining light when it comes to key performance indicators (KPIs).

‘We may be miserable but we’re happy about it.’

While he understood feed costs had dropped further through the 2015-16 season the actual volume fed had not declined comparatively.

“Have we lost our way as an industry?” Armer asked.

“When the downturn came we had an industry that dropped its fertiliser costs significantly but kept buying feed.”

The DHL and Armer Farms strategy was to maintain soil fertility at optimum levels so they could grow as much high quality pasture as they could and harvest it with cows set at the optimum stocking rate without reliance on bought-in feed.

That stood regardless of payout.

“You have to be very careful doing marginal analysis when it comes to feed. When you put more in a whole lot of other costs can go up too – machinery, labour, R and M (repairs and maintenance),” Armer said.

Glass said the group’s strategy when it came to supplement was to stock the farms appropriately and use other tactics from autumn to match feed demand and supply other than bought-in feed.

“We find we can have a big impact on reducing the amount of feed we put into the farms by the operators having the confidence it’s available if absolutely necessary but asking them to defer the decision on whether to put it in until the 11th hour,” he said.

They have to ask themselves how much do they really need – have they put all the disciplines in place, have they tried other tactics first?

That kind of thinking also drove other behaviours with onfarm spending.

“It’s a powerful tool. When you monitor and record the data and put it back out to people – then it starts people thinking. No one likes to be at the bottom of the list,” Glass said.

“We have a group of farms in each region so you see quite quickly which farms are harvesting the most pasture in the region.”

The group invests along the supply chain owning its own support blocks, investing in supplying co-operatives such as fertiliser companies and its processors – Fonterra and Westland Milk Products.

“If you look around the world most people who milk cows are the peasants – the value is captured in other parts of the supply chain. We know if we become focused on only one part of the supply chain then that can effectively result in leakage in value,” Glass said.

Onfarm the group has detailed policies for its operators and staff.

“The policies are all about making it simple and reducing the number of decisions and distractions we have onfarm,” Glass said.

Typically, the animal health spend is $35-$40 per cow on the North Island farms, Armer said.

They dry cow therapy half the herd and spend money on pregnancy testing, mastitis control and teat spray, Armer said.

The spend on mastitis tends to be strongly linked to management ability.

“That’s generally resulted in a 9% empty rate but last season, like a lot of people that went up – it was 13% for us,” Glass said.

The North Island farms are generally simple in terms of infrastructure and have very little machinery so depreciation is very low.

Regrassing is kept to a minimum with the focus on ensuring anything inhibiting pasture production such as fertility and drainage were rectified.

“As long as pastures are grazed well, the fertility and drainage is right and they’re not pugged we’re just not seeing the benefit in spending money on regrassing,” Armer said.

He shared the budget details for three farms and said they’d cemented their farm working expenses in under $3/kg MS.

In 2015-16 they’d managed to produce an economic farm surplus of about $1200/ha despite the record low payout.

In the South Island costs were slightly higher thanks mainly to irrigation – both the standing charges relating to water and depreciation in the infrastructure.

Glass said DHL had invested and positioned itself over time to ensure its irrigation costs were between $250-$300/ha/year.

Investing in people and providing them with a progression pathway in the business is a key strategy of the group and good for both parties.

Helping operators with their people management skills also pays off.

“We consistently find the people who are the superior employers, their people stay in the business and progress and grow but their farms are also the most profitable,” Glass said.

No longer is it just about producing milk at low cost, it’s also about doing that with a low nitrogen footprint too, DHL chief executive Colin Glass says.

“So much of being able to do that revolves around our ability to harvest pasture in the spring. It’s not about production during the at-risk periods later in the season,” he says.

The farming system used by DHL and Armer Group arguably fits well with the modelled losses in terms of reducing stocking rates at the at-risk periods over autumn.

Armer says in the North Island the farm system means the group’s farms are among the lowest in terms of nitrogen leaching.

“For the next 10 years we’ll meet the requirements but beyond that it might be more challenging.

“I’m pretty confident though that what’s good for profit is also good for the environment, especially around harvesting a lot of grass through an animal at the right time of the year,” Armer says.

Glass agrees and urges farmers to look more deeply at their Overseer report and the inputs.

The final Overseer number for nitrate loss was hugely influenced by irrigation inputs and farmers should look at the water – in terms of millimetres – it says is going on.

“I can have someone do an Overseer budget for a farm that could give me 800mm and one that could give me 200mm applied and both are compliant with the protocol but the number that falls out of that will be significantly different.”

He urges farmers to look at what the models indicated in terms of opportunities to reset their farm systems.

“When you get past all the noise around the number – there’s a lot of valuable conversations to have about where it means you should be setting your farm system.”