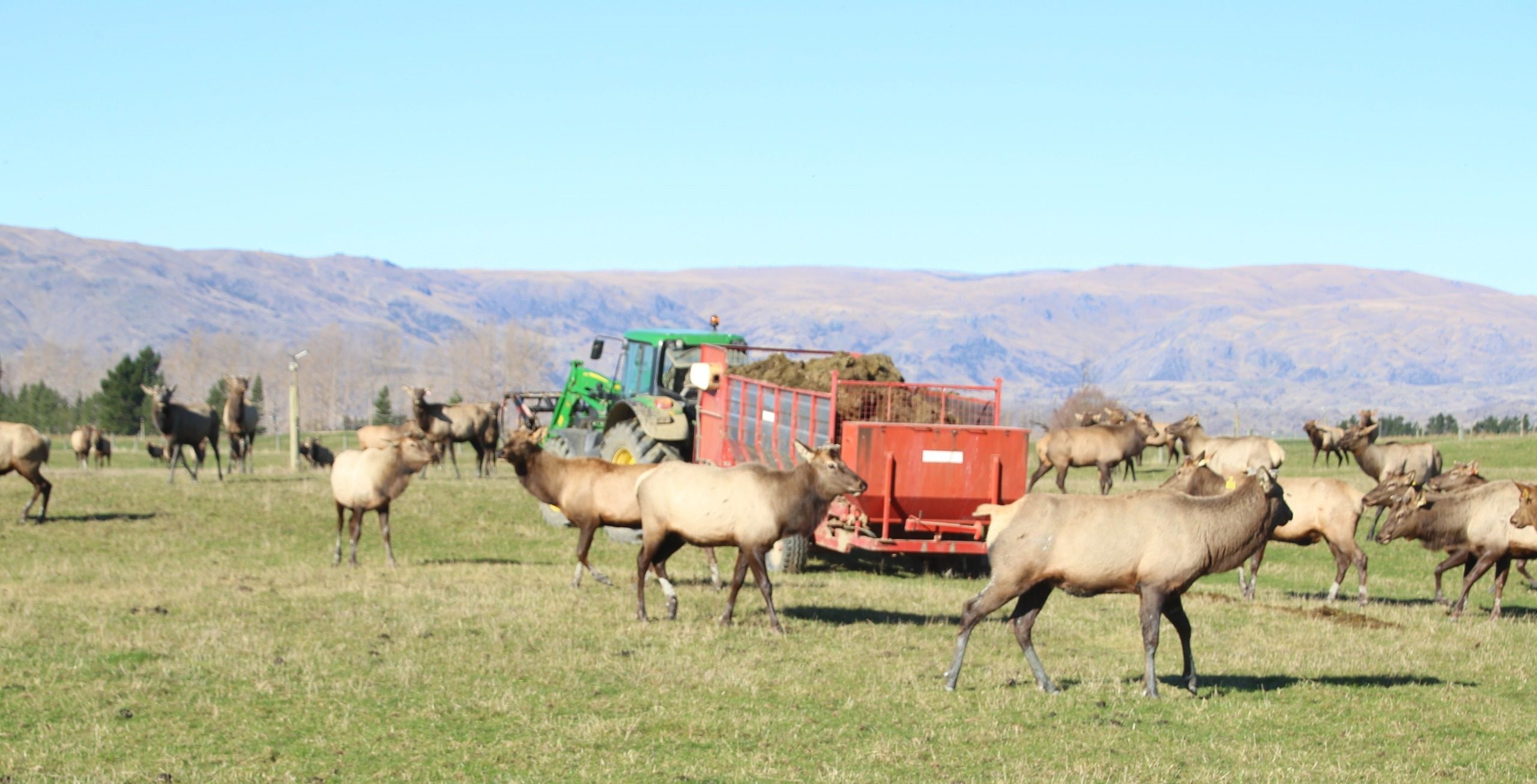 Lifting, chipping and winter feeding with lucerne silage is the next chapter in fodderbeet feeding of deer at John and Mary Falconer’s Maniototo farms.
This year about seven hectares of the total 70ha crop will be lifted, chipped and carted for feeding to hinds as well as sire and trophy stags on the rougher foothill country at Clachanburn.
A beet bucket will be used to lift, depending on the weather, a week to 10 days of crop at a time. The beet will be put through a diesel-powered beet chipper and mixed with silage for feeding from a silage wagon.
Carting and feeding a tailor-made diet of beet and silage, as well as grazing the crop in situ should create a more efficient feeding system with less waste, John says. A good example is the small mobs of velvet and trophy stags who used to share and graze five strand hotwire subdivided beet paddocks. There was a lot of wastage and on top of that was the hassle of shifting of the breaks. Feeding the smaller mobs the chipped beet on the lower hillcountry will be a lot easier.
“I think that spreading some of the mobs on the hill will improve utilisation of the crop and reduce the potential for mud, but it should also be easier on the animals because they’ll have good access to shelter.”
In the past, weaners and stags transitioned on to beet over three weeks with access to a run-off paddock. The system worked well enough, although the two and three-year-old stags, familiar with the crop from the previous year, tended to gorge themselves. It was difficult to regulate because of the hassle of break shifting and led to a few cases of acidosis which John is keen to eliminate.
This year the transition time will be extended and based around the feeding of chipped beet and silage from mid to late May until moving onto the crop around Queen’s Birthday weekend. The new management should give the deers’ rumens more time to adapt to digestion of the crop and reduce the likelihood of acidosis.
Transition issues aside John is convinced that the lifting of fodder beet for feeding to sheep, beef cattle and deer will catch on.
“I believe that over time we’ll see more lifting of beet for feeding, rather than bulk feeding and grazing of the crop because of environmental, animal welfare and ultilisation benefits.”

This year’s crop is a mix of medium to high drymatter varieties SFGitty , SFLifta, and SF1505. The beet was precision drilled at 90,000 seeds/ha in early November with 250kg/ha of Ravensdown fodder beet fertiliser. Escolta was sprayed on in early February and mid-March. It’s the second season the fungicide has been used and it’s led to a huge improvement in leaf health.
“It’s been a game-changer. It keeps the leaf healthy through the autumn and means there’s extra growth and quality feed into the winter.”
Weeds are controlled with two sprays of Quattro, 12 days apart.
He used to worry about the size of the beet but now pays more attention to the size of the weeds and when to spray.
“You have to hit them hard and if you take short-cuts, you’ll struggle with them for the rest of the season.”
Quattro and DAP are applied by helicopter to avoid soil compaction and plant damage.
“We’re growing nine plants to the square metre and I want to maintain as high a plant population as possible, because the loss of one plant makes a big difference to the yield.”
The crop is irrigated during establishment with roto-rainer and K-line irrigation. The crop yield varies from 18 to 26 tonnes and costs about $1800-$2000/ha to grow.
“It’s expensive on a per-hectare basis but for me it’s about the cost per kilograms of drymatter and for us in our system fodder beet works.”
This year’s 70ha will be grazed from the week after Queens Birthday until the end of September by 2700 weaners as well as 470 red stags and 400 elk bulls.
The area is evenly split between the two farms. The Clachanburn crop is for elk stud, trophy and velvet stags. At Loganburn, a 20-minute drive from Clachanburn, the crop is for hybrid weaners and red velvet stags.

A lot of rot

Fodder beet is grown throughout Central Otago and generally performs well, although some of the low drymatter varieties are struck by bulb rot caused by repeated hard frosts. The Falconers used to grow low drymatter varieties’ but when bulb rot struck crops leaving them short of feed for weaners, they changed to higher ones.
A trial at Clachanburn as part of the Central Otago Advance Party that John belongs to, confirmed the higher tolerance, yield and longer life of the higher drymatter varieties in hard frost conditions. For the trial two rows of three different cultivars – low medium and high drymatter varieties – were sown side by side.
The higher drymatter variety looked much the same as the lower one but yielded an extra three to four tonnes. This was significant given that all varieties cost the same amount to grow. The big benefit from John’s perspective was that the higher dry matter variety maintained quality until mid-September.
“When your fodder beet crop goes mushy after four to five days of 8 degree frosts it’s scary, especially when you have 1000 weaners to feed.”

The Falconers were one of the first in the region to start growing fodder beet, trialling a 12ha crop of Brigadier in 2009 to compare yield and feed quality to the swede crop traditionally fed to Clachanburn deer.
There was no precision drill available locally, so John used his Aitcheson direct drill sowing 90,000 seeds/ha. The first crop yielded 7t DM/ha more than what the swedes would have with the same amount of water and fertilizer convincing him that the crop was a much more cost competitive option.
Interestingly the cost of the seed has stayed much the same, which doesn’t add up in John’s mind.
“We paid $367/ha in 2008 when it was in short supply. Since then the area grown has increased hugely and the seed is readily available which I thought would have reduced the price but this year we paid $370/ha.”
Since the first crop there’s been continual developments around the management of the crop.
“We put on a ridiculous amount of fertiliser in the early years, but we’ve learnt a lot since then. The success boils down to getting it in the ground early, feeding the leaves, and weed control.”
Six years ago, year the Falconers bought an Inodecker pneumatic precision six row seeder which means the crop can be sown when the conditions are ideal rather than having to wait around for a contractor. It’s been used for kale and swedes but the yields of neither got close to the fodder beet, and on top of that was the aphid and insect strikes which are never a problem on the beet.
John says he’ll stick with fodder beet because it’s ideally suited to their system, which is constrained by a lack of area for winter feeding.
They have 300ha of paddocks to winter 15,000 stock units which need 1400t of brassica-type supplements.
“I couldn’t do that without fodder beet.”
He believes they are at optimal production under a partially irrigated system, and will be happy if yields stay up.

Fodder beet is big at Clachanburn, but so too is lucerne silage.
About 3000t is ensiled every year.
“We spend more money making silage than we do growing beet.”
John says the feeding of lucerne silage along with the beet is the key to the overall success of the winter feeding system.
“It’s a high-protein supplement and we’ve never had a problem with deer tiring of the beet which I think is due to the lucerne silage.”
The silage is tested in April for quality and drymatter which is then used to calculate winter feeding.
The daily drymatter feed allowance is budgeted at 4% of deer liveweight and comprising two-thirds beet and one-third silage. Scales on the silage wagon keep tabs on what’s fed out.

Trophy antlers are lined up along the tiered bench seating of the Falconer’s selling arena. It’s the end result of trophy hunting season cut short.
Trophy breeding and hunting is an important income stream at Clachanburn. The Falconers have developed both an elk and red deer park which they populate with home-bred elk and red deer and other bought-in trophy animals. John does most of the guiding but also hosts other guides with paying clients. Last year 70 trophy animals were despatched and the early signs were that a similar number would be hunted this season.
However, Covid-19 brought an abrupt halt to the season. The trophy deer were brought back down from the hunting blocks for antler removal and wintering on crop. The Falconers hope the borders will be open again by the time they go out again next season.