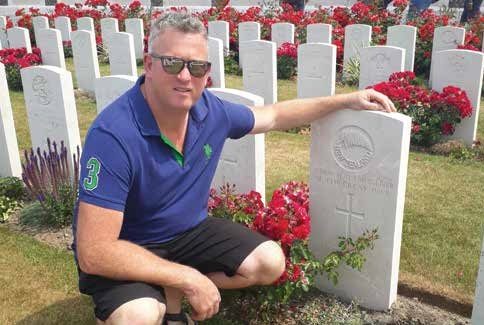 With Anzac Day imminent, Mark Chamberlain recalls a visit to a war cemetery on the other side of the world.

I’ve decided that autumn is my favourite time of year. For now. All pressure (true or imagined) seems to have disappeared for a while. The busyness of the summer holidays and the broken routine has been replaced with an almost ‘set and forget’ approach on the farm.

The cows are humming along nicely, and the season is heading for a very solid result. Along with Autumn comes Anzac Day and local communities will be out in force cleaning memorials and cenotaphs. Anzac Day, for my wife and me, makes us think of our visit to Passchendaele a couple of winters ago.

Passchendaele is a small, rural Belgian village not dissimilar to Gore or Winton. Another similarity shared by these places, despite being some 19,000km apart, is that New Zealanders are buried in both soils. Although Gallipoli is often remembered for the horrific loss of Kiwi life, it is this remote, rural, Belgian battlefield that is the home of New Zealand’s blackest day. Blackest day, darkest hour; call it what you like. Some 2500 casualties occurred in just 45 minutes. Going by NZ’s population today, that would equate to 12,000 casualties – a shocking context.

As we drove through farmland that could have passed for Southland, we came across a NZ flag proudly flying in the wind at a crossroads, marking the battlefield. We were suddenly reminded how far from home we were. This was summed up best by the words on the New Zealand monument a little further along the road, “From the uttermost ends of the earth.” Both sides incurred over 850,000 casualties in three months. Bloody horrific.

Near our farm, like many NZ rural communities, we have many monuments and memorials to the fallen who travelled that great distance, and who never returned.

It seems, at times, that in our busy lives, it is only in the run-up to Anzac day that we remember them. The lives lost, or damaged, had an immeasurable effect on rural communities. Thankfully, there has been a renewed sense of pride across NZ when remembering our returned servicemen and women. And, hopefully, a continued gratitude for the freedoms that they helped preserve.

Every district has a story and the Waikaka Valley has a beauty. A couple of farms away, Flight Sergeant Chalky White, who could best be described as robust, left his family and farm and went to fly Spitfires – fighting the Germans. He was shot down over occupied France in 1943, was captured by the Germans and within an hour, had escaped.

He made his way south to the Pyrenees – which he proceeded to climb wearing rope-soled sandals. Upon reaching Spain, he made his way to the British Consulate in Barcelona where he was promptly arrested on suspicion of being a spy. He finally made it to England and, in time, returned to his farming life.

These are the stories that must be remembered – in a day and age where ‘celebrity’ status is too easily given in an instant gratification, social media-fuelled society.

The sacrifice and hardships faced by those who left, those who were left behind and those who never made it home to their farms; should never be taken for granted. As Ange and I walked through the rows and rows of beautifully kept graves at Tyne Cot Cemetery, we were both proud and saddened to see so many Silver Ferns among the 12,000 graves, so far from their homes.

Servicemen returning to their farms, often with hidden scars, still soldiered on with a stiff upper lip. Perhaps it was this attitude that was the origin of farmers being over-represented in harrowing mental health statistics today. May we all see this Anzac Day as a timely reminder not only to keep living, but to get living. Lest we forget.