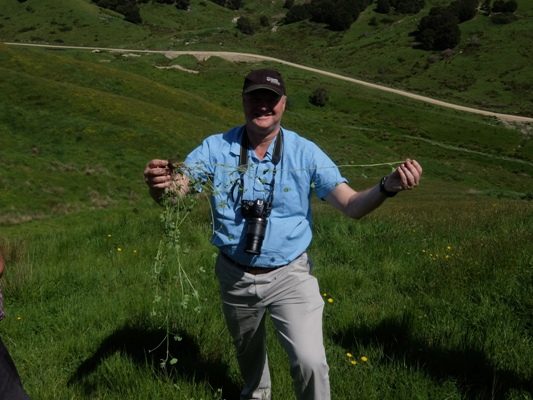 Speaking about a changing climate at the recent New Zealand Institute of Animal and Horticulture Science, Moot built a strong case for using legumes to drive highly efficient livestock systems, where animals are grown out and finished quickly therefore minimising their methane emissions.

“A legume-based system can deliver on greenhouse gas targets.

“We’ve spent tens of millions of dollars trying to create a vaccine or breed a sheep that will reduce methane emissions when we’ve got a system that will already do this, it’s called feed the animals quick and cut their heads off, that will reduce their greenhouse gas emissions quite quickly.”

‘If you don’t have areas that are intensified, you can’t feed people, you can’t have a productive economy and I won’t get my hip replaced.’

Looking at the big picture, Derrick says the fundamental driver of climate change is a burgeoning world population and the demands on this planet’s resources by close to eight billion people.

Despite all the talk, fossil fuels continue to be burned at an ever-increasing rate, pumping carbon dioxide into the atmosphere unabated – and the main driver of this energy production and consumption is population growth.

“It’s not something that people want to talk about.”

This population needs to be fed and Derrick credits the intensification enabled by the Green Revolution, particularly the use of nitrogen (N), to the fact that not more swathes of forestry have been cleared to make way for food production.

It now takes 0.6 billion hectares of land to feed the world population, without intensification, 2b ha would be required.

You either have intensification or deforestation, he says.

In NZ, N has been a critical part of agricultural intensification and despite the exponential rise in the use of bagged N, grass-dominant pastures remain N deficient. Carbon dioxide is also emitted in the production of N fertilisers.

Legumes are the most environmentally friendly and cost-effective way he can think of to get N into pastoral systems and will fix N at a rate of 30kg of N/1000kg drymatter (DM) grown.

Moot says as part of the drive to intensify livestock farming, farmers have had to learn how to manage plants to drive productivity, but this intensification has also enabled farmers to set aside areas of native bush, plant trees and allow the regeneration of grasslands.

“If you don’t have areas that are intensified, you can’t feed people, you can’t have a productive economy and I won’t get my hip replaced.”

Once the Andersons learned how to effectively manage lucerne pastures, annual lamb production soared from 90 tonnes of weaned lamb to 170t and lamb growth rates went from an average of 170g/day to 300g/head/day.

These changes have driven profitability and this has allowed investment in environmental protection and enhancement.

While the practice of “spray and pray” has come under scrutiny, Moot, who describes over-sowing legumes on to hill country as “aerial no-till” says this method of improving pastures has a low carbon footprint.

The N introduced through the legume helps break down thatch (which typically has a 40:1 carbon nitrogen ratio) stimulating the N cycle and providing N to chronically N-depleted pastures.

“There is minimal risk of N leaching from hill country because these pastures are so N deficient.”

Getting N in the system can increase drymatter production on hill country by 75%, so long as basic science is adhered to and molybdenum levels are adequate. Legumes require molybdenum.

Managed correctly, legumes can drive daily lamb growth rates of 300g and over, which means lambs can be grown and finished very quickly post weaning in about 33 days.

He was critical of “regenerative” farming saying it contributes more to greenhouse emissions than intensive systems because animals are slower growing and may take more than 100 days to finish. This is an extra 70 days-worth of methane over a lamb finished in an efficient, intensive system.

He congratulated this country’s sheep producers who, despite a declining ewe flock, have increased carcase weights and lambing percentages over the past 20 years by better feeding their sheep.

This in itself has reduced the sector’s methane footprint.