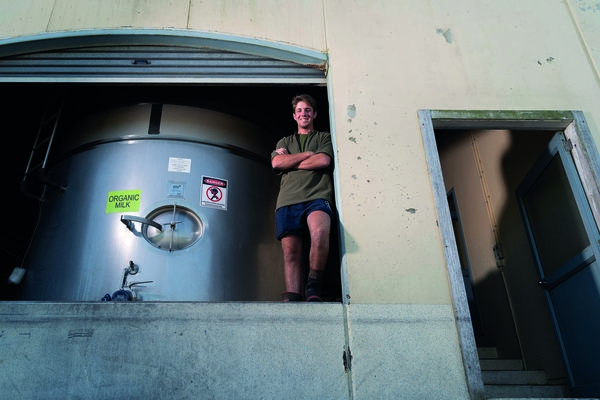 The simplicity of an organic system has many benefits for a Manawatu dairy trainee. Jackie Harrigan reports.

Learning the craft of dairy farming on an organic farm has meant Max de Vre has learnt a simplified system on an extensive property.

The 19-year old has only ever worked for Wayne Moxham on his Levin-based Moxham Diaries property – a stint there relief milking every weekend for a year and a half while has was a kid was followed up with a job offer when Max was marking time in Year 13 at college.

“I wasn’t really doing much and thought what am I doing here? – I might as well be out earning some dollars.”

That was two years ago and now he is Wayne’s longest-serving full-timer on the 500-cow property on the south side of the Manawatu river. Max is helping to train the international travellers who come and work for Wayne on his cluster of three properties and is engrossed in Primary ITO training.

“I have finished food safety and milk quality and the milk harvesting module and now I’m up to Level 3 Animal Husbandry – that’s the big one.”

He attends day courses in Feilding and says it’s interesting talking about his organic farm experiences with the other trainees.

“They are always getting the cows in for this and that animal health treatment – I don’t really see the need for all those treatments – our cows only ever come in for milking – the rest of the time they are just hanging out in their paddocks. – they are not any smaller than conventionally farmed cows, and they seem pretty happy.”

The Friesian cows produce on average 440kg milksolids (MS)/cow each season, with a target of 220,000kg MS for the herd. The herd is split into two with older cows in the main herd and young ones in the other group.

The 260-hectare farm next to the river is the largest in the Moxham cluster of three in the Koputaroa district, one of the others of which is organic and the last conventional, but run under organic principles, supplying Open Country Dairies.

Having the three farms in a cluster is handy, as the conventional farm is a good backstop if a cow becomes really ill and conventional treatments are needed.

But that has only happened once while Max has been at the property.

“The vets are called and are always trying to get us to use that out clause – but if a cow goes to the conventional farm she can’t come back to the organic farm to milk – so we are much keener on letting her self-heal and bringing her back into the milking herd.”

Wayne’s farms have been organic for more than 10 years and all the calving is done on Max’s farm and then cows sent to the other organic block when they are past the colostrum stage and they have enough to fire up the other dairy shed.

Most of the herd is spring calving, with just 80 cows milked through the winter, when Max says it is good to keep some income coming in through the winter with the Fonterra winter milking premium on top of the organic payout.

Max loves the working outside aspect of farming and working with the animals and appreciates the variety of tasks around the farm.

“Farming is good physical work – you always know you have done something.”

Both of his older brothers are in trades in nearly Levin and he loves the fact that farming is teaching him lots of general skills alongside the animal skills.

“I have learnt lots of plumbing, building and mechanic and electrical skills alongside the farming. There are so many things to learn on the farm.”

The role is also made interesting by the young international people that Wayne has working on the farms.

At the moment there is a young Spanish girl who had never been on a farm before and Nina a German worker on the other organic farm and a French couple who are sharing the workload.

“Wayne seems to get emails from lots of young international people wanting to come and work on the farm – it makes it interesting learning about them too.”

“But it’s not been a huge learning curve because it’s the way that I have learnt to farm,” he says.

He can see the sense in running simple systems and keeping the costs down.

“The system is just very simple and it makes our job a lot easier,” he added.

“We have got cows in the herd that are 15 years old – they last pretty well.”

The herd is fed grass and grass silage with up to 3000 bales of silage made on the farms, a runoff and a lease block in nearby Shannon.

“That’s the most we have ever made – we have about 1000 bales stacked up at the moment.”

Crops of kale and swedes are grown for the winter, and some cows are wintered on the runoff.

“We don’t use any other supplement – there are organic supplements that you can get but they are ridiculously expensive.”

Organic minerals are fed out in tubs, though, which is also expensive as it comes in from Australia.

Teat spray is mixed up from organic tea tree oil and fish oil from Sealord and sprayed on to the cows’ teats at milking and homeopathic remedies are used added to the water in troughs for many different conditions.

The first aid cabinet is a series of bottles and vials of the homeopathic treatments, with a list taped to the wall of which ones to use.

“The treatments help the cows to heal themselves , and we will help the process along by resting the lame cows in the hospital paddock close to the dairy shed.”

Any cows with mastitis have the quarter stripped and are also treated with homeopathic treatments.

“We keep stripping it until she heals up – they self-heal 99% of the time given enough time.

“That’s what they are built for – to heal themselves – the treatments just help them along.”

The 54-bale rotary shed is simple too with no “flash technology”, Max says.

The platform is next to the Manawatu river and is unirrigated apart from the effluent irrigator which needs shifting every couple of days or diverting into the tank in bad weather.

The farm’s organic status is audited by Asure Quality every year, and that’s a nervous time for the team, Max says.

“It’s important to show we have all the systems in place – we wouldn’t want to lose our organic status.

“Many people don’t understand how in-depth and strict the audit is.”

Cows are mated by AI to A2A2 bulls for six weeks and then Hereford bulls used, with all the beef calves sold at four days old. This season for the first time all the heifers have been mated to Galloway bulls which are smaller but still throw solid beef-cross calves to avoid selling any bobby calves.

While Max enjoys the organic farm and gets on well with Wayne the boss, he says one day he will definitely be interested in seeing how things happen on a conventional farm.

“It seems like a lot of extra work though!”