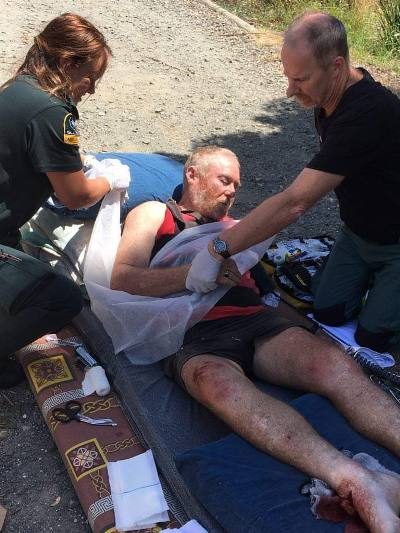 One afternoon in February Chris Biddles made a decision on his quad that he would not have made at 8am. He’s still suffering the consequences, but thanks to surgeons, friends and family is making a good recovery.

“His prognosis is poor with an extremely high risk of avascular necrosis (bone or tissue death caused by deprivation of blood supply). Patient can expect long-term pain and lack of mobility.”

That was the only time I nearly cried. Despite the above, three days earlier, February 1 would have to be the luckiest day of my life.

To understand this we need to go back to November 2018 when I decided to get a total knee replacement. This was booked for February 26. For eight weeks through December and January we worked seven days a week having only Christmas Day and New Year’s Day off and one Saturday fishing.

We worked long hours so I could have eight weeks off-farm giving the new knee every chance to recover properly. By the end of January I was exhausted and I knew it. I only had a couple more days’ stock work to do and we were a month ahead and I would be ready for that new knee.

However, on the afternoon of February 1 I made a stupid and dumb decision. That has changed everything for me.

The biggest message I took home was that at 2pm you would make a decision on your quad that you would not make at 8am.

I was on my quad moving weaned cows, my dogs jumped off the quad and for some ridiculous reason I turned back and went down a hill I had no intention of going down. The quad went end-over-end. I was catapulted off with the quad following behind me.

The next I knew the quad was upside down with the back bars sitting on my ankle. I wrenched my ankle out and knew immediately it was bad. I thought if I could pull myself up on one leg I might be able to tip the quad back on its wheels to fetch help.

That was when I discovered I had a broken shoulder. With no radio or telephone service I had to drag myself with one hand and one foot 30 metres up the hill to reach higher ground. I then radioed a Mayday twice.

Fortunately my daughter Joanne and son-in-law Charles had just come to our side of the farm to check a water tank. They heard the Mayday.

This was the second bit of luck for me. The first being that the quad did not land on my back or head.

Joanne called 111 while Charles came to collect me. Joanne told 111 she had no idea of my injuries but that the ambulance would not reach me. That was the next bit of luck, they dispatched a helicopter at the same time as the ambulance.

Both arrived together where Joanne and Charles had me on a mattress at their home. The paramedics began cutting my sock and my shirt to stabilise the injuries. The ankle was a compound fracture with bone and flesh protruding badly. The shoulder was more difficult to work out but for some reason I knew that the ball at the top of the arm was not sitting in the socket. It turns out that ball was broken like a boiled egg and well out of place.

Within two hours of the accident I was landing at Whangarei Base Hospital. The medics and ED people were fantastic.

At radiology I learnt of my next piece of luck. They told me I had an amazingly talented orthopaedic surgeon who would be operating.

My luck continued as despite all this trauma the wound did not get infected.

I had three weeks in hospital, six weeks with the external metal work, then two weeks in plaster. As I write this at the eighth week since the accident I am now in a moon boot, still confined to a wheelchair. After 12 weeks I will be able to start load-bearing on the ankle and learn to walk again. I am now undergoing intense physiotherapy on shoulder and ankle to improve mobility.

Thankfully my friends and family, while being very helpful in all manner of ways, have not felt sorry for me but rather given me the shit I deserve, they also allow me to do as much as possible myself.

The day in hospital that we discovered I could operate a wheelchair with one leg and one arm was huge to me and I was like a kid up and down the corridor. I was going to have reasonable independence. I have refused to allow myself any down days as that would be a slippery slope.

I sincerely hope readers will learn from what has happened with me. Eight years ago I attended a seminar in Southland while on an Angus tour. The presentation was from a Scotsman who contracted to ACC and had done a three-month study with friends driving quads while wired through their helmets. I took home several messages from this including how hard riding a quad is on your back and the need to walk as much as possible in between riding.

The biggest message I took home was that at 2pm you would make a decision on your quad that you would not make at 8am. I have remembered and used that information a number of times in the eight years since learning it. However in this case I was just so exhausted that my brain did not allow me to question the unintended decision. We have discussed this on the farm and now include in our team meetings people’s state of mind. I hope that this will help avoid future accidents.

I do not believe quads are dangerous, but the decisions that we make on them can be incredibly dangerous.

We as farmers must be aware what fatigue can cost. I am incredibly lucky, I will walk again, albeit not as well as before. Hopefully I will regain most of my shoulder use, it could so easily have been different.

In those first 24 hours I filled many swear jars but the medical people seemed to understand, I have had outstanding support from family, friends, neighbours and most of all the health system. However I still have my buggered knee!